Back in December 2007, we quite heavily criticised the paper of Douglass et al (in press at IJoC) which purported to show that models and data were inconsistent when it came to the trends in the tropical troposphere. There were two strands to our critique: i) that the statistical test they used was not appropriate and ii) that they did not acknowledge the true structural uncertainty in the observations. Most subsequent discussion has been related to the statistical issue, but the second point is perhaps more important.

Even when Douglass et al was written, those authors were aware that there were serious biases in the radiosonde data (they had been reported in Sherwood et al, 2005 and elsewhere), and that there were multiple attempts to objectively address the problems and to come up with more homogeneous analyses. We mentioned the RAOBCORE project at the time and noted the big difference using their version 1.4 vs 1.2 made to the comparison (a difference nowhere mentioned in Douglass et al’s original accepted paper which only reported on v1.2 despite them being aware of the issue). However, there are at least three new papers in press that independently tackle the issue, and their results go a long towards addressing the problems.

The papers in question (all in press at the Journal of Climate) are from Lanzante and Free, Sherwood et al and Haimberger et al. Note that there are additionally at least two other papers on the way which are relevant but which are not yet publicly available – we’ll mention them when they appear.

First off, Lanzante and Free do an excellent job in really pinning down the biases (compared to satellites and models) of the standard homogenised radiosonde networks (RATPAC2 and HadAT2). These biases undoubtedly exist and the issue is to work out whether they are due to instrumental problems, sampling issues, errors in model physics or errors in model forcings (or all of the above!). In the global mean, there isn’t much of an issue for the mid-troposphere – the models and data track each other when you expect they would (the long term trends or after volcanoes, and don’t where you expect them not to, such as during La Niña/El Niño events which occur at different times in models and observations). Similarly the lower stratospheric trends and variability is reasonably matched except for the post-Pinatubo period where the sondes cool uniformly more than the models – possibly due to underestimation of the stratospheric ozone trend. However, the big discrepancies are in the tropics. 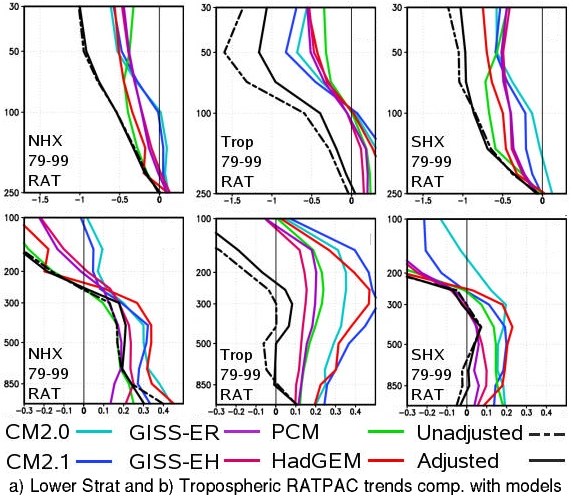 The errors due to the homogenisation procedures are unfortunately large (as also attested to by McCarthy et al (2008)) and could (according to L&F) be responsible for all of the difference from the moist adiabat (the expected amplification with height). This is because the distribution of sondes in the tropics is very sparse, there have been a lot of changes of instrumentation, and the known biases (related to solar heating for instance, giving warm biases during daylight) aren’t necessarily easy to correct. Sherwood et al, notably, discuss how to minimise three specific problems in any homogenisation procedure: missing change points, incorrectly detecting change points and problems with ‘bad neighbours’.

The differences from the expected profile are all towards cooling – and this leads to even more cooling in the stratosphere than the models predict as well as cooling in the troposphere (the bias most often remarked upon). The fact that the bias is the same sign throughout the column (despite the very different physics in each region) is a clue that this is unlikely to be real.

Thus different groups have been trying to use different techniques to improve the homogenisation. Haimberger et al propose two approaches – one is to use the reanalysis datasets (ERA-40) as a guide, and a second is an objective way of looking for break points in the individual timeseries. The first approach (adopted in the RAOBCORE products) can bring new information because the reanalysis assimilates a lot more data than just the sondes temperatures – satellite products for water vapour, temperature, winds etc. – and tries to come up with a consistent picture. Unfortunately, the reanalysis itself has jumps as new sources of data (new satellites for instance) get assimilated, and so there are limits to how much use it is – and since they assimilate MSU data as well, the results aren’t necessarily independent of the uncertain MSU products either. 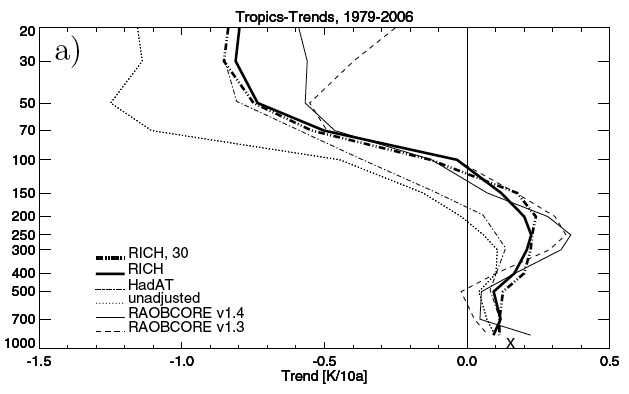 The second approach is denoted RICH (Radiosonde Innovation Composite Homogenization). This uses a similar method as HadAT2 to detect change points but uses the RAOBCORE product as a background. This works because the problems that arise in the reanalysis are not going to be correlated to the problems in an individual sonde. As can be seen this produces significantly different results from the standard products (like HadAT). RICH also seems more physically consistent than RAOBCORE, particularly in the lower troposphere. 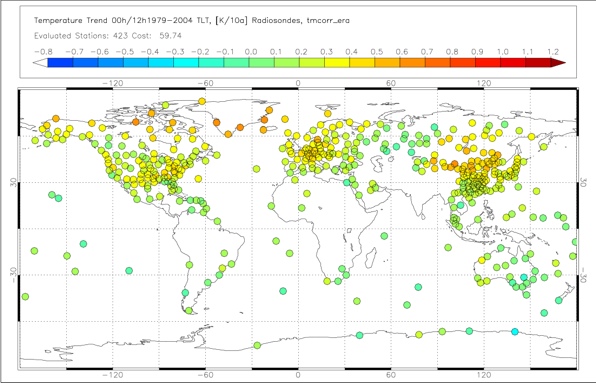 The results from RICH (shown here for the individual locations), show up quite dramatically why the tropics have much greater uncertainty than the Northern Hemisphere mid-latitudes. The number and density of stations there is dramatically less. 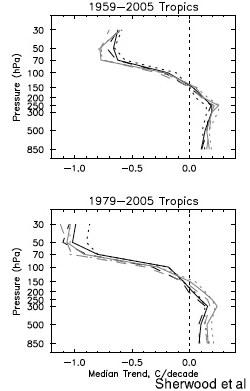 Sherwood et al (pdf) take a different, iterative, approach that involves using the wind shear measurements (taken at the same time as the temperatures) as a consistency check. These measurements can be linked (via the thermal wind equation to temperature gradients) but are not subject to the same problems in instrumentation. They specifically avoid using the satellite data in the process, so that this can serve as a check on the final product.

So what do these authors find? Each of the different, and independent, methodologies ends up finding pretty much the same thing. If you do a better job on the homogenisation, you end up with answers closer to the expected moist adiabatic amplification of the trend with height. It bears stating again that the expected amplification has nothing to do with the greenhouse effect – it is just a function of the surface warming. Note also that this result was nowhere built in to the analyses and so to find that the most consistent readings produce just that is a validation of all the approaches. 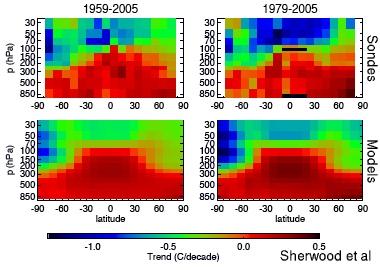 To conclude, the structural uncertainty in the radiosonde data is large, and while these attempts to improve the homogenisation are a step in the right direction, the degree of adjustment is a concern. The bottom line is that the observations may well be closer to the model data than preliminary analyses suggested but that the structural uncertainty remains high. Coming to dramatic conclusions based on any of this remains unwise.

Update: As luck would have it, a commentary from Peter Thorne and a paper from Allen and Sherwood have just come out in Nature Geoscience. In it they extend the idea mentioned above of using wind shear as a check on the temperature trends and come up with a another new estimate of the changes. This estimate is again much closer to the moist adiabat and the climate models. The figure in Thorne’s piece is quite revealing and underlines the points made above: 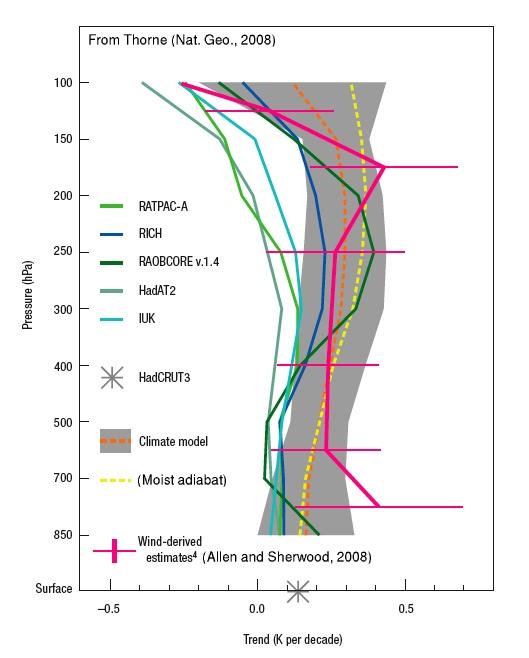 He concludes: “The new analysis adds to the growing body of evidence suggesting that these discrepancies are most likely the result of inaccuracies in the observed temperature record rather than fundamental model errors.”