Many are obviously curious about whether certain current regional environmental changes are traceable to global climate change. There are a number of large-scale changes that clearly qualify—rapid warming of the arctic/sub-arctic regions for example, and earlier spring onset in the northern hemisphere and the associated phenological changes in plants and animals. But as one moves to smaller scales of space or time, global-to-local connections become more difficult to establish. This is due to the combined effect of the resolutions of climate models, the intrinsic variability of the system and the empirical climatic, environmental, or ecological data—the signal to noise ratio of possible causes and observed effects. Thus recent work by ecologists, climate scientists, and hydrologists in the western United States relating global climate change, regional climate change, and regional ecological change is of great significance. Together, their results show an increasing ability to link the chain at smaller and presumably more viscerally meaningful and politically tractable scales. 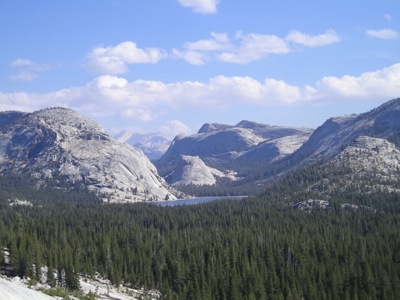 For instance, a couple of weeks ago, a paper in Science by Phil van Mantgem of the USGS, and others, showed that over the last few decades, background levels of tree mortality have been increasing in undisturbed old-growth forests in the western United States, without the accompanying increase in tree “recruitment” (new trees) that would balance the ledger over time. Background mortality is the regular ongoing process of tree death, un-related to the more visible, catastrophic mortality caused by such events as fires, insect attacks, and windstorms, and typically is less than 1% per year. It is that portion of tree death due to the direct and indirect effects of tree competition, climate (often manifest as water stress), and old age. Because many things can affect background mortality, van Mantgem et. al. were very careful to minimize the potential for other possible explanatory variables via their selection of study sites, while still maintaining a relatively long record over a wide geographic area. These other possible causes include, especially, increases in crowding (density; a notorious confounding factor arising from previous disturbances and/or fire suppression), and edge effects (trees close to an
opening experience a generally warmer and drier micro-climate than those in the forest interior).

They found that in each of three regions, the Pacific Northwest, California, and the Interior West, mortality rates have doubled in 17 to 29 years (depending on location), and have been doing so across all dominant species, all size classes, and all elevations. The authors show with downscaled climate information that the increasing mortality rates likely corresponds to summer soil moisture stress increases over that time that are driven by increases in temperature with little or no change in precipitation in these regions. Fortunately, natural background mortality rates in western forests are typically less than 0.5% per year, so rate doublings over ~20-30 years, by themselves, will not have large immediate impacts. What the longer term changes will be is an open question however, depending on future climate and tree recruitment/mortality rates. Nevertheless, the authors have shown clearly that mortality rates have been increasing over the last ~30 years. Thus the $64,000 question: are these changes attributable in part or all to human-induced global warming?

Yes, argues a pair of December papers in the Journal of Climate, and a 2008 work in Science. The studies, by Bonfils et. al. (2008), Pierce et. al. (2008), and Barnett et. al. (2008), link observed western temperature and temperature-induced snowmelt processes to human-forced (greenhouse gases, ozone, and aerosols) global climate changes. The authors used various combinations of three GCMs, two statistical downscaling techniques (to account for micro-climate effects that aren’t resolved in the GCMs), and a high resolution hydrology model to experiment with the various possible causes of the observed climatic changes and the robustness of the methods. The possible causes included the usual list of suspects: natural climatic variability, the human-induced forcings just mentioned, and non-human forcings (solar and volcanic). Climate models were chosen specifically for their ability to account for important, natural climatic fluctuations in the western US that influence temperature, precipitation and snowpack dynamics, particularly the Pacific Decadal Oscillation, and El Niño/La Niña oscillations, and/or their ability to generate the daily climatic values necessary for input to the hydrologic model. The relevant climate variables included various subsets of minimum and maximum daily temperatures from January to March (JFM), their corresponding monthly averages, degree days (days with mean T>0ºC), and the ratio of Snow Water Equivalent (SWE) to water year precipitation (P). In each case, multiple hundred year control runs were generated with two GCMs to isolate the natural variability, and then forced runs from previous model intercomparison projects were used to identify the impacts of the various forcings.

The results? The authors estimate that about 50% of the April 1 SWE equivalent, and 60% of river discharge date advances and January-to-March temperature increases, cannot be accounted for by either natural variability or non-human forcings. Bonfils et al also note that the decreases in SWE are due to January-to-March temperature increases, not winter precipitation decreases, as the observational record over the last several decades shows. The April snow is a key variable, for along with spring through early fall temperatures, it has a great bearing on growing season soil moisture status throughout the western United States, and thus directly on forest productivity and demographic processes.