You are here: Home / Climate Science / Climate modelling / Temperature Variations in Past Centuries and the so-called "Hockey Stick"
Translations: (

The term “Hockey Stick” was coined by the former head of NOAA’s Geophysical Fluid Dynamics Laboratory, Jerry Mahlman, to describe the pattern common to numerous proxy and model-based estimates of Northern Hemisphere mean temperature changes over the past millennium. This pattern includes a long-term cooling trend from the so-called “Medieval Warm Period” (broadly speaking, the 10th-mid 14th centuries) through the “Little Ice Age” (broadly speaking, the mid 15th-19th centuries), followed by a rapid warming during the 20th century that culminates in anomalous late 20th century warmth (Figure 1). Numerous myths regarding the “hockey stick” can be found on various non-peer reviewed websites and other non-scientific venues.

Estimates of Northern Hemisphere average temperature changes from climate model simulations employing estimates of long-term natural (e.g. volcanic and solar) and modern anthropogenic (greenhouse gas and sulphate aerosol) radiative forcings of climate agree well, in large part, with the empirical, proxy-based reconstructions. One notable exception is a study by Gonzalez-Rouco et al (2003) that makes use of a dramatically larger estimate of past natural (solar and volcanic) radiative forcing than is accepted in most studies, and exhibits greater variability than other models (Figure 2). Yet, as in all of the other simulations, even in this case unprecedented warmth is indicated for the late 20th century.

The simulations all show that it is not possible to explain the anomalous late 20th century warmth without including the contribution from anthropogenic forcing factors, and, in particular, modern greenhouse gas concentration increases. A healthy, vigorous debate can be found in the legitimate peer-reviewed climate research literature with regard to the precise details of empirically and model-based estimates of climate changes in past centuries, and it remains a challenge to reduce the substantial uncertainties that currently exist. Despite current uncertainties, it nonetheless remains a widespread view among paleoclimate researchers that late 20th century hemispheric-scale warmth is anomalous in a long-term (at least millennial) context, and that anthropogenic factors likely play an important role in explaining the anomalous recent warmth.

Reviews of past scientific research in this area can be found in the following peer-reviewed journal articles: 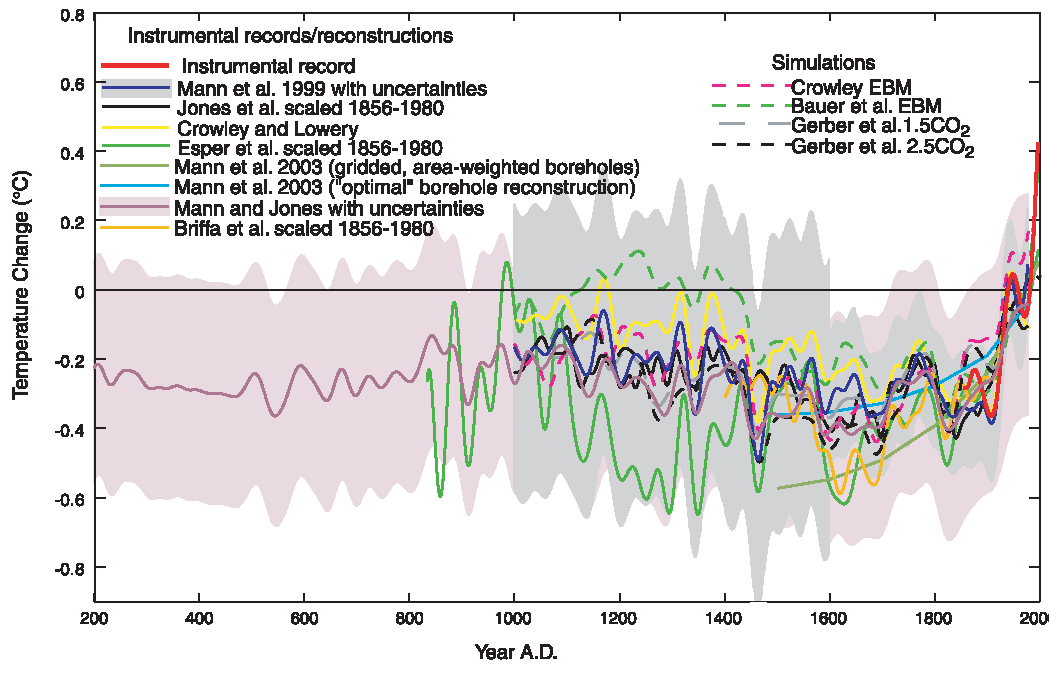 FIGURE 1 [reprinted from Mann et al, 2003, Eos, (C) American Geophysical Union]. Comparison of proxy-based Northern Hemisphere (NH) temperature reconstructions (Jones et al., 1998; Mann et al., 1999; Crowley and Lowery, 2000) with model simulations of NH mean temperature changes over the past millennium based on estimated radiative forcing histories (Crowley, 2000; Gerber et al., 2002–results shown for both a 1.5oC/2xCO2 and 2.5oC/2xCO2 sensitivity; Bauer et al., 2003). Also shown are two independent reconstructions of warm-season extratropical continental NH temperatures (Briffa et al., 2001; Esper et al., 2002) and an extension back through the past two thousand years based on eight long proxy temperature series chosen for their ability to retain long-term trends (Mann and Jones, 2003). All reconstructions have been scaled to the annual, full Northern Hemisphere mean, over an overlapping period (1856-1980), using the NH instrumental record (Jones et al., 1999) for comparison, and have been smoothed on time scales of >40 years to highlight the long-term variations. The smoothed instrumental record (1856-2003) is also shown. The gray/pink shading indicates estimated two-standard error uncertainties in the Mann et al. (1999) and Mann and Jones (2003) reconstructions. Also shown are reconstructions of ground surface temperatures (GST) based on appropriately areally-averaged (Briffa and Osborn, 2002; Mann et al., 2003) continental borehole data (Huang et al., 2000), and hemispheric surface air temperature trends, determined by optimal regression (Mann et al., 2003) from the GST estimates. All series are shown with respect to the 1961-90 base period. [added 1/12/05: It should be noted (thanks to S. Huang for pointing this out), that the two borehole curves shown in this plot suffer from a small error in the areal weighting normalization. Further discussion, and corrected versions of the borehole temperature estimates can be found in Rutherford and Mann (2004) (and in the Jones and Mann, 2004 article discussed above)]

FIGURE 2 [reprinted from Jones and Mann, 2004, Reviews of Geophysics, (C) American Geophysical Union]. Model-based estimates of northern hemisphere temperature variations over the past two millennia. Shown are 40 year smoothed series. The simulations are based on varying radiative forcing histories employing a hierarchy of models including one-dimensional energy based models (Crowley, 2000), two-dimensional reduced complexity models (Bauer et al, 2003; Bertrand et al, 2002; Gerber et al, 2003), and full three-dimensional coupled atmosphere-ocean general circulation (’GKSS’-Gonzalez-Rouco et al, 2003; ‘CSM’–Ammann et al., submitted). Shown for comparison is the instrumental northern hemisphere record 1856-2003 (Jones et al, 1999), and the proxy-based estimate of Mann and Jones (2003) extended through 1995, with its 95% confidence interval. Models have been aligned vertically to have the same mean over the common 1856-1980 period as the instrumental series (which is assigned zero mean during the 1961-1990 reference period).