In a new review paper in Nature this week, Andreae, Jones and Cox expand on the idea that uncertainty in climate sensitivity is directly related to uncertainty in present day aerosol forcing (see also this New Scientist commentary). This was discussed here a couple of months back in the Global Dimming and the climateprediction.net posts, and so it is worth revisiting the question in the light of their analysis.

Over the observational period there is a great deal of uncertainty in the climate forcings – mainly (though not exclusively) associated with various aerosol effects. Given this uncertainty, it has therefore been very difficult to calculate climate sensitivity (how much the globe warms as a result of a change in forcings) using the modern changes in global temperature. Such estimates have tended to have very broad error bars.

The basic idea of the AJC paper is that any uncertainty in aerosol effects (which is large) translates directly into uncertainty in climate sensitivity. This gives a range of climate sensitivity that is much larger than the IPCC range (1.5 to 4.5 deg C for a doubling of CO2) , and which therefore translates to wider bounds on possible climate projections both at the high end and low end.

We contended here before that this is a bit of a leap, since there are other constraints on climate sensitivity (such as the last ice age) and other sources of uncertainty (solar, ozone, land use, etc.). Both of these factors reduce the direct influence that the aerosol forcing alone should have on our ideas of climate sensitivity.

This paper is nonetheless interesting for the link that they make to the carbon cycle and the potential for feedbacks that may amplify the CO2 concentration in the future that will depend on the warming, and hence on climate sensitivity. However, the fundamental point which underlies all their calculations is the link between aerosol forcing and sensitivity, which I would argue is not as strong as they have posited. (James Annan has also made a similar point). 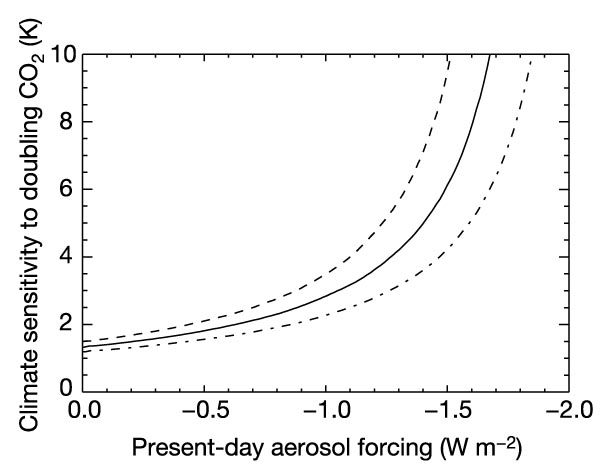 To demonstrate why this is may be an overstatement, one can look at the results from the GISS ModelE simulations for the 20th Century (illustrated here). In these experiments the climate sensitivity was 2.7 deg C for a doubling of CO2, the net aerosol forcing from 1940 to 2000 was around -0.7 W/m2 (55% of the total forcing, -1.27, from 1850 to 2000), and the ocean uptake of heat was well-matched to recent observations. However, this amount of present day aerosol forcing would imply a sensitivity of about 4 deg C according to figure 1 in AJC (right), with 2.7 outside their error bar. What is therefore missing from their calculation? Firstly, there is approximately 0.35 in other forcings over this period (from solar, tropospheric ozone, land use and volcanoes), which if taken into account moves the curve down and to the right. Secondly, there is more uncertainty in the GHG and other forcing terms than they allow for. This actually widens the error bars so much that for large aerosol forcings, you cannot rule out even zero climate sensitivity. These details are not inconsequential because most of the conclusions in their paper stem from the rapid increase in climate sensitivity between 1.0 and 2.0 W/m2 aerosol forcing. 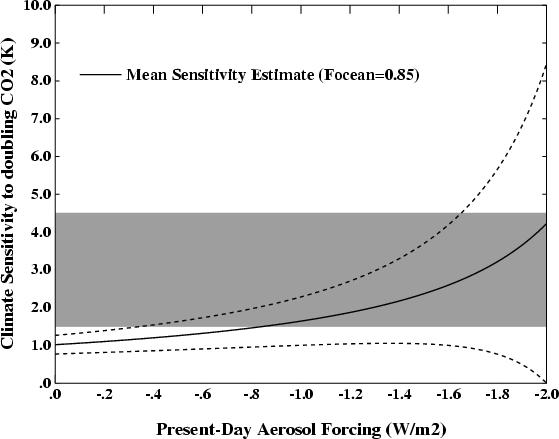 I have therefore re-calculated their Figure 1, including the terms for the other forcings and their uncertainties along with the aerosol forcing estimates, and using the ocean heat content changes from Hansen et al (2005) (around 0.85 W/m2 – a smaller value for the ocean heat imbalance moves the curve even further to the right). The IPCC range is shaded. (Note that this calculation doesn’t exactly match the GCM result since I haven’t exactly calibrated the ocean heat content or temperature change from 1940 to 2000 – it’s a good enough guess for this purpose though). What is clear is that although the net aerosol forcing is indeed an important determinant of the uncertainty, it is not overwhelming. Indeed, a broad range of net present-day aerosol forcings of (-0.5 to over -2.0) could still compatible with the IPCC estimates for climate sensitivity (within one sigma of the total forcing error). This is a quite different conclusion to that drawn by AJC.

Climate sensitivity is indeed uncertain, but the classic IPCC range (in my opinion) is still a good ‘likely’ estimate. Any suggestion that climate sensitivities are significantly larger (or much smaller) need to be accompanied by an explanation of how forcings and temperature response at the peak of the last ice age (for instance) can be dealt with or explained away. There are a number of papers in the pipeline that tackle this question from a number of different angles (using multiple ensembles for the last ice age, better observational constraints on the climateprediction.net ensembles etc.). I will venture a guess that most of these approaches will actually reduce the error bars on the sensitivity – not increase them.