Last month a paper I co-authored received considerable media attention. Headlines read “Experts warn North Pole will be ‘ice free’ by 2040”, “The Big Melt: Loss of Sea Ice Snowballs“, and “Arctic Clear for Summer Sailing by 2040: Models Predict Rapid Decline of Sea Ice”. The story also reached NPR, BBC, CBC, the Discovery channel, and Fox News, among others. Dr. Marika Holland, the first author of the paper, was inundated with media attention. About a dozen journalists contacted me too. I was impressed by the questions they posed — questions that probably reflect what the public most wants to know. However, after giving lengthy interviews, I would read the resulting article and see my explanations boiled down to a few lines. In this essay, I’d like to explain the science in the paper and give my answers to the most often asked questions.

In our paper (with co-author Bruno Tremblay), we examined the September Arctic sea ice cover in the 20th and 21st centuries in climate models, and found occasional decades of very rapid retreat. The most extreme case was a decrease from 6 to 2 million square kilometers in a decade (see Fig 1). This is about 4 times faster than the decline that has been observed in the past decade. 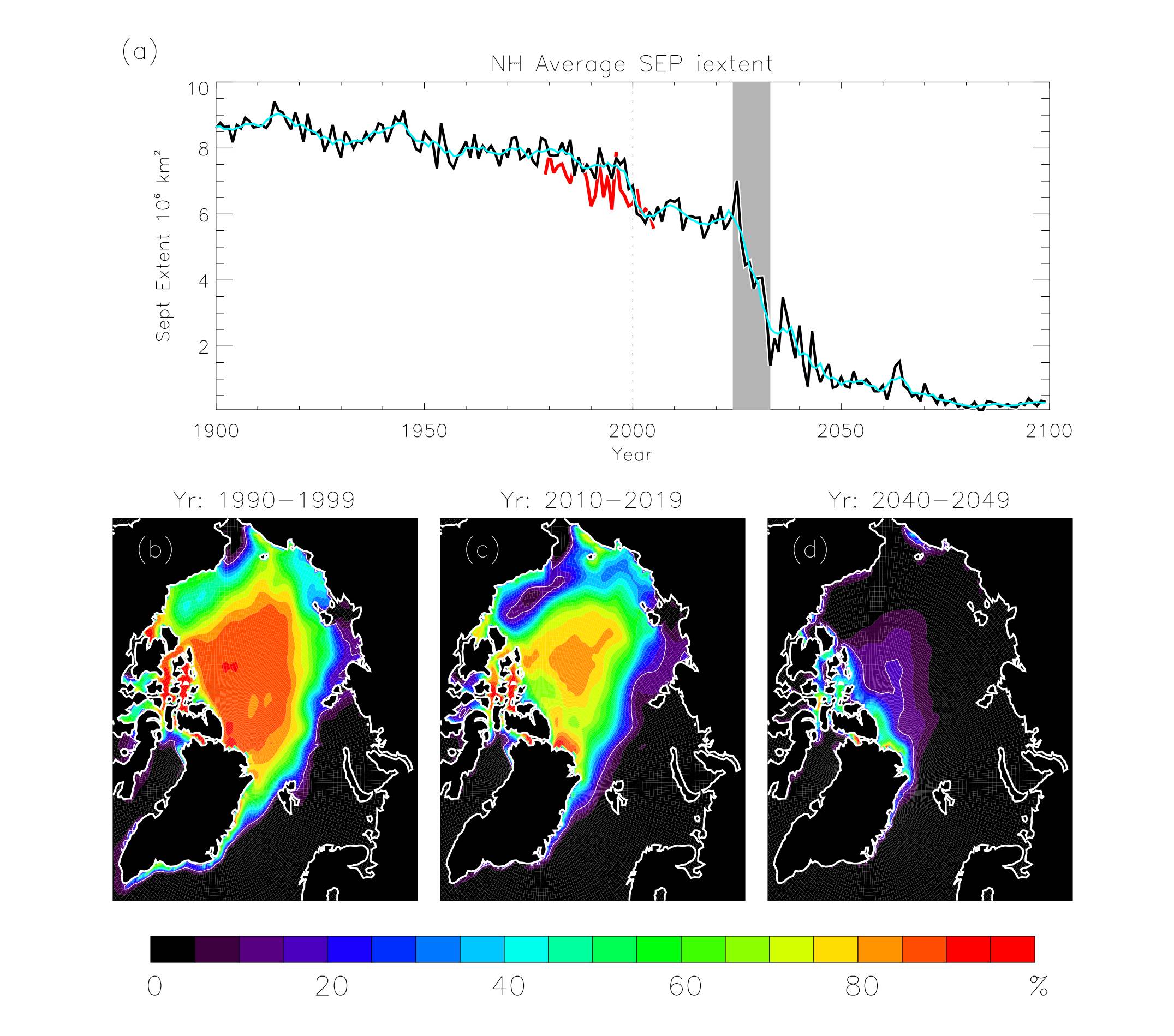 Figure 1: (a) Northern Hemisphere sea ice extent in September from one integration of the Community Climate System Model version 3 (CCSM3) with observations from the satellite era shown in red. The light blue line is a 5-yr running mean. The three lower panels show the September ice concentration (ice floes are separated by open water) in three select decades.

It is common practice to run climate models multiple times with slight variations to the initial conditions. Because the system is chaotic, the natural variability in each run is random and uncorrelated from one run to the next. When an ensemble of runs is averaged, the natural variability is reduced in the ensemble mean, and it is easier to detect a significant trend.

An ensemble of runs offers an opportunity to evaluate rare events too, such as extreme sea ice decay. We were in search of evidence for “tipping points“, which several authors have speculated might exist in sea ice. RealClimate places sea ice in the category of systems with “known unknowns” with regard to tipping points. This means we know there are thresholds involving sea ice (e.g., it can cease to exist), but we don’t know when, or if, the climate will arrive at one.

Only one of seven ensemble members had an event as extreme as quoted above, and it resulted in near ice-free conditions for September by 2040 (see Fig 1d). (The sea ice grows back at least for some portion of winter for the duration of the 21st century.) However, every ensemble member had an event 5 years or longer at some time in the 21st century when the sea ice retreat was about 3 times faster than the observed retreat since 2001 (see Fig 2). These ensemble members took about 5–10 years longer to become nearly ice-free in September than the most extreme case.

As illustrated in Fig 1, the sea ice retreat accelerates during the 21st century as the ice decays and more sunlight is absorbed by the ocean (the positive ice-albedo feedback). Increasing ocean heat transport under the sea ice adds to the melt back. The retreat appears abrupt when natural variability in the ocean heat transport into the Arctic Ocean is anomalously high. We did not find clear evidence of a threshold, which can be difficult to identify given the variability and complexity of the climate system. Therefore we can neither verify or rule-out the existence of a tipping point. Regardless, the rapid declines seen in our runs are a serious concern. 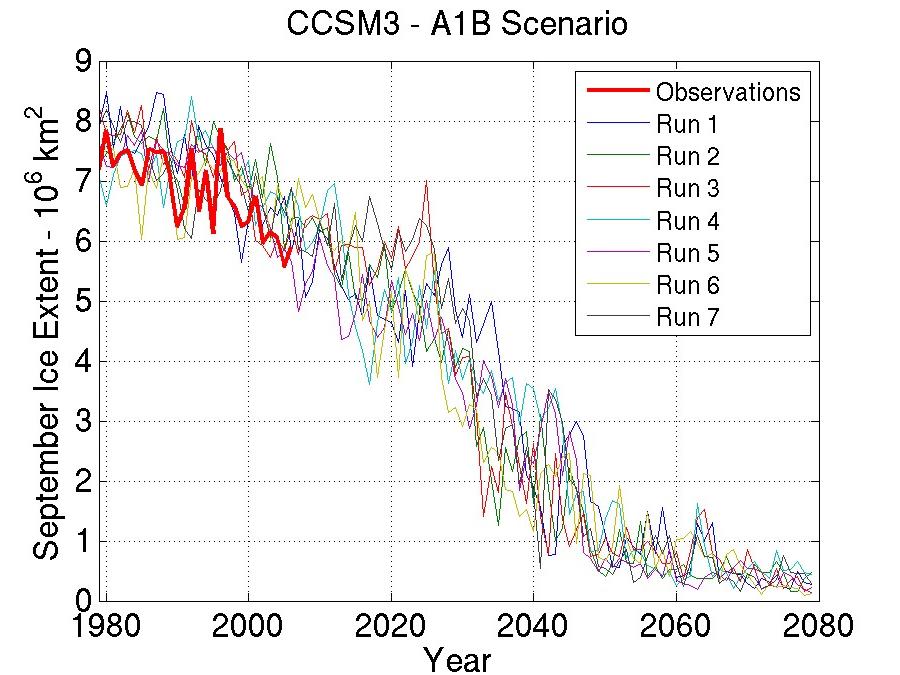 Figure 2: Northern Hemisphere sea ice extent in September for all seven integration of the CCSM3 with observations from satellite era shown in black.

Most common questions asked by journalists

1) How does our model compare with the trend in the observed record?

The trends in the seven ensemble members for 1979-2006 span the trend in the observations: Some members retreat a little faster and some a little slower, as expected from the random natural variability in the runs (see Fig 2). The model also reproduces the mean and variance of the observations with good fidelity.

2) Other scientists are predicting an ice-free Arctic in September by the year 2060-2080, why is this model predicting it 20-40 years sooner?

First consider estimates based on extrapolation from the observational record. I’ve heard these numbers quoted in the media, but I have not seen a reference to a scientific paper that discusses the analysis in any detail. Figures 2 and 3 illustrate the danger of making an estimate of the future from the observational period. The future trend is not linear, the observational record is too short and the ice-free time is too far in the future to trust extrapolation. If one carries out such an exercise anyway, extrapolation from a linear fit to 1979–2006 gives a zero intersect (indicating the first ice-free year in the future) at about 2110 (see Fig 3). If instead one uses just the last decade, the extrapolation gives 2060. Both estimates are questionable, and so instead we turn to climate models. 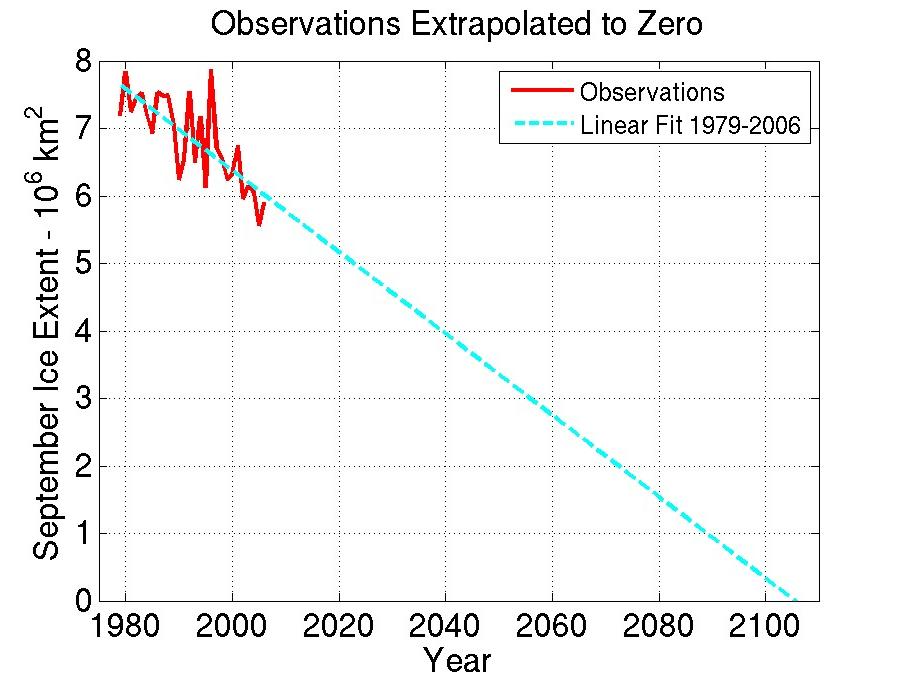 Figure 3: Extrapolating into the future from the observational record.

3) Is sea ice in our model retreating faster than in other models?

Figure 4 shows September ice retreat in 16 models that were archived for the IPCC AR4. The most extreme predictions are from models that have too much or too little sea ice extent compared to observations, so it is important for a model to produce the correct sea ice coverage in the past. Some of the spread is expected from natural variability, but much depends on differing model sensitivity relating to the representation of sea ice, heat transport by the ocean, and cloud cover. It is not possible to identify the most accurate model prediction, although I think it is safe to rule out some of the outliers owing to their poor match to the observations.

About half of the models become ice-free in September during the 21st century. I included one ensemble member from our model, CCSM3, which is in the middle of the pack until about 2020. Our model run retreats faster than most after about 2020, but it isn’t radically different.

There is considerable uncertainty in future model projections, and Figs 2 and 4 illustrate why it would be better not to focus too much on the year 2040, which to our dismay was highly publicized. The more important message from models is that all but a few outliers predict enourmous sea ice retreat this century. At least a few respectable models predict a nearly ice-free Arctic by midcentury, with a retreat that may be punctuated by rapid events. 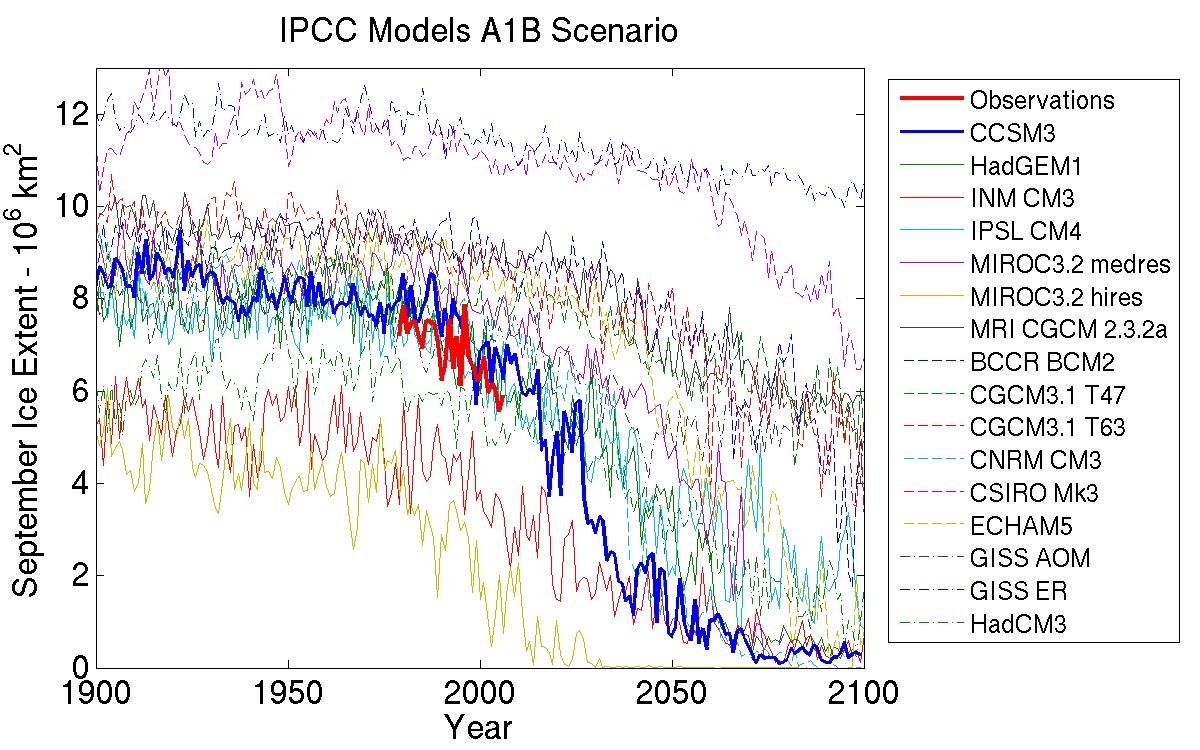 The future emissions scenario discussed here is one that assumes modest increases in emissions. If humans can reduce the rise in emissions compared to this, then sea ice retreat would be slower and rapid events would be rarer, according to the IPCC AR4 models.

5) Have we crossed a tipping point?

I don’t think we have yet. If we fix the greenhouse gas and aerosol levels at year 2000 values and run the model into the 21st century, the sea ice retreats for only another decade or two and then levels off (some of the ensemble members even recover a little bit). So according to our model, the sea ice does not appear to have passed a threshold yet. We have not done an exhaustive study of any years beyond today, so unfortunately we cannot say with certainty that no tipping points exist. The bottom-line: The retreat can be surprisingly rapid even without clear evidence of a tipping point.

I thank Dr. Holland for valuable suggestions to improve this post and providing Fig 1. I thank Ian Eisenman for computing ice extent from the IPCC AR4 models shown in Fig 4. I look forward to reading your comments and questions.

127 Responses to "Arctic Sea Ice decline in the 21st Century"