The recently released IPCC 2007 Fourth Assessment Report Summary for Policymakers reminds us that aerosols remain the least understood component of the climate system. Aerosols are solid or liquid particles suspended in the atmosphere, consisting of (in rough order of abundance): sea salt, mineral dust, inorganic salts such as ammonium sulfate (which has natural as well as anthropogenic sources from e.g. coal burning), and carbonaceous aerosol such as soot, plant emissions, and incompletely combusted fossil fuel. As should be apparent from this list, there are many natural sources of aerosol, but changes have been observed in particular, in the atmospheric loading of carbonaceous aerosol and sulphates, which originate in part from fossil fuel burning. While a relatively minor part of the overall aerosol mass, changes in the anthropogenic portion of aerosols since 1750 have resulted in a globally averaged net radiative forcing of roughly -1.2 W/m2, in comparison to the overall average CO2 forcing of +1.66 W/m2. 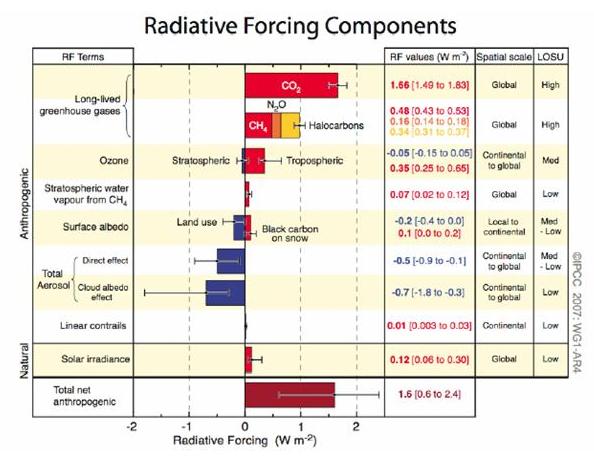 Figure SPM-2, shown here, compares the radiative forcing for greenhouse gases and other climate forcing agents, along with an assessment of the level of scientific understanding (“LOSU”) for each component. In this figure, it is clear that while aerosols contribute the largest negative (cooling) radiative forcing, the level of scientific understanding of their climate influence is “low” to “medium-low”. The aerosol effects are split into two categories: (1) direct effects, meaning the scattering or absorption of radiation by aerosols influencing the net amount of energy reaching the Earth’s surface, and (2) indirect effects, such as the cloud albedo effect, referring to how the presence of aerosol increases cloud reflectivity by providing a larger number of nuclei for cloud droplets, reducing the amount of energy reaching the surface. This is a step up from the last report, where the LOSU for aerosols was very low to low, and no most likely value was assigned at all for the ‘indirect’ part.

This figure also visually hints at why improving our understanding of aerosol’s role in climate is so important: while overall net radiative forcing is positive (warming), aerosols provide the dominant negative (cooling) forcings. Hence, the aerosol currently in our atmosphere is acting to mask some of the greenhouse gas-induced warming. This means that as we get our act together to reduce fossil fuel use to improve air quality and address global warming, we need to be mindful of how changes in emissions will impact aerosol concentrations and composition.

In addition, our deficient understanding of aerosol forcing also hinders our ability to use the modern temperature record to constrain the “climate sensitivity” – the operative parameter in determining exactly how much warming will result from a given increase in CO2 concentration. The determination of climate sensitivity has been discussed in this forum previously here. The sensitivity parameter can be derived by examining historical records of the correlation of CO2 concentration and temperature taking into account other contemporary changes. Aerosols contribute significantly to the uncertainty in climate sensitivity because we cannot model their historical impact on the temperature record with sufficient accuracy, though additional constraints on climate sensitivity such as the last ice age do exist. A better understanding of aerosols then may well facilitate more accurate predictions of future climate responses to changing CO2.

The relative lifetimes of CO2 and aerosol in the atmosphere result in the expectation that reducing fossil fuel use will accelerate warming. A CO2 molecule has a lifetime of about 100 years in the atmosphere, while an aerosol particle has an average life expectancy of only about 10 days. Therefore, if we instantaneously ceased using combustion engines, the (cooling) fossil fuel-related aerosols would be cleaned out of the atmosphere within weeks, while the (warming) CO2 would remain much longer, leaving a net positive forcing from the reduction in emissions for a century or more.

So, what do we need to learn about aerosol to narrow those error bars in Figure SPM-2? To accurately model aerosols’ climate impact, we need to know about the whole lifespan of the aerosols: their diverse sources, aging processes (and how those affect radiative properties), how they mix together and the mechanisms and timescales for its removal from the atmosphere. As the IPCC 2007 4AR will make clear, we’ve come a long way in our understanding of atmospheric aerosol, but there is still plenty of room for improvement.

184 Responses to "Aerosols: The Last Frontier?"