You are here: Home / Climate Science / Beck to the future

Our understanding of the natural carbon cycle has greatly improved since the times of Svante Arrhenius (1859-1927) and Guy Stewart Callendar (1898-1964). We know what the atmospheric background value of CO2 currently is (it passed 380ppm last year, about 100ppm over the pre-industrial level), we know the seasonal/diurnal cycle in different environments, we have been able to put reasonable constraints on terrestrial and marine sources and sinks, and finally we know the impact of fuel combustion both globally and locally in heavily polluted areas.

The most impressive record documenting the human role in atmospheric CO2 concentrations was recently published in the AR4 SPM showing the comparably minor variations of CO2 during the Holocene (as measured in various ice cores) followed by the abrupt increase of greenhouse gases (GHGs) since the start of industrialisation in the 19th century (figure).

It took a lot of long and painful lessons for scientists to come to this level of understanding of the natural carbon cycle and its anthropogenic contributions. Difficulties arose mainly from two problems: First, sampling of air masses and subsequent measuring of CO2 concentrations was in itself a difficult problem. Measuring techniques were based on titration with limewater or baryta (the Pettenkofer process) and needed a significant amount of technical skill and patience for a proper measurement. The regular use of a CO2 standard to permanently check the measurement quality was something of an exception.

Secondly, nearly all early sampling facilities were tested in continental environments often under the sporadic influence of heavily polluted air masses (such as Paris, Parc Montsouris, Copenhagen, Dieppe etc.). How large is the influence of such “CO2 pollution”? A quick tour through my car-traffic-saturated home town, Paris, can give us a good first impression:

All these measurements by David Widory and Marc Javoy (reference below) were snapshot measurements, but they show how CO2 concentrations can vary strongly due to nearby fossil fuel combustion. Even in apparently “natural” environments there are many technical pitfalls to avoid. Strong CO2 fluxes due to the breathing (i.e. photosynthesis and respiration) of the biosphere are producing large diurnal cycles. A sampling site too close to the surface or shielded by a surrounding forest can easily bias the CO2 signal by several dozens of ppm. 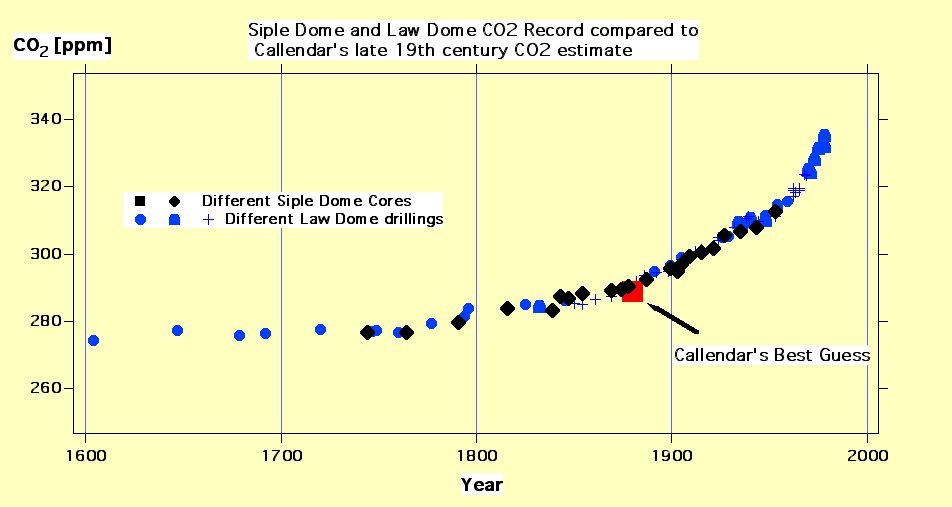 During Callendar’s time the exact numbers and processes involved in regional low-altitude CO2 measurements were not yet precisely known. Nevertheless, he made a careful selection of reliable data depending on the methodology used and, in particular, depending on the wind direction since he correctly assumed that North Atlantic marine air represents much better something like a Northern Hemisphere background value. Callendar published his results first 1938 and finally (in 1958) gave a “best value” of 289ppm for the late 19th century amazingly confirmed by subsequent ice core work (see Figure 1).

Recently an article by E-G. Beck has been wafting through the Internet and has now been ‘published’ by Energy and Environment which challenges all these findings or, more precisely, ignores the last 50 years of carbon cycle research [Curiously, this journal always seems happy to ennoble even the strangest idea with the scientific label: “peer reviewed“]. Beck’s approach is very simple: He decided from the beginning that Keeling and Callendar obviously are ideological fanatics and that finally all chemical measurements in the 19th and early 20th century actually were fine. Great news of course!

So what does the new CO2 “reconstruction” look like? For example, within 15 years CO2 levels rose from about 290ppm (1925) to about 470ppm (1942). Worse, within only 10 years these huge CO2 levels were absorbed again and came back to boring mainstream values of about 300ppm.

The list of arguments against such variability in the carbon cycle is too long even for a post on RC but here are a few of the main ones:

The last question to answer is how on earth Beck’s paper could survive a half-decent review process from anyone who knows any of this history. But this is a question best posed to the Editorial board of Energy and Environment and its Editor, Sonja Boehmer-Christiansen.

58 Responses to "Beck to the future"