The net loss in volume and hence sea level contribution of the Greenland Ice Sheet (GIS) has doubled in recent years from 90 to 220 cubic kilometers/year has been noted recently (Rignot and Kanagaratnam, 2007). The main cause of this increase is the acceleration of several large outlet glaciers. There has also been an alarming increase in the number of photographs of meltwater draining into a moulin somewhere on the GIS, often near Swiss Camp (35 km inland from the calving front). The story goes—warmer temperatures, more surface melting, more meltwater draining through moulins to glacier base, lubricating glacier bed, reducing friction, increasing velocity, and finally raising sea level. Examining this issue two years RealClimate suggested this was likely the correct story. A number of recent results suggest that we need to take another look at this story.

Jakobshavn Glacier, West Greenland, retreated 30 km from 1850-1964, followed by a stationary front for 35 years. Jakobshavn has the highest mass flux of any glacier draining an estimated 6% of the GIS. The glacier terminus region also had a consistent velocity of 19 meters/day (maximum of 26 m in glacier center), from season to season and year to year, the glacier seemed to be in balance, as I noted in a 1989paper. This is the fastest glacier in the world, no steroids needed. After 1997 it began to accelerate and thin rapidly, reaching an average velocity of 34 m/day in the terminus region. The glacier thinned at a rate of up to 15 m/year and retreated 5 km in six years. Jakobshavn has since slowed to near its pre-1997 speed, the terminus retreat is still occurring, but likewise is. 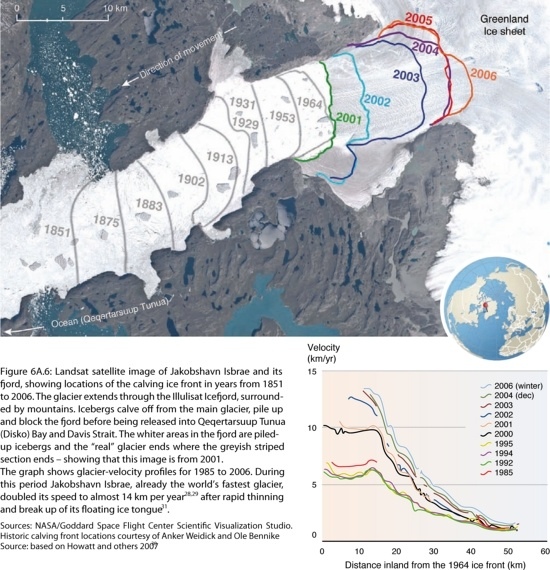 The first mechanism for explaining the change in velocity is the “Zwally effect”, which relies on meltwater reaching the glacier base and reducing the friction through a higher basal water pressure. A moulin is the conduit for the additional meltwater to reach the glacier base. This idea, proposed by Jay Zwally, was observed to be the cause of a brief seasonal acceleration of up to 20 % on the Jakobshavns Glacier in 1998 and 1999 at Swiss Camp (Zwally et al., 2002). The acceleration lasted two-three months and was less than 10% in 1996 and 1997 for example. They offered a conclusion that the “coupling between surface melting and ice-sheet flow provides a mechanism for rapid, large-scale, dynamic responses of ice sheets to climate warming”. The acceleration of the three glaciers had not occurred at the time of this study and they were not concluding or implying that the meltwater increase was the cause of the aforementioned acceleration. However, many others have made this assertion and are investigating (Stearns and Hamilton, 2007). Examination of recent rapid supra-glacial lake drainage documented short term velocity changes due to such events, but they had little significance to the annual flow of the large glaciers outlet glaciers (Das et.al, 2008).

The second mechanism is a “Jakobshavn effect”, coined by Terry Hughes, (1986), where a force small imbalance of forces caused by some perturbation can cause a substantial non-linear response. In this case an imbalance of forces at the calving front propagates up-glacier. Thinning causes the glacier to be more buoyant, even becoming afloat at the calving front, and is responsive to tidal changes. The reduced friction due to greater buoyancy allows for an increase in velocity. This is akin to letting off the emergency brake a bit. The reduced resistive force at the calving front is then propagated up glacier via longitudinal extension in what R. Thomas calls a backforce reduction (Thomas, 2003 and 2004). For ice streaming sections of large outlet glaciers (in Antarctica as well) there is always water at the base of the glacier that helps lubricate the flow. This water is, however, generally from basal processes, not surface melting.

On Jakobshavn the acceleration began at the calving front and spread up-glacier 20 km in 1997 and up to 55 km inland by 2003 (Joughin et al., 2004). On Helheim the thinning and velocity propagated up-glacier from the calving front. Each of the glaciers fronts did respond to tidal variations indicating they had become afloat, detached from their bed (Hamilton et al, 2006). This had been the case at Jakobshavn for the last 50 years, but not for Helheim or Kangerdlussuaq. In each case the major outlet glaciers accelerated by at least 50%, much larger than the impact noted due to summer meltwater increase. On Jakobshavn the acceleration was not restricted to the summer, persisting through the winter when surface meltwater is absent.

“The most plausible sequence of events is that the thinning eventually reached a threshold, ungrounded the glacier tongues and subsequently allowed acceleration, retreat and further thinning. It is reasonable to believe that the 1998 Jakobshavn speed-up, also following a long period of stability, was triggered by the same processes of thinning but occurred earlier and after a shorter period of thinning because the tongue was already afloat.”

Examination of the acceleration of other glaciers such as the Petermann Glacier indicate a much smaller acceleration than that observed on three glaciers we have focused, and indeed it is in the summer and of a magnitude that the Zwally effect could explain (Rignot, 2005). Other large outlet glaciers such as the Rinks and Daugaard-Jensen have been stable since 1960 (Stearns et al, 2005). Many other lesser outlet glaciers have accelerated substantially.

That each of the three glaciers has a reduced velocity in 2006 and 2007 despite some exceptional melt conditions in 2007 further suggests that meltwater is not the dominant driver of the acceleration of the main outlet glaciers. Temporarily, there appears to be a force imbalance at the glacier fronts. This will reduce the annual contribution to rising sea level from glacier dynamic changes. The bad news is that the degree of acceleration that can occur via the Jakobshavn effect is greater in these cases than that from the Zwally effect. The Zwally effect is nonetheless real and also implies a direct sea level impact of greater melt.

The Jakobshavn is of particular importance as it has a bed below sea level for at least 80 km inland from the terminus. In this reach there are no significant pinning points, or abrupt changes in slope or width (Clarke and Echelmeyer, 1996) that would help stabilize the glacier during retreat. It is the only outlet glacier of GIS to lack these, and can then (via backforce reductions) tap into the heart of GIS. We know that surface melting is a slow process for raising sea level. but as Greenland’s major outlet glaciers have recently shown, rapid acceleration can quickly deliver large volume of ice to the ocean. The pace of change is not glacial.