You are here: Home / Climate Science / Aerosols / Of tempests, barren ground and a thousand furlongs of sea

Several studies have shown that hurricane activity is generally reduced during years when there is a thick aerosol haze over the subtropical Atlantic. The haze is comprised mainly of soil particles, stripped by wind erosion from the barren ground over the Sahara and Sahel. These particles are lifted into the atmosphere and carried by the Trade winds as far as the Caribbean and Amazon basin. Plumes of dust streaming off the African coast are easily recognized in satellite imagery, and were even described by Charles Darwin during his voyage on the Beagle. 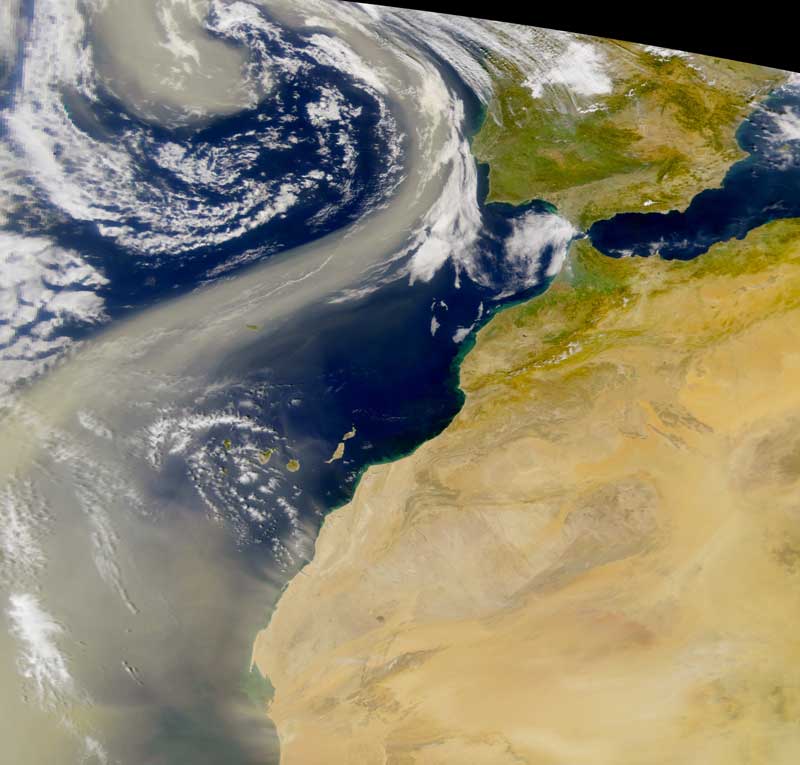 The amount of dust crossing the Atlantic has been measured at Barbados since the mid 1960s (aptly by Prospero and colleagues). These measurements show a threefold increase in dust between the original part of the record and the mid 1980s at the peak of the Sahel drought, when the region was unusually vulnerable to wind erosion. African dust crosses the tropical Atlantic within the Saharan Air Layer (SAL), an elevated duct of air between about 2 and 5 km in altitude. Because of its continental origin, this air is not only dusty but extremely dry. 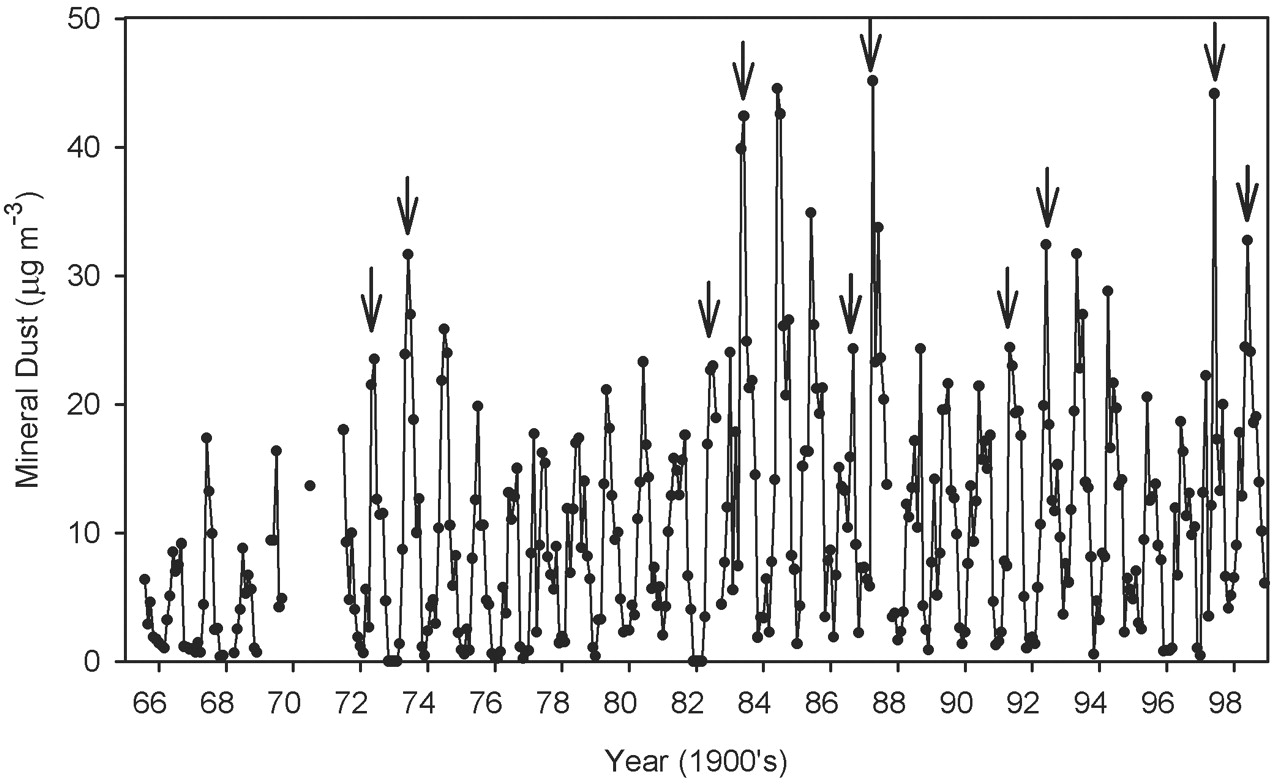 There is an observed anti-correlation between dustiness and tropical cyclone days in the Atlantic (Evan et al, 2006). This anti-correlation might indicate the a direct influence of dust on hurricanes, or a connection between the dry air the dust resides in and hurricanes, or might even be related to a much larger scale pattern which controls both hurricanes and dustiness. If there is a connection, one hypothesis is that entrainment of dry SAL air rapidly strangles a developing cyclone because of the low humidity that accompanies the dusty air, while the dust itself has no direct effect. An alternative hypothesis is that the reduction in sunlight beneath the dust layer cools the ocean surface, whose temperature is a well-known predictor of hurricane activity (at least at the basin scale). Thus it is plausible that decadal variations in dustiness could contribute to decadal variations in hurricane activity, but how big might such an effect be?

A recent article in Science by Evan et al. (2009) is one of the few attempts to quantify the contribution of both dust and volcanic aerosols to the observed warming within the tropical Atlantic. The authors infer the amount of total aerosol using the Advanced Very High-Resolution Radiometer (AVHRR) satellite instrument and screen for locations where dust is present (they note that other aerosols might be mixed with the dust, but neglect this overlap). They also assume that dust has no effect where there are clouds. However, where the SAL extends over low marine clouds, the dust (since it is darker than cloud) might have an opposing effect to that seen in clear sky regions, although this is hard to quantify. They then calculate the contribution by dust and volcanic aerosols to observed changes in sea surface temperature (SST) during the satellite record between 1982 and 2007. During this period, the aerosol amount varied with dust export from Africa, but also from major eruptions by two volcanoes (El Chichon in 1982 and Pinatubo in 1991), each of which left a reflective layer of sulfate droplets in the lower stratosphere for a couple of years.

Evan et al. calculate that between 1982 and 2007 the ocean surface warmed by 0.25°C/decade in the main region of Atlantic hurricane genesis (15-­65°W and 0­-30°N). For comparison, they calculate a warming trend of 0.18°C/decade due to a reduction of dust and volcanic aerosols. That decreasing aerosols account for two-thirds of the observed warming might suggest that other factors like the increase in greenhouse gas concentrations (combined with anthropogenic aerosol changes) made a relatively modest net contribution to the warming (and by implication to observed trends in hurricane activity). For the natural aerosols, they calculate that stratospheric aerosols made roughly twice the contribution of dust over this period.

So how did they do this calculation? Firstly, they use a relatively simple model to relate SST to the reduction in net radiation into the ocean surface, prior to any climatic response. This forcing is calculated using the total aerosol amount inferred from the AVHRR data. Variations in SST due to variations in heat transport by ocean currents or diffusion into the thermocline are neglected while contributions by changes in evaporation, turbulent transfer, and surface radiation are estimated as being proportional to the anomalous air-sea temperature difference. Cooling of the ocean by aerosols must therefore be offset by a reduction in heat lost from the ocean to the atmosphere.

They note a key simplification is their neglect of any change to the surface air temperature when calculating anomalous air-sea temperature difference. This would require an atmospheric model along with a consideration of aerosol forcing at the top of the atmosphere (TOA). There is a strong relationship between surface air temperature and TOA forcing (at least at large spatial scales). As a consequence, the ocean-atmosphere flux depends upon not only forcing at the surface but the forcing at the TOA. By neglecting the effect of the changes in surface air temperature upon SST, Evan et al. may be underestimating the impact of the aerosols on their calculated trend. This is especially important for volcanic aerosols, whose TOA forcing is large and comparable to the surface forcing, as opposed to absorbing aerosols like dust where the surface forcing is larger than at TOA. However, balancing this effect is the neglect of heat diffusion into the thermocline which would reduce the ocean cooling. It is not a priori obvious which effect is more important, especially since the atmosphere can balance the forcing by adjusting lateral heat transport, which would also influence the anomalous surface air temperature.

Another way to test the importance of atmospheric changes would be to calculate both the TOA and surface forcing using the satellite measurements, and then impose this transient forcing in a general circulation model that calculates both the atmosphere and ocean response. That too would have problems, given that the models are not perfect, but it would be a useful check on the order of magnitude of the inferred effects. Indeed, assessments of the causes of tropical Atlantic trends using the IPCC AR4 models (Santer et al, 2006) come up with a much larger component due to anthropogenic effects, though those models did not include dust forcing changes.

Using their methodology, Evan et al. find that a decline in total aerosols contributed around two-thirds of the observed warming in NH tropical Atlantic SST between 1982 and 2007. Most of this is due to the two major volcanic eruptions (El Chichon and Pinatubo) that cooled the ocean early on in this period (and so lead to a warming once they were no longer present). However, the attributed aerosol trend would have been smaller had the satellite record extended a decade earlier. The estimated contribution of dust changes to the observed trend is small, roughly one-quarter of the total trend.

Whatever its impact upon SST, dust might impact other factors contributing to cyclone intensity (Emanuel, 1995), in particular, the reduction of the air-sea heat flux and temperatures in the upper troposphere. Unfortunately, global models don’t quite have the resolution to explicitly calculate all these effects.

Ultimately, the effect of dust upon hurricanes is important because, like ocean temperatures, African dust export is expected to change during the 21st century in response to global warming and changes in African rainfall. One study shows that dust production is expected to decrease (Mahowald and Luo, 2003), though given the diversity of Sahel rainfall projections and the preliminary state of vegetation models, this is not necessarily going to be a universal response.

The calculation by Evan et al. is an interesting first step to quantifying the effect of dust changes on SST, but there plenty of issues left to investigate.

Footnote: For some presumably poetic reason, the Bard neglected to note that the Main Development Region is more like 25,000 furlongs across and the Sahara is about 2 billion acres.

69 Responses to "Of tempests, barren ground and a thousand furlongs of sea"