You are here: Home / Climate Science / Arctic and Antarctic / Is Pine Island Glacier the Weak Underbelly of the West Antarctic Ice Sheet? 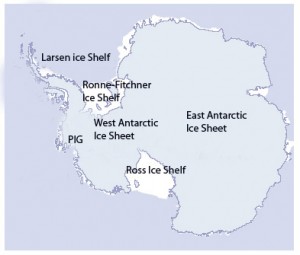 It is popularly understood that glaciologists consider West Antarctica the biggest source of uncertainty in sea level projections. The base of the 3000-m thick West Antarctic Ice Sheet (WAIS) – unlike the much larger East Antarctic Ice Sheet – lies below sea level, and it has been recognized for a long time that this means it has the potential to change very rapidly. Most of the grounded West Antarctic ice sheet drains into the floating Ross and Ronne-Filchner ice shelves, but a significant fraction also drains into the much smaller Pine Island Glacier. Glaciologists are paying very close attention to Pine Island Glacier (“PIG” on map, right) and nearby Thwaites Glacier. In the following guest post, Mauri Pelto explains why.

In science there are instances when a specific mechanism is understood and a hypothesis posed based on an understanding of the processes involved, prior to the initiation or observation of the those processes. An excellent example is the determination by Molina and Rowland (1974) that CFC’s will lead to losses in stratospheric ozone. The full truth of their understanding of the process was not revealed until the Antarctic ozone hole was reported in 1985 by Farman et al.

A different example, from the same time period, was the 1978 publication by the late John Mercer, Ohio State U., who argued that a major deglaciation of the West Antarctic Ice Sheet (WAIS) may be in progress within 50 years. This conclusion was based on the fact that the WAIS margin was ringed with stabilizing ice shelves, and that much of the ice sheet is grounded below sea level. The loss of ice shelves — Mercer proposed — would allow the ice sheet to thin, grounding lines to retreat and the ice sheet to disintegrate via calving. This is a much faster means of losing mass than melting in place. Mercer further commented that the loss of ice shelves on the Antarctic Peninsula, as has since been observed, would be an indicator that this process of ice sheet loss due to global warming was underway.

Mercer’s ideas led Terry Hughes (1981) (my doctoral advisor at U. of Maine) to propose that the WAIS had a “weak underbelly” in Pine Island Bay. This bay in the Amundsen Sea is where the Pine Island Glacier (PIG) and Thwaites Glacier reach the sea. These are the only two significant outlet glaciers draining the north side of the WAIS. Together they drain 20% of the WAIS. Hughes called this area the “weak underbelly” because these glaciers lack the really huge ice shelves Ross Ice Shelf and the Ronne-Filchner Ice Shelf in which most other large WAIS outlet glaciers terminate. Both glaciers have a relatively rapid flow from the WAIS interior to the calving margin. Further the low surface slopes and smooth flow patterns of PIG suggested to Hughes that there was no indication of a landward rise in the elevation of the glacier bed; such a rise would help stabilize the glacier. Without a rise in the bed, glacier thinning and retreat could result in continual grounding line retreat. The grounding line is where the bottom of the glacier comes in contact with the ground below the ice sheet, in this case the sea bottom. The grounding line is an anchoring point for the outlet glaciers. The length of the glacier that is grounded is both slowed and stabilized by resulting basal friction. Beyond the grounding line toward the margin, the floating ice shelf is susceptible to rapid calving retreat and as the grounding line retreats, so would the calving front. Note in the image below that the situation is even less stable than Hughes speculated. The current grounding line is at a higher elevation than the bed of the glacier for the next 200 km inland of this grounding line. (Note, inland is to the left in the figure, below.) The deeper the basin, the thicker the ice must be to maintain grounding. This makes it tough to slow grounding line retreat once it begins in a deepening basin.

The weak underbelly idea was forgotten for some time. While I was attending a conference on rapid glacier flow in Vancouver BC in 1986, data were presented that showed no acceleration of Pine Island Glacier. This was further noted for the entire 1970’s to early 1990’s period by Lucchita and others (1995).

Then, in 1998, Rignot (1998) used satellite imagery to identify that the grounding line of Pine Island Glacier had retreated 5 km from 1992 to 1996. In the same year, Wingham and others (1998) observed a 10 cm per year thinning in the drainage basins for Thwaites and PIG during the 1990’s. Shepherd and others (2001) noted thinning in the fast flow areas of the glacier of 1.6 m/year between 1992 and 1999. This led them to conclude that the observed inland thinning and acceleration of PIG was a response to enhanced glacier bed lubrication. Not from surface melting of course as there is next to none on this glacier. Rignot and others (2002) noted that the glacier had accelerated 18% over a 150 km long section of the glacier in the fast flow area between 1992 and 2000. Change was afoot: after 50 years of apparent stability, the glacier calving front was retreating, and the grounding line was retreating indicating reduced bedrock anchoring. The reduction in basal friction would then lead to faster flow and more thinning. Was this just a short-term increase? 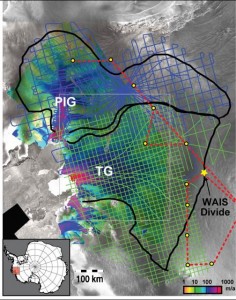 Scott and others (2009) pointed out that the greater thinning toward the grounding line and terminus increased the surface slope and the gravitational driving stress, further promoting acceleration. Then Wingham and others (2009) reported that the 5400 km2 central trunk of the glacier had experienced a quadrupling in the average rate of volume loss quadrupled from 2.6 km3 a year in 1995 to 10.1 km3 a year in 2006. PIG had an annual volume flux at the front of 28 km3 a year, so this increase is a marked change. Their observations were that the region of lightly grounded ice at the glacier terminus is extending upstream, and the changes inland are consistent with the effects of a prolonged disturbance to the ice flow, such as the effects of ocean-driven melting. Further examination of the bed topography by Vaughan and others (2006) indicates that most of the bed of the drainage basin of PIG is more than 500 meters below sea level, and there is a particularly deep basin in the eastern section of the upper basin. The observed acceleration, retreat of the grounding line, thinning of the lower section of the glacier and the observed elevation of the basal topography provide no indication that this is not a weak underbelly of WAIS.

The evidence does indicate that one of the basic underlying principles, proposed by Mercer and Hughes, of what can stabilize or destabilize WAIS was right on the money. The evidence reviewed does not fully confirm the weak underbelly hypothesis, but it provides enough evidence that we had best monitor the situation and expand our attempts to understand it. That is just what the glaciological and scientific community are doing. A number of projects from the British Antarctic Survey, NASA and NSF will continue to expand the research in the area. In January 2008 Robert Bindschadler (NASA) landed on the floating ice shelf of PIG. They found the situation hazardous for plane landing but did leave behind several instruments. NSF has decided to fund establishment of a helicopter camp to safely study the ice-ocean interaction during the 2010-11 summer field season in Antarctica. In 2009 a team of British and American scientists deployed an autonomous robot submarine on six missions beneath the PIG ice shelf using sonar scanners to map the seabed and the ice shelf bottom. This fall NASA’s Operation Ice Bridge has focused much of its energy on the Pine Island Glacier. Seelye Martin of the University of Washington notes that “Pine Island Glacier is a major focus for our mission. We have four flights planned for this glacier. One of our hopes with these flights is to understand the detailed topography under the floating ice tongue. That topography controls the rate of melting there.” 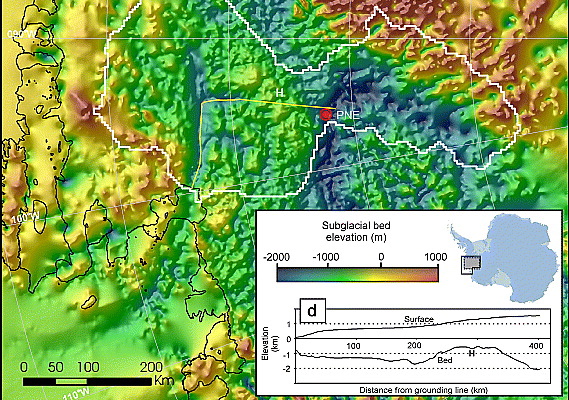 77 Responses to "Is Pine Island Glacier the Weak Underbelly of the West Antarctic Ice Sheet?"