You are here: Home / Climate Science / The IPCC is not infallible (shock!)
Translations: (

Like all human endeavours, the IPCC is not perfect. Despite the enormous efforts devoted to producing its reports with the multiple levels of peer review, some errors will sneak through. Most of these will be minor and inconsequential, but sometimes they might be more substantive. As many people are aware (and as John Nieslen-Gammon outlined in a post last month and Rick Piltz goes over today), there is a statement in the second volume of the IPCC (WG2), concerning the rate at which Himalayan glaciers are receding that is not correct and not properly referenced.

The statement, in a chapter on climate impacts in Asia, was that the likelihood of the Himalayan glaciers “disappearing by the year 2035” was “very high” if the Earth keeps warming at the current rate (WG 2, Ch. 10, p493), and was referenced to a World Wildlife Fund 2005 report. Examining the drafts and comments (available here), indicates that the statement was barely commented in the reviews, and that the WWF (2005) reference seems to have been a last minute addition (it does not appear in the First- or Second- Order Drafts). This claim did not make it into the summary for policy makers, nor the overall synthesis report, and so cannot be described as a ‘central claim’ of the IPCC. However, the statement has had some press attention since the report particularly in the Indian press, at least according to Google News, even though it was not familiar to us before last month.

It is therefore obvious that this error should be corrected (via some kind of corrigendum to the WG2 report perhaps), but it is important to realise that this doesn’t mean that Himalayan glaciers are doing just fine. They aren’t, and there may be serious consequences for water resources as the retreat continues. See also this review paper (Ren et al, 2006) on a subset of these glaciers. 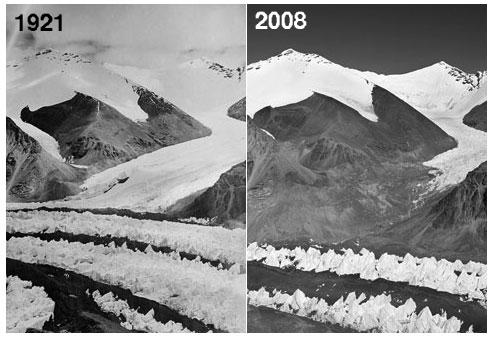 More generally, peer-review works to make the IPCC reports credible because many different eyes with different perspectives and knowledge look over the same text. This tends to make the resulting product reflect more than just the opinion of a single author. In this case, it appears that not enough people with relevant experience saw this text, or if they saw it, did not comment publicly. This might be related to the fact that this text was in the Working Group 2 report on impacts, which does not get the same amount of attention from the physical science community than does the higher profile WG 1 report (which is what people associated with RC generally look at). In WG1, the statements about continued glacier retreat are much more general and the rules on citation of non-peer reviewed literature was much more closely adhered to. However, in general, the science of climate impacts is less clear than the physical basis for climate change, and the literature is thinner, so there is necessarily more ambiguity in WG 2 statements.

In future reports (and the organisation for AR5 in 2013 is now underway), extra efforts will be needed to make sure that the links between WG1 and the other two reports are stronger, and that the physical science community should be encouraged to be more active in the other groups.

In summary, the measure of an organisation is not determined by the mere existence of errors, but in how it deals with them when they crop up. The current discussion about Himalayan glaciers is therefore a good opportunity for the IPCC to further improve their procedures and think more about what the IPCC should be doing in the times between the main reports.

Update: This backgrounder presented by Kargel et al AGU this December is the best summary of the current state of the Himalayas and the various sources of misinformation that are floating around. It covers this issue, the Raina report and the recent Lau et al paper.