There is a letter in Nature Geoscience this month by Manning et al (sub. reqd.) “Misrepresentation of the IPCC CO2 emission scenarios” discussing some recent statements about the growth rates of CO2 emissions compared to the IPCC scenarios that informed the climate modeling in the last IPCC report. In it they refer to results published by us and colleagues in a couple of recent papers (Raupach et al. 2007; Le Quéré et al. 2009), and to statements made by others on the basis of our results (Ganguly et al. 2009; Anderson et al. 2008; Reichstein 2010). Specifically, Manning et al object to the claim that “current CO2 emissions from fossil fuel burning were higher than the values used in climate projections by the IPCC”.

We agree with the Manning et al’s main point, and appreciate the chance to provide some clarification on the graph in question and subsequent use of our result. To be specific, recent emissions were not higher than each and every one of the climate projections by the IPCC, as has been claimed by some other studies citing our work, although they were near the top end of the range.

So what is the claim of ‘misrepresentation’ based on?

The IPCC Special Report on Emissions Scenarios (SRES) published in 2000, provided forty scenarios representing plausible futures depicted by common storylines. The IPCC selected six of the forty original SRES scenarios as “illustrative” of the storylines to be used for projections of climate change. In our papers however, we compared recent CO2 emissions with the averages across models depicting common storylines.

Some other studies cited our results assuming that we compared recent CO2 emissions with the illustrative SRES scenarios (unfortunately our figures were not sufficiently clear). The real emissions were above all the scenario averages, while the emissions in one of the six illustrative scenarios was higher than observed. The misinterpretation of our results contributed to claims that IPCC’s global warming projections might be underestimated (Ganguly et al. 2009). Our results do not support such claims.

Why chose scenario averages instead of the illustrative scenarios?

Over the 2000-2010 time period, the trends in CO2 emissions in the illustrative scenarios are dominated by individual model biases. Model averaging is a common way to minimise biases found in individual models and to extract the more robust tendencies and common expectations from a group of equally valid model results. For instance, the A1 storyline depicts a common future based on fossil intensive (A1FI), non-fossil energy sources (A1T), or a balance across all sources (A1B). Logically, one would expect that the fossil intensive scenario A1FI would emit more CO2 than the non-fossil scenario A1T, with the balanced scenario A1B in the middle. This is what comes out of the model averages. In the illustrative scenarios however, the balanced scenario A1B has more CO2 emissions than the other illustrative scenarios during 2000-2010, which reflects more an individual model bias over this time period than a common tendency.

Manning et al. point out that model averages have problems of self-consistency and should not be used. Whereas there are indeed problems with model averages, they have to be weighted against problems of individual model biases and the choice of comparison depends on the issue addressed. As we understand, the problems of self-consistency in this context refer to two things. First, that gases from different models should not be mixed because modelling groups make different choices, for example regarding the future use of land for agriculture. Those choices lead to specific combinations of gases which are lost in the averaging. Second that if models are averaged, it is more difficult to relate back the tendencies to the underlying drivers of the emissions. Both these issues are problematic when the SRES scenarios are used for climate projections, and thus the IPCC rightly selected illustrative scenarios for this purpose. However the issues of self-consistency were less important for our analysis which focused on CO2 only and used other available data to interpret the observed trends. We felt that on balance, the issue of self-consistency seemed less important than issues of biases in individual models in the context of our analysis.

How did CO2 emissions changed in the recent past?

The figure below shows how the CO2 emissions in 2008 (the last year when emissions are available) compared to the 40 original SRES emission scenarios, including both the scenario averages which we used, and the illustrative Scenarios used by the modeling groups to project climate change as reported in the IPCC report. It is clear from this comparison that recent emissions were near the top end of the SRES emission scenarios, whether the comparison is made with the original forty scenarios, with the six illustrative scenarios, or with scenario averages. 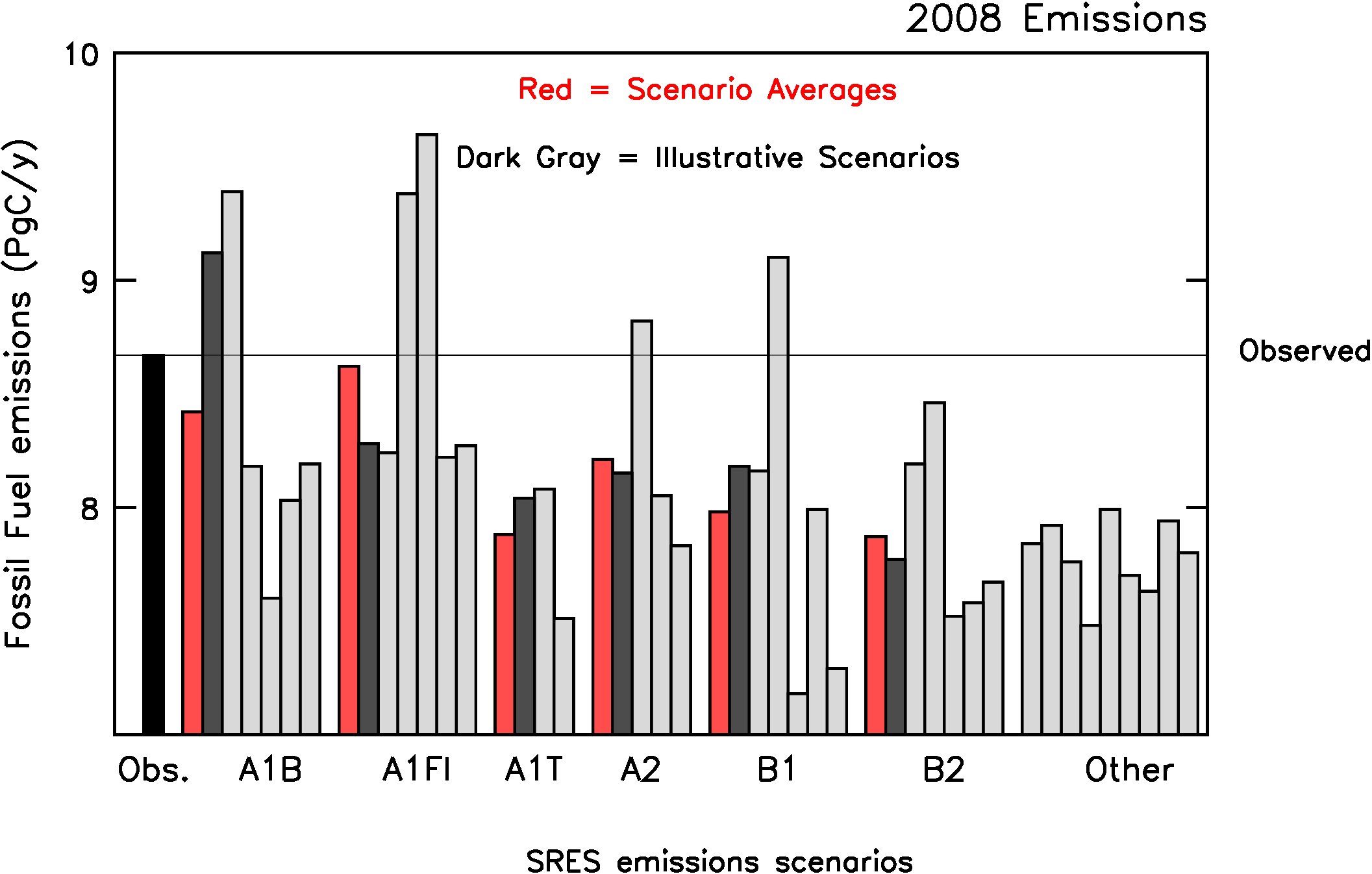 CO2 emissions from fossil fuel burning for 2008 in PgC/y. Data are from the Carbon Dioxide Information Analysis Center. Emissions for each of the 40 emission scenarios published by IPCC’s Special Report on Emissions Scenarios are shown. The Scenario names (A1B, A1FI, A1T, A2, B1, B2) correspond to common storylines. The observed emissions are shown in black (uncertainty of about ±6%). Red bars are averages by families of Scenarios. Dark gray bars are the illustrative scenarios used by the IPCC to project climate. See here for a comparison to 2009 projections as in Le Quéré et al. (2009), using the Gross Domestic Product updated by the International Monetary Fund in 04/2010.

The picture is the same if we analyse how fast emissions grew in the past decade. The recent growth in CO2 emissions was 3% per year on average during 2000-2009. This rate includes projected emissions during the 2009 financial crisis, and exceeds the growth estimated by 35 of the 40 SRES scenarios (34 if the trend is computed with end points instead of a linear fit).

Manning and colleagues rightly highlight that the emission scenarios were designed to cover long term trends rather than short term fluctuations. As the CO2 emission scenarios are the primary drivers of climate change in model projections, it is important to monitor deviations from the observed trends, and in particular to identify if the underlying drivers of the deviations have any foreseeable long-term implications. In Raupach et al. (2007) we identified, based on 2000-2005 data, that the recent trends were largely caused by increased use of coal in China and other developing economies, uncompensated by additional improvements in energy efficiency elsewhere. This situation persisted at least until 2008 (Le Quéré et al. 2009). An expansion of the world’s coal-based industry locks energy production in CO2-intensive infrastructure for decades, and thus it has long-term implications for future global CO2 emissions and climate, and in particular for prospects of reaching the most ambitious climate targets.