You are here: Home / Climate Science / What if the Sun went into a new Grand Minimum?

During a meeting of the Solar Physics Division of the American Astronomical Society, solar physicists have just announced a prediction that the Sun might enter an extended period of low activity (a ‘grand minimum’) similar to the Maunder Minimum in the 17th century. In this post I will explore the background of this announcement and discuss implications for Earth’s climate.

It has been known for a long time that solar activity shows a very regular pattern. Every 11 years the Sun is particularly active, and numerous dark sunspots are visible on its surface. These maxima of solar activity are separated by times of low activity when only few (if any) sunspots appear.

Figure 1: The Sun in visible light during an activity maximum (left) and during the last (and rather extraordinary) 11-year minimum during which it appeared spotless most of the time. Source: NASA Earth Observatory/SOHO.

One could think that the Sun emits less light during a solar maximum because of the many dark spots. In fact it is the other way round, since active regions around the sunspots emit more radiation than is “lost” in the cooler sunspot areas. This effect can be best seen in ultraviolet images of the Sun.

Figure 2: The Sun in ultraviolet light during a maximum (left) and a minimum (right). Source: NASA Earth Observatory/SOHO.

An analysis of historic sunspot observations shows that the 11-year solar activity cycle was interrupted during the late 17th century.
This period of time, during which the Sun appeared without sunspots most of the time, was called the Maunder Minimum by Jack Eddy in his famous Science paper. (Alliteratively named after Edward Maunder, although it was actually first discovered by Gustav Spörer.)

The Maunder Minimum falls within the climatically cooler period of the “Little Ice Age”, during which temperatures were particularly low over continents in the Northern hemisphere (especially in winter). It has long been suspected that the low solar activity during the Maunder Minimum was one of the causes of the Little Ice Age, although other factors like a small drop in greenhouse gas concentrations around 1600 and strong volcanic eruptions during that time likely played a role as well.

Solar physicists do not yet understand how an extended solar-activity low like the Maunder Minimum arises. Yet there is recent observational evidence for an unusual behavior of the Sun during the current cycle 24, including a missing zonal wind flow within the Sun, decreasing magnetic field strength of sunspots and lower activity around the poles of the Sun. These observations prompted Frank Hill and colleagues to suggest that the Sun might enter a new Maunder-like minimum after the current 11-year cycle ends (i.e. after 2020 or so).

It remains to be seen whether this prognosis turns out to be true (there have been some doubts expressed), but since grand minima of solar activity did occur in the past, it is certainly interesting to explore what effects such a minimum might have on 21st century climate if it did occur. This is precisely the question Stefan Rahmstorf and I investigated in a study published last year (see also our press release. (Earlier estimates for the size of this effect can be found here and here.) In our study we find that a new Maunder Minimum would lead to a cooling of 0.3°C in the year 2100 at most – relative to an expected anthropogenic warming of around 4°C. (The amount of warming in the 21st century depends on assumptions about future emissions, of course). 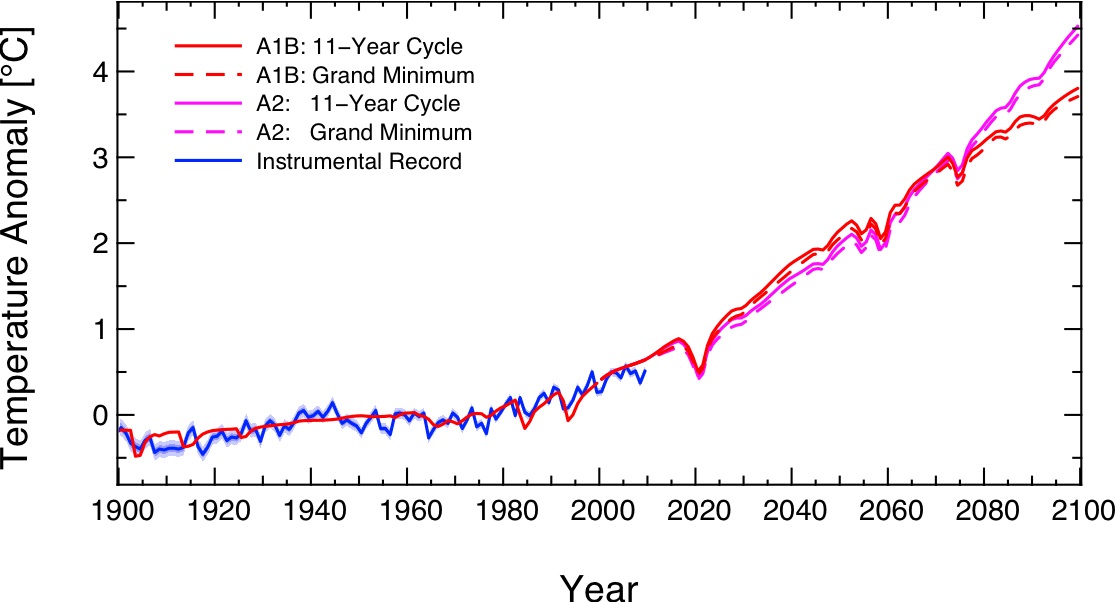 Figure 4: Rise of global temperature (relative to 1961-1990) until the year 2100 for two different emission scenarios (A1B, red, and A2, magenta). The dashed lines show the slightly reduced warming in case a Maunder-like solar minimum should occur during the 21st century. Source: PIK.

According to these results, a 21st-century Maunder Minimum would only slightly diminish future warming. Moreover, it would be only a temporary effect since all known grand solar minima have only lasted for a few decades. Critics of this result might argue that the solar forcing in these experiments is only based on the estimated change in total irradiance, which might be an underestimate, or that does not include potential indirect amplifying effects (via an ozone response to UV changes, or galactic cosmic rays affecting clouds). However, our model reproduces the historic Maunder minimum with these estimates of solar irradiance. Furthermore, even if one multiplied the solar effects by a huge factor of 5 (which is unrealistic), no absolute cooling would take place (the temperatures would be temporarily cooler than the base scenario, but the trends would still be warming).

It is clear that if a grand minimum were to happen it would be a tremendously exciting opportunity for solar physicists, however it is unlikely to be very exciting for anyone else.

Update 23 June: Here is a nice tongue-in-cheek video on the media response to this story.

65 Responses to "What if the Sun went into a new Grand Minimum?"