The curious mismapping of Greenland’s ice sheet cover by the venerable Times Atlas recently has excited a lot of outraged commentary. But few people noted that this follows an old tradition of speculative cartography of the polar regions. ‘Modern’ mapmakers as early as the 16th century combined real facts and scientific knowledge with fundamental misinterpretations of that knowledge to create speculative mappings of the world’s unknown shores – and nowhere was this more prevalent than at the poles.

Early cartographers had a particularly difficult time mapping the Polar Regions. Factually, they based their maps on reports from mariners who dared sail the dangerous waters. This was supplemented by information from earlier maps, speculations based upon their personal theories of geography, religious beliefs, and the fiscal and political ambitions of their patrons. 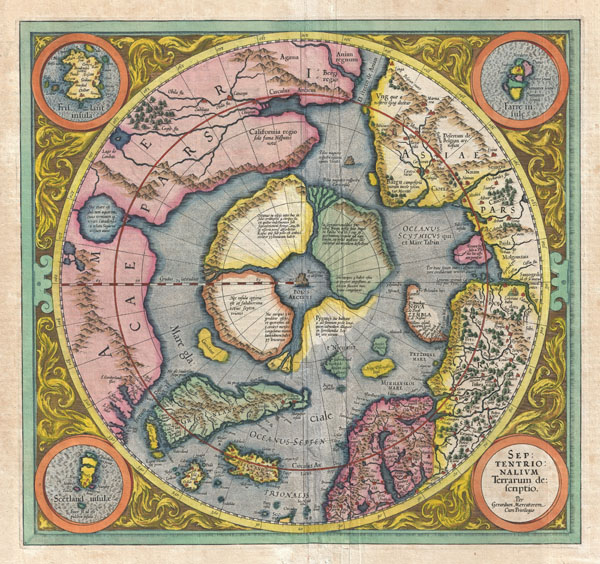 The earliest specific map of the North Pole is Gerard Mercator’s 1595 Septentrionalium Terrarum Descriptio (‘Northern Lands Described’, shown here is the 1606 edition). Mercator interprets a lost work known as the Inventio Fortunata (“The Fortunate Discovery”), which, though we don’t know for certain, supposedly refers to early journeys to Iceland and the Faeroes in the 14th century. Complementing and interpreting the Inventio, Mercator added real geographic knowledge collected by explorers Martin Frobisher (1535-1594) and John Davis (1550-1605) (amongst others). Mercator used the Inventio description of lands and peoples, Frobisher and Davis’s reports on currents, ice extent, and other elements, to compose this masterpiece of cartographic speculation.

At the North Pole Mercator placed a great mountain, the Rupes Nigra (“Black Rock”) around which flows a mighty whirlpool (hence the strong currents recorded by Davis and Frobisher). From here four powerful rivers flow inward dividing a supposed Arctic continent into four distinct lands. Mercator referenced the Inventio to populate these lands with pygmies, Amazons, and other anomalies. Between Asia and America Mercator added another great sea mountain to which he ascribes magnetic properties. This mountain evolved from a pet theory devised by Mercator to explain magnetic variation. It is also noteworthy that the seas all around the poles are open and navigable – it is very likely Mercator had in mind the interests of royal patrons eager for a Northwest or Northeast Passage.

Two hundred and fifty years later, in 1763, the French geographer Phillipe Buache (1700-1773), issued another wonderful attempt to address the problematic Polar Regions. Buache drew this map to expound upon his own theory of water basins wherein he hypothesized that the Antarctic contained two distinct land masses separated by a frozen sea. From the frequency of icebergs seen by early explorers such as Halley and Bouvet, Buache presumed that there must be a semi-frozen sea at the South Pole. This sea, which he argued (correctly) could only be fed by mountains in the surrounding polar lands, disgorged ice into the southern seas. He thus maps “Land yet undiscovered” and “Frozen Sea as Supposed”, “Supposed Chain of Mountains” as well as other speculations. In order to conform not only to his own theories but to accepted mappings of this region by venerable cartographers of the 16th and 17th centuries such as Kaerius and Orteilus, Buache also joins New Zealand to the Antarctic mainland and adds an expansive reservoir he names “Siberia”. Buache was highly influential in his time and aspects of his geographical speculation found their way into numerous maps of the period.

Maps such as these abound in early cartography and most, no matter how misguided, are genuine attempts to rectify the known and unknown. Some, like the maps above and the more contemporary Times Atlas’ map of Greenland, are derived from real scientific knowledge, but exhibit either a misunderstanding of geography or an erroneous hypothesis. These often lead to fictitious interpretations of factual data. Such errors do have ramifications. In the early days of polar exploration such maps often inspired to ill-fated nautical expeditions in search of pygmies, polar seas, and new lands. In modern times, such speculative mappings, both early and contemporary, have been used by some to disprove global warming, advocate for the continent of Atlantis, and prove that space aliens mapped the earth in antiquity.

It should therefore probably be always borne in mind that cartography has always been a blend of art and science – which of course is one of the reasons why it so fascinates us.