You are here: Home / Climate Science / Much ado about methane

Methane is a powerful greenhouse gas, but it also has an awesome power to really get people worked up, compared to other equally frightening pieces of the climate story.

What methane are we talking about?

The largest methane pools that people are talking about are in sediments of the ocean, frozen into hydrate or clathrate deposits (Archer, 2007). The total amount of methane as ocean hydrates is poorly constrained but could rival the rest of the fossil fuels combined. Most of this is unattractive to extract for fuel, and mostly so deep in the sediment column that it would take thousands of years for anthropogenic warming to reach them. The Arctic is special in that the water column is colder than the global average, and so hydrate can be found as shallow as 200 meters water depth.

On land, there is lots of methane in the thawing Arctic, exploding lakes and what not. This methane is probably produced by decomposition of thawing organic matter. Methane could only freeze into hydrate at depths below a few hundred meters in the soil, and then only at “lithostatic pressure” rather than “hydrostatic”, meaning that the hydrate would have to be sealed from the atmosphere by some impermeable layer. The great gas reservoirs in Siberia are thought to be in part frozen, but evidence for hydrate within the permafrost soils is pretty thin (Dallimore and Collett,1995)

Is methane escaping due to global warming?

There have been observations of bubbles emanating from the sea floor in the Arctic (Shakhova, 2010; Shakhova et al., 2005) and off Norway (Westbrook, 2009). The Norwegian bubble plume coincides with the edge of the hydrate stability zone, where a bit of warming could push the surface sediments from stable to unstable. A model of the hydrates (Reagan, 2009) produces a bubble plume similar to what’s observed, in response to the observed rate of ocean water warming over the past 30 years, but with this warming rate extrapolated further back in time over the past 100 years. The response time of their model is several centuries, so pre-loading the early warming like they did makes it difficult to even guess how much of the response they model could be attributed to human-induced climate change, even if we knew how much of the last 30 years of ocean warming in that location came from human activity.

Lakes provide an escape path for the methane by creating “thaw bulbs” in the underlying soil, and lakes are everywhere appearing and disappearing in the Arctic as the permafrost melts. (Whether you get CO2 or a mixture of CO2 plus methane depends critically on water, so lakes are important for that reason also.)

So far there hasn’t been strong evidence presented for detection enhanced methane fluxes due to anthropogenic warming yet. Yet it is certainly believable for the coming century however, which brings us to the next question:

What effect would a methane release have on climate?

The climate impact of releasing methane depends on whether it is released all at once, faster than its lifetime in the atmosphere (about a decade) or in an ongoing, sustained release that lasts for longer than that. 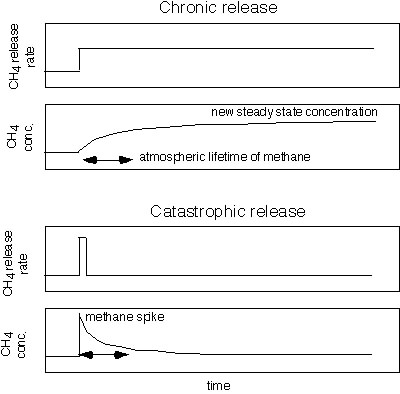 When methane is released chronically, over decades, the concentration in the atmosphere will rise to a new equilibrium value. It won’t keep rising indefinitely, like CO2 would, because methane degrades while CO2 essentially just accumulates. Methane degrades into CO2, in fact, so in simulations I did (Archer and Buffett, 2005) the radiative forcing from the elevated methane concentration throughout a long release was about matched by the radiative forcing from the extra CO2 accumulating in the atmosphere from the methane as a carbon source. In the figure below, the dashed lines are from a simulation of a fossil fuel CO2 release, and the solid lines are the same model but with an added methane hydrate feedback. The radiative forcing from the methane combines the CH4 itself which only persists during the time of the methane release, plus the added CO2 in the atmosphere, which persists throughout the simulation of 100,000 years. 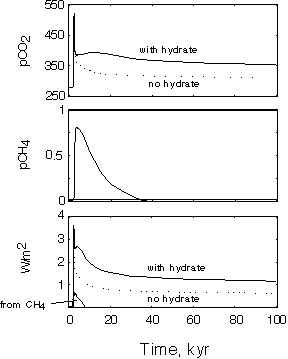 The possibility of a catastrophic release is of course what gives methane its power over the imagination (of journalists in particular it seems). A submarine landslide might release a Gigaton of carbon as methane (Archer, 2007), but the radiative effect of that would be small, about equal in magnitude (but opposite in sign) to the radiative forcing from a volcanic eruption. Detectable perhaps but probably not the end of humankind as a species.

What could happen to methane in the Arctic?

The methane bubbles coming from the Siberian shelf are part of a system that takes centuries to respond to changes in temperature. The methane from the Arctic lakes is also potentially part of a new, enhanced, chronic methane release to the atmosphere. Neither of them could release a catastrophic amount of methane (hundreds of Gtons) within a short time frame (a few years or less). There isn’t some huge bubble of methane waiting to erupt as soon as its roof melts.

And so far, the sources of methane from high latitudes are small, relative to the big player, which is wetlands in warmer climes. It is very difficult to know whether the bubbles are a brand-new methane source caused by global warming, or a response to warming that has happened over the past 100 years, or whether plumes like this happen all the time. In any event, it doesn’t matter very much unless they get 10 or 100 times larger, because high-latitude sources are small compared to the tropics.

Methane as past killing agent?

Mass extinctions like the end-Permean and the PETM do typically leave tantalizing spikes in the carbon isotopic records preserved in limestones and organic carbon. Methane has an isotopic signature, so any methane hijinks would be recorded in the carbon isotopic record, but so would changes in the size of the living biosphere, soil carbon pools such as peat, and dissolved organic carbon in the ocean. The end-Permean extinction is particularly mysterious, and my impression is that the killing mechanism for that is still up for grabs. Methane is also one of the usual suspects for the PETM, which consisted of about 100,000 years of isotopically light carbon, which is thought to be due to release of some biologically-produced carbon source, similar to the way that fossil fuel CO2 is lightening the carbon isotopes of the atmosphere today, in concert with really warm temperatures. I personally believe that the combination of the carbon isotopes and the paleotemperatures pretty much rules out methane as the original carbon source (Pagani et al., 2006), although Gavin draws an opposite conclusion, which we may hash out in some future post. In any case, the 100,000-year duration of the warming means that the greenhouse agent through most of the event was CO2, not methane.

Could there be a methane runaway feedback?.

The “runaway greenhouse effect” that planetary scientists and climatologists usually call by that name involves water vapor. A runaway greenhouse effect involving methane release (such as invoked here) is conceptually possible, but to get a spike of methane concentration in the air it would have to released more quickly than the 10-year lifetime of methane in the atmosphere. Otherwise what you’re talking about is elevated methane concentrations, reflecting the increased source, plus the radiative forcing of that accumulating CO2. It wouldn’t be a methane runaway greenhouse effect, it would be more akin to any other carbon release as CO2 to the atmosphere. This sounds like semantics, but it puts the methane system into the context of the CO2 system, where it belongs and where we can scale it.

So maybe by the end of the century in some reasonable scenario, perhaps 2000 Gton C could be released by human activity under some sort of business-as-usual scenario, and another 1000 Gton C could come from soil and methane hydrate release, as a worst case. We set up a model of the methane runaway greenhouse effect scenario, in which the methane hydrate inventory in the ocean responds to changing ocean temperature on some time scale, and the temperature responds to greenhouse gas concentrations in the air with another time scale (of about a millennium) (Archer and Buffett, 2005). If the hydrates released too much carbon, say two carbons from hydrates for every one carbon from fossil fuels, on a time scale that was too fast (say 1000 years instead of 10,000 years), the system could run away in the CO2 greenhouse mode described above. It wouldn’t matter too much if the carbon reached the atmosphere as methane or if it just oxidized to CO2 in the ocean and then partially degassed into the atmosphere a few centuries later.

The fact that the ice core records do not seem full of methane spikes due to high-latitude sources makes it seem like the real world is not as sensitive as we were able to set the model up to be. This is where my guess about a worst-case 1000 Gton from hydrates after 2000 Gton C from fossil fuels in the last paragraph comes from.

On the other hand, the deep ocean could ultimately (after a thousand years or so) warm up by several degrees in a business-as-usual scenario, which would make it warmer than it has been in millions of years. Since it takes millions of years to grow the hydrates, they have had time to grow in response to Earth’s relative cold of the past 10 million years or so. Also, the climate forcing from CO2 release is stronger now than it was millions of years ago when CO2 levels were higher, because of the band saturation effect of CO2 as a greenhouse gas. In short, if there was ever a good time to provoke a hydrate meltdown it would be now. But “now” in a geological sense, over thousands of years in the future, not really “now” in a human sense. The methane hydrates in the ocean, in cahoots with permafrost peats (which never get enough respect), could be a significant multiplier of the long tail of the CO2, but will probably not be a huge player in climate change in the coming century.

Could methane be a point of no return?

Actually, releasing CO2 is a point of no return if anything is. The only way back to a natural climate in anything like our lifetimes would be to anthropogenically extract CO2 from the atmosphere. The CO2 that has been absorbed into the oceans would degas back to the atmosphere to some extent, so we’d have to clean that up too. And if hydrates or peats contributed some extra carbon into the mix, that would also have to be part of the bargain, like paying interest on a loan.

148 Responses to "Much ado about methane"