Clouds and water vapor accounts for only a tiny fraction of all water on Earth, but in spite of it, this moisture in the atmosphere is crucially important to replenishing drinking water reservoirs, crop yields, distribution of vegetation zones, and so on. This is the case because in the atmosphere, clouds and water vapor, transports a vast amount of water from oceans to land, where it falls out as precipitation. Scientists generally agree that rising temperatures in the coming decades will affect this cycling of water. And most climate models successfully simulate a global intensification of rainfall. However, physical models often disagree with observations and amongst themselves on the amount of the intensification, and global distribution of moisture that defines dry and wet regions. 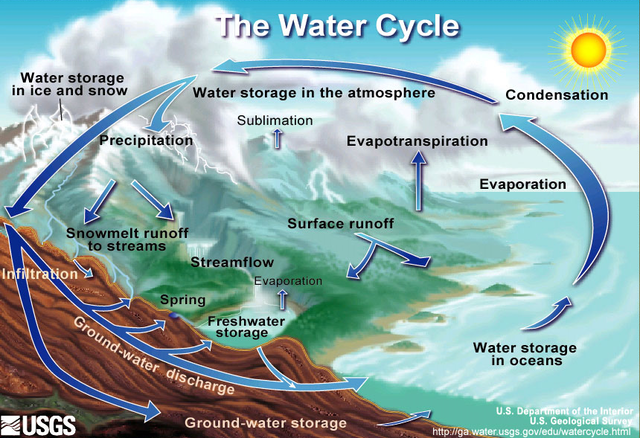 In a paper published in Environmental Research Letters, my co-author and I investigated these model discrepancies (Liepert and Previdi, 2012) (see also here). We developed a “quality control test” for climate models that is solely based on physical principles. We retroactively sum up all possible source, sink and storage terms of atmospheric moisture in models and postulate that a perfectly balanced physical model is a model without artificial leaks or floods in the system (note that small terms like methane oxidation fluxes into the atmosphere, or changes in total cloud water were not included). This approach of “self-consistency” is in contrast to previous studies where scientists performed model “reality checks” of comparisons with uncertainty prone precipitation observations. Eighteen state-of-the-art climate models as described in the United Nations 4th Assessment Report (IPCC-AR4) of the Intergovernmental Panel on Climate Change were included.

We found that most models predict an increase in moisture coming towards land in the course of the 21st century due to larger warming of land versus ocean surfaces with moderately increasing greenhouse gas concentrations. Some models, however predict radically opposite results, But these few models have large biases, which strongly affects the multi-model mean. The multi-model mean is often used in climate science and climate impact studies as “best predictor” since it smooths over model inconsistencies. These biases appear to be associated with ‘leaks’ in the model whereby water does not appear to be conserved. Some model leaks are even bigger than the anticipated global precipitation changes in the 21st century. The multi-model average is therefore biased by these few and has an average “leak” of the size of the discharge of the Mississippi river!

With our self-consistency test we were able to identify the outliers and narrow the prediction uncertainty. Only using the consistent models, we expect that in this century, the atmosphere will increasingly transport moisture towards land by the size of the river Nile, and with a model uncertainty of up to 13 percent of increase.

It is difficult for models to keep track of the small amount of water contained in the atmosphere (a thousandth of a percent of the total water on Earth). On the other hand, it is crucially important to plug leaks in physical climate models because water in the atmosphere plays an important role in the energy balance of the Earth. A bit fewer clouds, due to the leaks, can let extra solar energy reach the earth surface and heat up the planet – lost water vapor would have the opposite effect. This spurious energy flux in leaky models constitutes a “ghost” forcing of climate. We calculate that the ghost forcing in the IPCC models ranges from -1 to +6 watts per square meter, a forcing comparable to the size of non-carbon dioxide greenhouse gases – though since it is roughly constant in time it doesn’t impact the transient runs directly.

These results show that independent quality controls on climate model simulations are crucial for assessing the quality of future climate change predictions. Not all models are equally good and should be utilized in climate impact studies.

Climate impact models are used, along with crop yield, and hydrology models for instance, to inform far reaching decision-making. Climate research institutions are under pressure to build more accurate, more complex models that incorporate not only the physical climate, but also ecosystem processes and perhaps eventually, economic impacts. Testing and quality control should of course accompany these model developments, and it is to the credit of the modeling groups that they archive enough information in the public archives of CMIP3 and now CMIP5 that we can do these tests independently, assess the remaining problems and hopefully improve the predictions.

54 Responses to "Plugging the leaks"