You are here: Home / Climate Science / Arctic and Antarctic / Weighing change in Antarctica 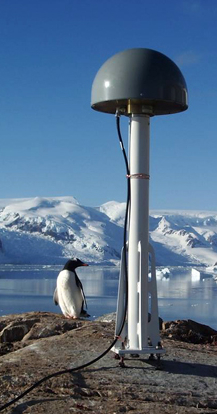 Determining whether polar ice sheets are shrinking or growing, and what their contribution is to changes in sea level, has motivated polar scientists for decades. Genuine progress began in the early 1990s when satellite observations started to provide (nearly) spatially comprehensive sets of observations. Three very different, and hence complementary, approaches are now employed, although each has a particular limitation:

Our recently published Nature paper (King et al, 2012), used GRACE gravity data to infer the ice mass trends as in previous work, but with an updated estimate of the GIA correction.

What is GIA? Changes in ice loading during the last hundred thousand years or so, and particularly since the Last Glacial Maximum (LGM), combined with the mantle’s relatively high viscosity, produce ongoing deformation within the solid earth as it seeks gravitational equilibrium – that basically means that the more ice that is on top of the crust, the more the crust around it deforms. Because the density of the solid earth is approximately three-times greater than ice, 3 km of ice deforms the crust by about 1km. When ice melts, the crust slowly moves back up and this creates a mass (and hence gravity) trend for many thousands of years.

Subtracting the GIA signal from GRACE data would not be a problem if we knew exactly the history of the evolution of the ice sheets and the rheology and spatially varying structure of the solid Earth. However, we don’t. The greatest impediment is the uncertainty in reconstructing the post-LGM Antarctic ice sheet. Unlike the formerly-glaciated parts of the Northern Hemisphere, 98% of Antarctic bedrock remains covered by ice and the ice sheet periphery is covered by extensive ice shelves; together these introduce substantial uncertainty in reconstructions. Indeed, previous estimates of the extra volume of Antarctic ice at LGM, compared to present-day, ranging from 3 to >30m of equivalent sea level (Bentley, 2010).

Previous models of GIA, based on ice sheet history constraints such as the ICE-5G reconstruction, have implied that corrections to the GRACE-derived ice mass loss around 100-200 Gt/yr are required, which is large compared to the expected present-day rate of ice-mass change.

Over the last ten years, there has however been a big increase in field measurements that provide more constraints on both the ice history and present-day bedrock uplift, particularly in West Antarctica. For instance, constraints on LGM ice extent and elevation have been obtained based on new geomorphological mapping combined with cosmogenic isotope dating of boulders left behind as the ice sheet retreated. These data consistently show that the LGM volume of West Antarctica was much less than previous data suggested and less than that were used in ICE-5G. In East Antarctica, ice core data show increased accumulation following the LGM until the last few thousand years. The long time required to discharge this extra snow means much of the East Antarctic ice sheet must be thicker now than at LGM, with the exception being the coastal perimeter where retreat of the ice edge was widespread.

In our paper, we used our own ice-sheet reconstruction for the GIA correction (Whitehouse et al., 2012a; 2012b). It is based on a numerical ice sheet model, tuned to fit the new geological data, and estimates the post-LGM Antarctic contribution to sea level of ~8m – near the lowest estimates previously published (Bentley, 2010). The resulting GIA model (called W12a) shows much lower rates of uplift in West Antarctica than previous models. In East Antarctica it shows inland subsidence and coastal uplift.

These results can be tested directly against global positioning system (GPS) measurements of how the Antarctic bedrock is moving vertically. The spatial distribution of sites is limited at present – because they need to placed directly on rocky outcrops – and there are only a few such sites in East Antarctica. In addition, some of the West Antarctic GPS records are campaign-based rather than continuous and hence are less precise than we would like – although this is being tackled through the POLENET programme. Nevertheless, GPS sites have systematically lower rates of uplift than previously predicted and our new GIA model (W12a) has much closer agreement than other models (King et al, 2012).

So how does applying W12a affect estimates of ice mass change? The GRACE observations over Antarctica suggest a near-zero change in the combination of ice and solid earth mass redistribution; the magnitude of our GIA correction is substantially smaller than previous models have suggested and hence we produce a systematically lower estimate of ice mass change from GRACE data: we estimate that Antarctica is losing 69±18 Gigatonnes per year (Gt/yr) into the oceans over 2002-2010 – equivalent to +0.19mm/yr globally-averaged sea level change, or about 6% of the sea-level change during that period. Our result still falls within the range of estimates produced from the other two independent techniques outlined above, but is distinctly toward the lower end of the mass-loss range. Our estimate is about half to a third of the most recent estimates based on GRACE data (Velicogna, 2009; Chen et al, 2009. West Antarctica appears to be losing mass about twice as fast, but this is partially offset by East Antarctic ice sheet accumulation.

Despite the better fit to observations in the GIA model, significant uncertainties remain. We used an ensemble of ice sheet model runs and plausible Earth models to place bounded constraints on our mass change estimate. The East Antarctic rate of growth spans +7 to +89 Gt/yr – ranging between being effectively in balance to growing substantially. We need further field data from key areas of East Antarctica to reject some of the ice model scenarios – although there are fewer rock outcrops to sample geologically and geodetically in this region, there are still large regions where no, or few, data have been collected and/or results have been published. The bounds in West Antarctica (loss of between 128 and 103 Gt/yr) reflect a much smaller GIA uncertainty together with a much small surface area. Substantial ice sheet changes that occurred during the last hundreds to few thousands of years remain poorly quantified and are not included in our model. These may be particularly important in parts of West Antarctica, and particularly the Antarctic Peninsula, where mantle viscosity is estimated to be lower and hence more responsive to recent fluctuations in ice volume (Nield et al, 2012).

GRACE data are still being collected but the mission has now begun to rundown. With a much-needed GRACE follow-on mission expected to launch around 2017, observation and modelling of the Antarctic GIA will continue to give us insights into the ice sheet history – from LGM through to the present – and hence provide the context for any future changes.

31 Responses to "Weighing change in Antarctica"