You are here: Home / Climate Science / Paleoclimate: The End of the Holocene
Translations: (

A while ago, I discussed here the new, comprehensive climate reconstruction from the PAGES 2k project for the past 2000 years. But what came before that? Does the long-term cooling trend that ruled most of the last two millennia reach even further back into the past?

Over the last decades, numerous researchers have painstakingly collected, analyzed, dated, and calibrated many data series that allow us to reconstruct climate before the age of direct measurements. Such data come e.g. from sediment drilling in the deep sea, from corals, ice cores and other sources. Shaun Marcott and colleagues for the first time assembled 73 such data sets from around the world into a global temperature reconstruction for the Holocene, published in Science. Or strictly speaking, many such reconstructions: they have tried about twenty different averaging methods and also carried out 1,000 Monte Carlo simulations with random errors added to the dating of the individual data series to demonstrate the robustness of their results.

To show the main result straight away, it looks like this: 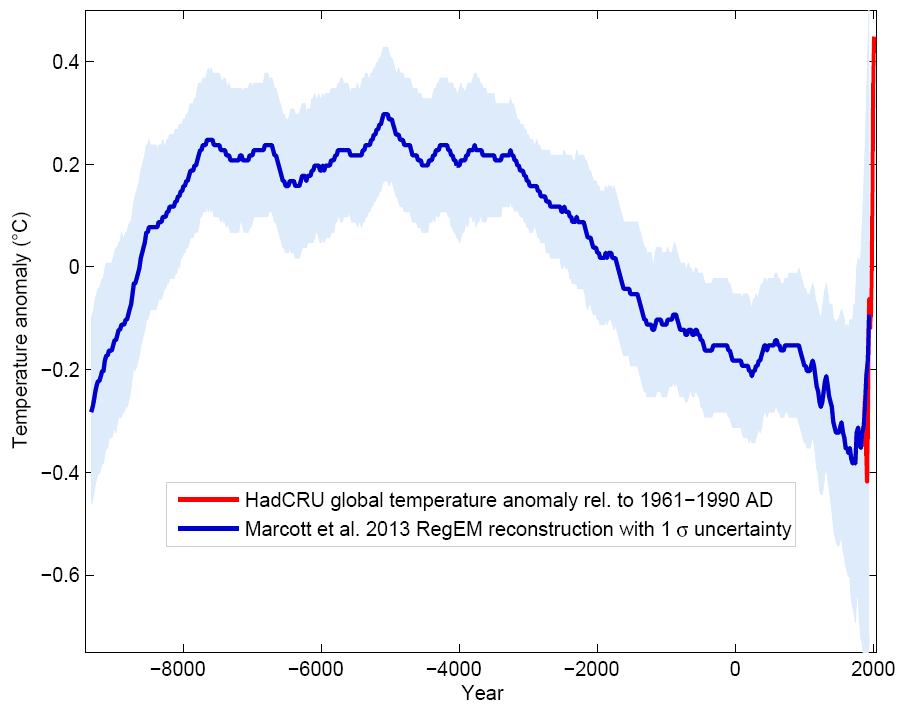 Figure 1 Blue curve: Global temperature reconstruction from proxy data of Marcott et al, Science 2013. Shown here is the RegEM version – significant differences between the variants with different averaging methods arise only towards the end, where the number of proxy series decreases. This does not matter since the recent temperature evolution is well known from instrumental measurements, shown in red (global temperature from the instrumental HadCRU data). Graph: Klaus Bitterman.

The climate curve looks like a “hump”. At the beginning of the Holocene – after the end of the last Ice Age – global temperature increased, and subsequently it decreased again by 0.7 ° C over the past 5000 years. The well-known transition from the relatively warm Medieval into the “little ice age” turns out to be part of a much longer-term cooling, which ended abruptly with the rapid warming of the 20th Century. Within a hundred years, the cooling of the previous 5000 years was undone. (One result of this is, for example, that the famous iceman ‘Ötzi’, who disappeared under ice 5000 years ago, reappeared in 1991.)

The shape of the curve is probably not surprising to climate scientists as it fits with the forcing due to orbital cycles. Marcott et al. illustrate the orbital forcing with this graphic: 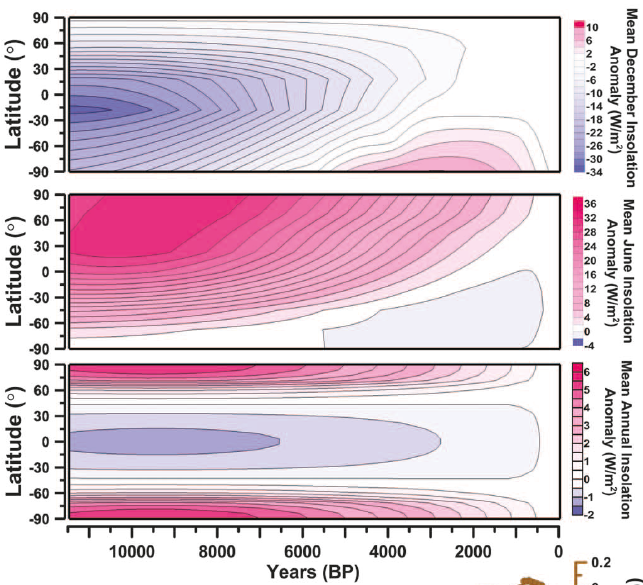 Figure 2 Changes in incoming solar radiation as a function of latitude in December, January and annual average, due to the astronomical Milankovitch cycles (known as orbital forcing). Source: Marcott et al., 2013.

In the bottom panel we see the sunlight averaged over the year, as it depends on time and latitude. It declined strongly in the mid to high latitudes over the Holocene, but increased slightly in the tropics. In the Marcott reconstruction the global temperature curve is dominated primarily by the large temperature changes in northern latitudes (30-90 °N). For this, the middle panel is particularly relevant: the summer maximum of the incoming radiation. That reduces massively during the Holocene – by more than 30 watts per square meter. (For comparison: the anthropogenic carbon dioxide in the atmosphere produces a radiative forcing of about 2 watts per square meter – albeit globally and throughout the year.) The climate system is particularly sensitive to this summer insolation, because it is amplified by the snow- and ice-albedo feedback. That is why in the Milanković theory summer insolation is the determining factor for the ice age cycles – the strong radiation maximum at the beginning of the Holocene is the reason why the ice masses of the last Ice Age disappeared.

However a puzzle remains: climate models don’t seem to get this cooling trend over the last 5,000 years. Maybe they are underestimating the feedbacks that amplify the northern orbital forcing shown in Fig. 2. Or maybe the proxy data do not properly represent the annual mean temperature but have a summer bias – as Fig. 2 shows, it is in summer that the solar radiation has declined so strongly since the mid-Holocene. As Gavin has just explained very nicely: a model-data mismatch is an opportunity to learn something new, but it takes work to find out what it is.

Comparison with the PAGES 2k reconstruction

The data used by Marcott et al. are different from those of the PAGES 2k project (which used land data only) mainly in that they come to 80% from deep-sea sediments. Sediments reach further back in time (far further than just through the Holocene – but that’s another story). Unlike tree-ring data, which are mainly suitable for the last two thousand years and rarely reach further. However, the sediment data have poorer time resolution and do not extend right up to the present, because the surface of the sediment is disturbed when the sediment core is taken. The methods of temperature reconstruction are very different from those used with the land data. For example, in sediment data the concentration of oxygen isotopes or the ratio of magnesium to calcium in the calcite shells of microscopic plankton are used, both of which show a good correlation with the water temperature. Thus each sediment core can be individually calibrated to obtain a temperature time series for each location.

Overall, the new Marcott reconstruction is largely independent of, and nicely complementary to, the PAGES 2k reconstruction: ocean instead of land, completely different methodology. Therefore, a comparison between the two is interesting: 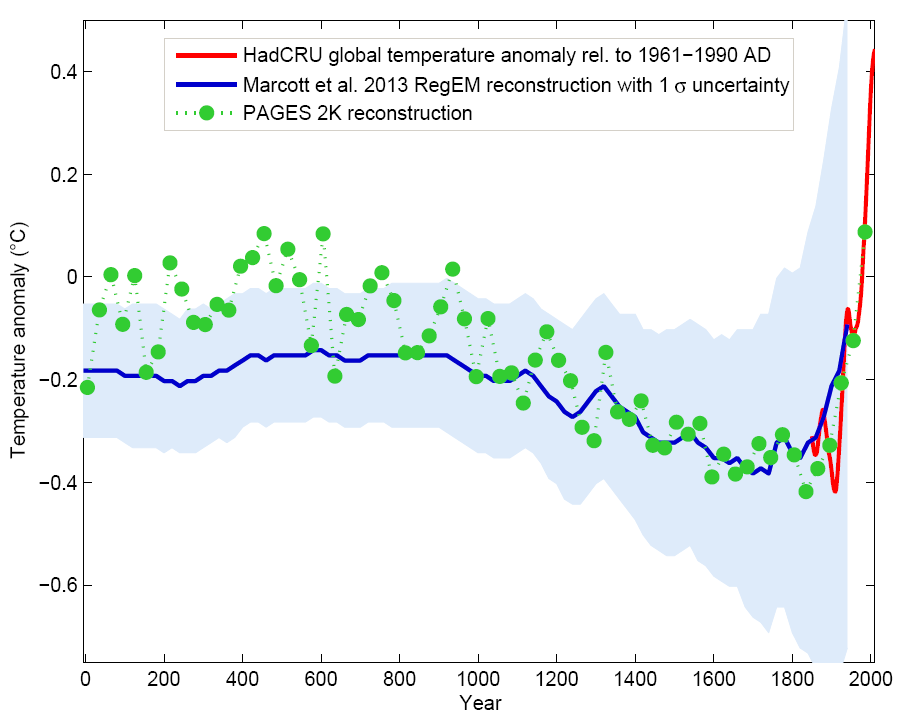 Figure 3 The last two thousand years from Figure 1, in comparison to the PAGES 2k reconstruction (green), which was recently described here in detail. Graph: Klaus Bitterman.

As we can see, both reconstruction methods give consistent results. That the evolution of the last one thousand years is virtually identical is, by the way, yet another confirmation of the “hockey stick” by Mann et al. 1999, which is practically identical as well (see graph in my PAGES article).

Is the modern warming unique?

Because of the above-mentioned limitations of sediment cores, the new reconstruction does not reach the present but only goes to 1940, and the number of data curves used already strongly declines before that. (Hence we see the uncertainty range getting wider towards the end and the reconstructions with different averaging methods diverge there – we here show the RegEM method because it deals best with the decreasing data coverage. For a detailed analysis see the article by statistician Grant Foster.) The warming of the 20th Century can only be seen partially – but this is not serious, because this warming is very well documented by weather stations anyway. There can be no doubt about the climatic warming during the 20th Century.

There is a degree of flexibility on how the proxy data (blue) should be joined with the thermometer data (red) – here I’ve done this so that for the period 1000 to 1940 AD the average temperature of the Marcott curve and the PAGES 2k reconstruction are equal. I think this is better than the choice of Marcott et al. (whose paper was published before PAGES 2k) – but this is not important. The relative positioning of the curves makes a difference for whether the temperatures are slightly higher at the end than ever before in the Holocene, or only (as Marcott et al write) higher than during 85% of the Holocene. Let us just say they are roughly as high as during the Holocene optimum: maybe slightly cooler, maybe slightly warmer. This is not critical.

The important point is that the rapid rise in the 20th Century is unique throughout the Holocene. Whether this really is true has been intensively discussed in the blogs after the publication of the Marcott paper. Because the proxy data have only a coarse time resolution – would they have shown it if there had been a similarly rapid warming earlier in the Holocene?

I think for three reasons it is extremely likely that there was not such a rapid warming before:

1. There are a number of high-resolution proxy data series over the Holocene, none of which suggest that there was a previous warming spike as strong as in the 20th Century. Had there been such a global warming before, it would very likely have registered clearly in some of these data series, even if it didn’t show up in the averaged Marcott curve.

2. Grant Foster performed the test and hid some “20th C style” heating spikes in earlier parts of the proxy data to see whether they are revealed by the method of Marcott et al – the answer is a resounding yes, they would show up (albeit attenuated) in the averaged curve, see his article if you are interested in the details. [Update 18 Sept: one of our readers has confirmed this conclusion with a different method (Fourier filtering). Thanks!]

3. Such heating must have a physical basis, and it would have to have quickly disappeared again (would it have lasted, it would be even more evident in the proxy data). There is no evidence in the forcing data that such a climate forcing could have suddenly appeared and disappeared, and I cannot imagine what could have been the mechanism. (A CO2-induced warming would persist until the CO2 concentration decays again over thousands of years – and of course we have good data on the concentration of CO2 and other greenhouse gases for the whole Holocene.)

The curve (or better curves) of Marcott et al. will not be the last word on the global temperature history during the Holocene; like Mann et al. in 1998 it is the opening of the scientific discussion. There will certainly be alternative proposals, and here and there some corrections and improvements. However, I believe that (as was the case with Mann et al. for the last millennium) the basic shape will turn out to be robust: a relatively smooth curve with slow cooling trend lasting millennia from the Holocene optimum to the “little ice age”, mainly driven by the orbital cycles. At the end this cooling trend is abruptly reversed by the modern anthropogenic warming.

The following graph shows the Marcott reconstruction complemented by some context: the warming at the end of the last Ice Age (which 20,000 years ago reached its peak) and a medium projection for the expected warming in the 21st Century if humanity does not quickly reduce greenhouse gas emissions. 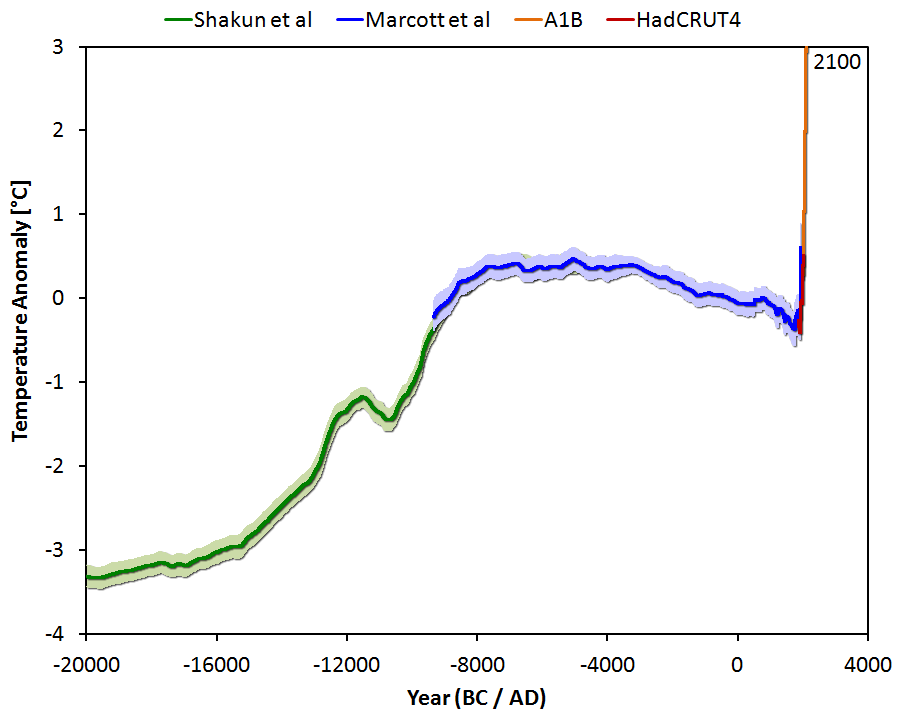 Figure 4 Global temperature variation since the last ice age 20,000 years ago, extended until 2100 for a medium emissions scenario with about 3 degrees of global warming. Graph: Jos Hagelaars.

By 2100, global average temperatures will probably be 5 to 12 standard deviations above the Holocene temperature mean.

In other words: We are catapulting ourselves way out of the Holocene.

Just looking at the known drivers (climate forcings) and the actual temperature history shows it directly, without need for a climate model: without the increase in greenhouse gases caused by humans, the slow cooling trend would have continued. Thus virtually the entire warming of the 20th Century is due to man. This May, for the first time in at least a million years, the concentration of carbon dioxide in our atmosphere has exceeded the threshold of 400 ppm. If we do not stop this trend very soon, we will not recognize our Earth by the end of this century.

66 Responses to "Paleoclimate: The End of the Holocene"