Much media attention has been directed at the possibility of an El Niño brewing this year. Many outlets have drawn comparison with the 1997-98 super El Niño. So, what are the odds that El Niño will occur? And if it does, how strong will it be?

To track El Niño, meteorologists at the NOAA/NWS Climate Prediction Center (CPC) release weekly and monthly updates on the status of the El Niño-Southern Oscillation (ENSO). The International Research Institute (IRI) for Climate and Society partner with us on the monthly ENSO release and are also collaborators on a brand new “ENSO blog” which is part of www.climate.gov (co-sponsored by the NOAA Climate Programs Office).

Blogging ENSO is a first for operational ENSO forecasters, and we hope that it gives us another way to both inform and interact with our users on ENSO predictions and impacts. In addition, we will collaborate with other scientists to profile interesting ENSO research and delve into the societal dimensions of ENSO.

As far back as November 2013, the CPC and the IRI have predicted an elevated chance of El Niño (relative to historical chance or climatology) based on a combination of model predictions and general trends over the tropical Pacific Ocean. Once the chance of El Niño reached 50% in March 2014, an El Niño Watch was issued to alert the public that conditions are more favorable for the development of El Niño. 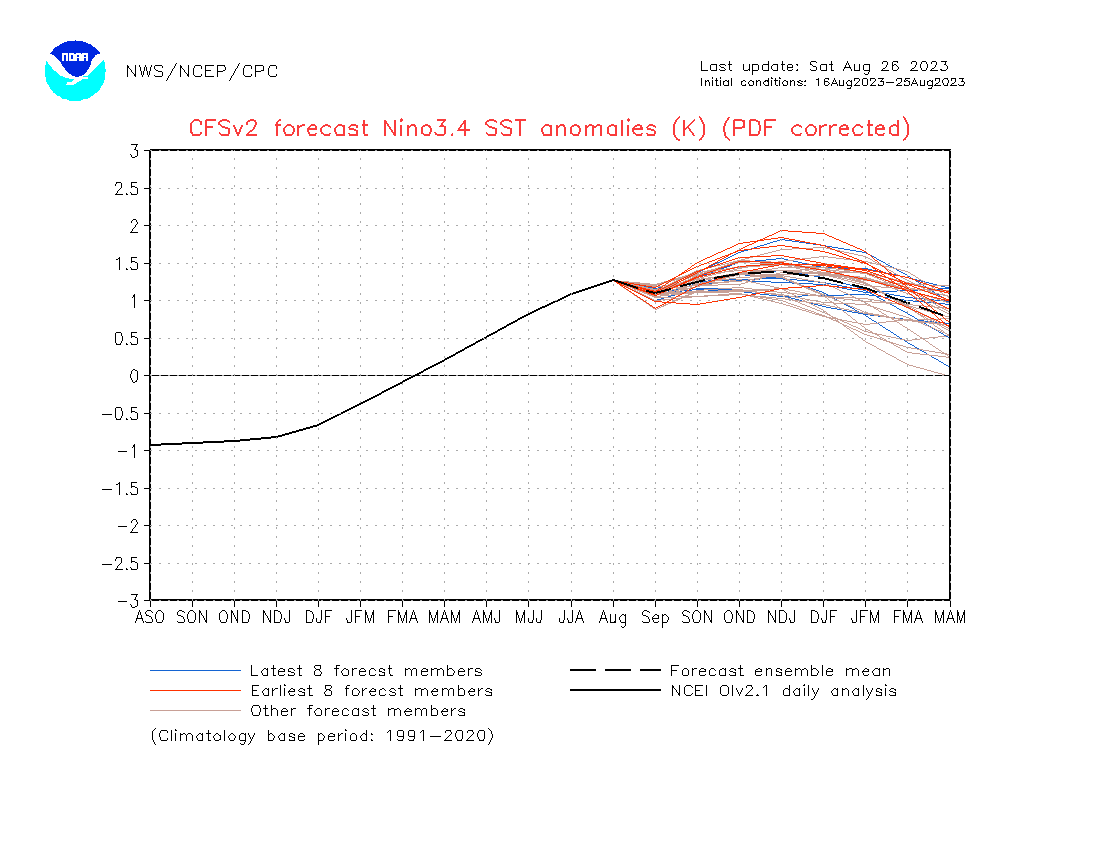 Current forecasts for the Nino-3.4 SST index (as of 5 May 2014) from the NCEP Climate Forecast System version 2 model

More recently, on May 8th, the CPC/IRI ENSO team increased the chance that El Niño will develop, with a peak probability of ~80% during the late fall/early winter of this year. El Nino onset is currently favored sometime in the early summer (May-June-July). At this point, the team remains non-committal on the possible strength of El Niño preferring to watch the system for at least another month or more before trying to infer the intensity. But, could we get a super strong event? The range of possibilities implied by some models allude to such an outcome, but at this point the uncertainty is just too high. While subsurface heat content levels are well above average (March was the highest for that month since 1979 and April was the second highest), ENSO prediction relies on many other variables and factors. We also remain in the spring prediction barrier, which is a more uncertain time to be making ENSO predictions.

Could El Niño predictions fizzle? Yes, there is roughly a 2 in 10 chance at this point that this could happen. It happened in 2012 when an El Nino Watch was issued, chances became as high as 75% and El Niño never formed. Such is the nature of seasonal climate forecasting when there is enough forecast uncertainty that “busts” can and do occur. In fact, more strictly, if the forecast probabilities are “reliable,” an event with an 80% chance of occurring should only occur 80% of the time over a long historical record. Therefore, 20% of the time the event must NOT occur (click here for a description of verification techniques).

While folks might prefer total certainty in our forecasts, we live in an uncertain world. El Niño is most likely to occur this year, so please stay attentive to the various updates linked above and please visit our brand new ENSO blog.

This month’s open thread. In order to give everyone a break, no discussion of mitigation options this month – that has been done to death in previous threads. Anything related to climate science is totally fine: Carbon dioxide levels maybe, or TED talks perhaps…