For many years, RealClimate has been educating the public about climate science. The value of climate scientists patiently explaining the science and rebutting misinformation directly with the public cannot be overestimated. When I began investigating this issue, my initial searches led me here, which was invaluable in increasing my understanding of our climate and making sense of misinformation. RealClimate has inspired and empowered a host of climate communicators such as myself to step forward and help make climate science more accessible to the general public.

To further the work of educating the public, and empowering people to communicate the realities of climate change, the Skeptical Science team has collaborated with The University of Queensland to develop a MOOC, Making Sense of Climate Science Denial. MOOC stands for Massive (we’ve already had thousands of students sign up from over 130 countries) Open (available for free to everyone) Online (web-based, no software required) Course.

The course examines the science of climate science denial. Why do a small but vocal minority reject the scientific evidence for climate change? What techniques do they use to cast doubt on the science? And we examine the all-important question – based on scientific research, how should we respond to science denial?

Several strands of research in cognitive psychology, educational research and a branch of psychology called “inoculation theory” all point the way to neutralising the influence of science denial. The approach is two-fold: communicate the science but also explain how that science can be distorted.

So our course looks at the most common climate myths you’re likely to encounter online or in the media. We examine myths casting doubt on the reality of global warming. We explore the many human fingerprints on climate change. We look at the messages from past climate change and what climate models tell us about the future. And we look at how climate change is impacting every part of society and the environment. As we examine myths touching on all these parts of climate science, we shine the spotlight on the fallacies and techniques used to distort the science. 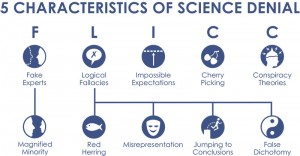 As well as our short video lectures debunking climate myths, we also interviewed many of the world’s leading scientists. I had the privilege to speak to Ben Santer, Katharine Hayhoe, Richard Alley, Phil Jones, Naomi Oreskes and let’s not forget my long, fascinating conversation with Michael Mann. I was also lucky enough to interview Sir David Attenborough at the Great Barrier Reef. We spoke to both climate scientists and social scientists who study the psychology of climate science denial. Some of the most powerful moments from those interviews came when the scientists described the attacks they’d personally experienced because of their climate research:

Our MOOC starts next Tuesday, April 28. It’s a free online course hosted by the not-for-profit edX (founded by Harvard University & MIT). It runs for 7 weeks, requiring 1 to 2 hours per week. You can enroll at http://edx.org/understanding-climate-denial.