I want to revisit a fascinating study that recently came from (mainly) the Geophysical Fluid Dynamics Lab in Princeton. It looks at the response of the Atlantic Ocean circulation to global warming, in the highest model resolution that I have seen so far. That is in the CM2.6 coupled climate model, with 0.1° x 0.1° degrees ocean resolution, roughly 10km x 10km. Here is a really cool animation.

When this model is run with a standard, idealised global warming scenario you get the following result for global sea surface temperature changes. 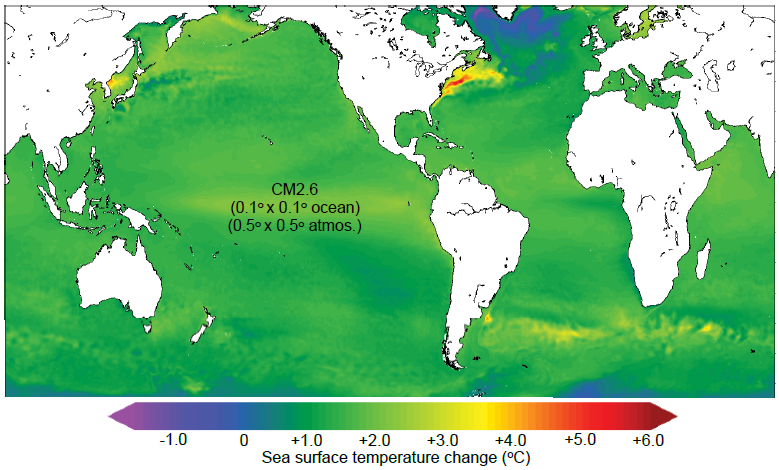 Fig. 1. Sea surface temperature change after doubling of atmospheric CO2 concentration in a scenario where CO2 increases by 1% every year. From Saba et al. 2016.

Most of the oceans got moderately warmer (green). The subpolar Atlantic got colder (blue). That’s the familiar response to a slowdown of the Gulf Stream System or AMOC (Atlantic Meridional Overturning Circulation), and that is also what the present paper attributes this to. Such a cooling of the subpolar Atlantic since the beginning of the 20th Century is actually observed, as we have discussed here.

And then there is a very large warming on the Northwest Atlantic shelf, the main topic of the paper. This is perhaps less familiar, although the general mechanism has been identified before – we have discussed it here. This is also a response to an AMOC weakening. It is likewise found in long-term SST trends in some observational analysis – see e.g. Dima and Lohmann 2010. And recently, the Gulf of Maine has experienced extreme warming (Pershing et al. 2015). The Washington Post cites Andrew Pershing of the Gulf of Maine Research Institute with the words:

2004 to 2013, we ended up warming faster than really any other marine ecosystem has ever experienced over a 10 year period.

That is just the time interval during which the RAPID project (which went into the water in 2004) measured a slowdown of the AMOC by about 3 Sv, or 20%.

The following image shows a close-up from the CM2.6 model run. 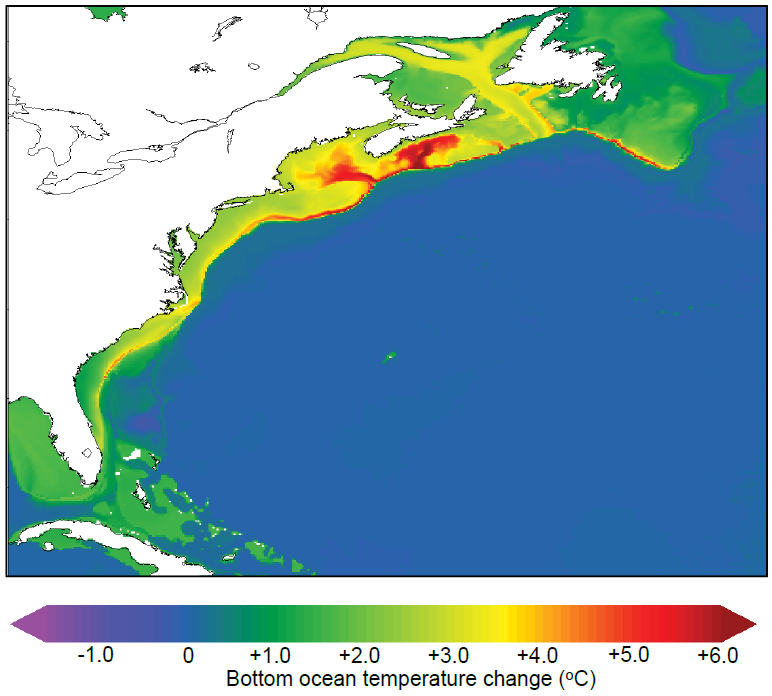 Fig. 2. Bottom temperature change in the Northwest Atlantic Ocean and Continental Shelf, in the same model run as in Fig. 1. From Saba et al. 2016.

At about 150-200 meters depth, warm Atlantic slope waters enter the Gulf of Maine through the Northeast Channel, replacing colder waters  of subpolar origin there. When the AMOC weakens, the Gulf Stream shifts north and brings warm water into the Gulf of Maine. Saba et al. conclude:

Now we are extremely lucky to have proxy data exactly from this area, see Fig. 3. 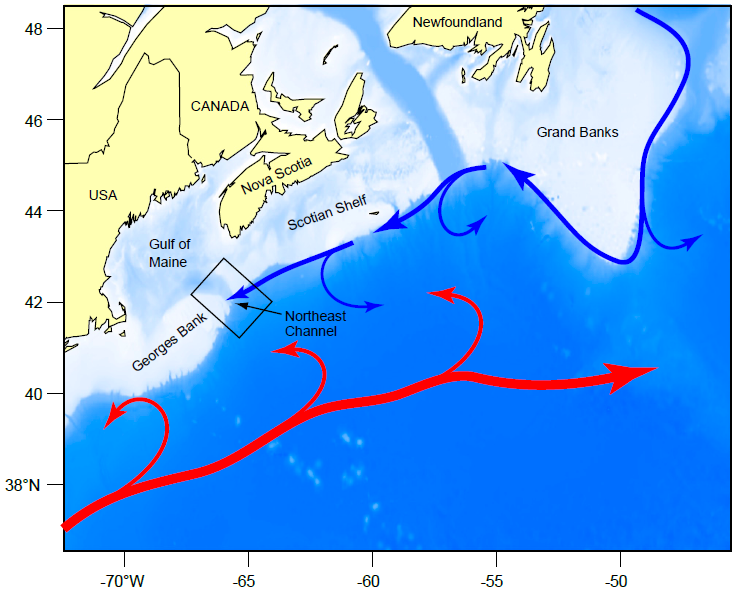 Fig. 3. Map of the Northwest Atlantic with the Gulf of Maine and the Northeast Channel. The rectangle shows the area from which deep-sea coral proxy data are presented in Sherwood et al. 2011.

To cut a complicated detective story short: Sherwood et al. 2011 are able to use nitrogen-15 isotope data to analyse the water mass in which the corals grew. They have a continuous record from 1926-2001, as well as some finds of older corals. Their data look like this. 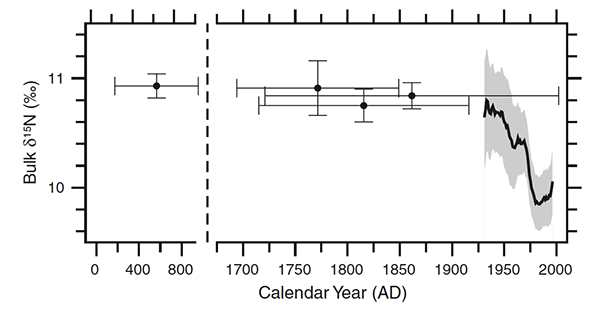 The less nitrogen-15 in the corals, the more warm slope water from the Gulf Stream and the less Labrador Sea Water were present in the mix of the sea water at the time they grew. As it happens, the coral proxy measures just the change in water masses that Saba et al. find in their model experiments!

Sherwood et al. conclude about the downward trend in nitrogen-15:

Coral δ15N is correlated with increasing presence of subtropical versus subpolar slope waters over the twentieth century.

Combining this with the model results of Saba et al., this indicates a weakening of the AMOC over the twentieth century. Considering the older corals analysed, Sherwood et al. write:

The persistence of the warm, nutrient-rich regime since the early 1970s is largely unique in the context of the last approximately 1,800 yr.

That finding is consistent with Rahmstorf et al. (2015), where we came to a very similar conclusion about the AMOC weakness after 1970 based on a totally different approach, namely using a proxy-based temperature reconstruction for the subpolar Atlantic. Our basic assumption was that weak AMOC implies a cold subpolar Atlantic, relative to the average northern hemisphere temperature. We thus used the blue region from Fig. 1 as AMOC indicator.

For the period of continuous data, here is what you get when you overlay the coral data of Sherwood et al. with our AMOC index (here based on instrumental SST data): 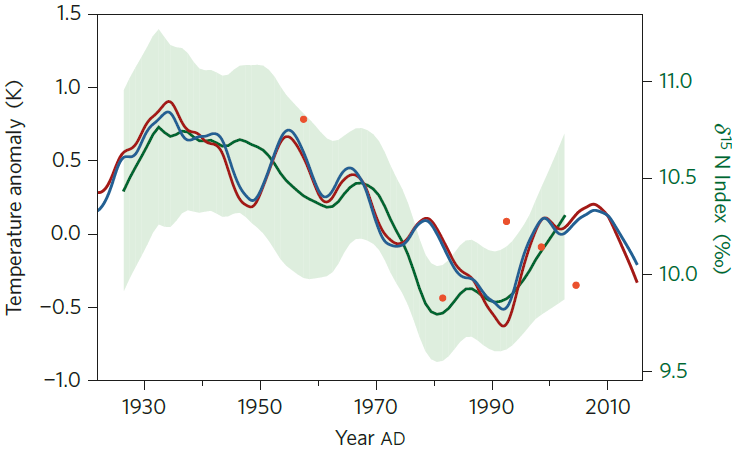 Here we thus have some pieces of the AMOC puzzle that fit beautifully together. They suggest a weakening of the AMOC by about 15-20 % over the 20th Century, superimposed by some decadal variability. A weak AMOC is found around 1980-1990. After that it recovers somewhat into the early 2000s, as suggested by both the coral data and our AMOC index. Then it declines again, as confirmed by the RAPID data.