You are here: Home / Climate Science / Boomerangs versus Javelins: The Impact of Polarization on Climate Change Communication

For advocates of climate change action, communication on the issue has often meant “finding the right message” that will spur their audience to action and convince skeptics to change their minds. This is the notion that simply connecting climate change to the right issue domains or symbols will cut through the political gridlock on the issue. The difficulty then lies with finding these magic bullet messages, figuring out if they talk about climate change in the context of with national security or polar bears or passing down a clean environment to future generations.

On highly polarized issues like climate change, however, communicating across the aisle may be more difficult than simply finding the right message. Here, the worst case scenario is not simply a message failing to land and sending you back to the drawing board. Instead, any message that your audience disagrees with may polarize that audience even further in their skepticism, leaving you in a worse position than you began. As climate change has become an increasingly partisan issue in American politics, this means that convincing Republicans to reject the party line of climate skepticism may be easier said than done.

In my recent paper in Environmental Politics, I show the results from a study examining how Republican (and Republican-leaning independent) individuals react when exposed to persuasive information on climate change. I find that after these individuals are faced with messages that go against their party line on climate change, they further oppose governmental action on the issue, become less willing to take personal action, and, from a psychological perspective, become even surer of their distaste for climate change.

My study asked the question: “how do Republican individuals perceive persuasive information on climate change action, and what types of information are more or less effective?” To answer this question, I conducted a survey experiment wherein respondents in the treatment conditions were asked to read a paragraph about climate change. Each paragraph linked climate change to a prominent concept in American politics (either free markets, national security, poverty alleviation, or natural disaster preparation), attributed the message to a fictional but realistic-sounding source (either a Republican former Congressman or Democrat), and ended with a call for public action on the issue. These passages were rigorously pretested to ensure realism and impact.

The experiment, conducted in March 2014, used a nationally representative sample of 478 Republicans and Republican-leaning independents, who were randomly sorted into one of the eight treatment groups or the control group, where respondents were asked in a single sentence to consider climate change as a political issue. Afterwards, all respondents were asked a series of questions to assess their support for or opposition to governmental action against climate change, their likelihood of taking personal action on the issue, and how sure they felt about their climate change opinions.

What I found was that every single treatment condition failed to convince respondents. In fact, treating Republicans with persuasive information made them more resistant to climate action regardless of the content or sourcing of that information. Overall, simply being exposed to pro-climate action communication appeared to polarize Republicans even further; they became more opposed to governmental action and less likely to take personal action compared to the control group. They also became more certain of their negative opinions on the issue, displaying significantly lower attitudinal ambivalence compared to the control group. What’s more, all of these treatment effects doubled to tripled in size for respondents who reported high personal interest in politics, all statistically significant outcomes. These highly politically interested individuals make up roughly one-third of Republicans in the sample and in the United States.

These are interesting results, though perhaps not unexpected given knowledge of American climate change politics. Traditionally, political communication research has focused on a phenomenon called framing, which basically deals with how information is presented to an audience. Framing effects come in two varieties: which facets of an issue are emphasized (“message effects”) and who is the communicator (“source effects”). A vast literature in political science, sociology, and psychology have shown that framing information may strongly impact how individuals perceive that information.

However, persuasive framing effects – meaning framing that shifts an individual’s opinion in the direction of the frame – have been hard to come by in climate change communication research. This is likely due to the fact that the issue is very much polarized, boasting public opinion gaps in the 40 percentage point range between Democrats and Republicans on an array of different aspects of the issue. For these polarized issues, we might expect framing effects to butt up against other effects. Specifically, the theory of motivated reasoning provides an explanation of how political identity influences how individuals process information and communication.

Motivated reasoning is essentially the concept that people may be spurred to think in specific ways by forming cognitive motivations. In particular, individuals may engage in directional motivated reasoning, which means that they have a preference to believe something and will process information in order to satisfy that preference. These motivations are borne out of aspects of one’s identity – those strongly held beliefs that a person understands to define him or herself. For instance, someone could be motivated by their identity as a New Yorker, an Ohio State fan, or, of course, a Democrat or a Republican. Motivations are not borne out of ignorance or irrationality or mis-education; they are oftentimes simply what makes someone that person.

When it comes to politics, the strength of an individual’s motivated reasoning is strongly tied to that person’s interest in politics. This relationship makes sense for multiple reasons. Given that motivations arise from strong personal identity beliefs, political motivations go hand-in-hand with interest about the subject. Furthermore, as an individual becomes more engaged with politics, they are better able to recognize and process the political cues that align with their party and ideology. From these cues, the motivated individual can deepen their motivations. For instance, political interest helps with understanding that a pro-life stance has Republican connotations while a pro-choice position is associated with the Democratic Party. Without the relevant political savvy, these phrases lack much meaning.

In my study, I found plenty of evidence of these backfire effects when it comes to Republicans and climate change action. An example of one of these findings (support for or opposition to governmental action) is shown below to illustrate how Republicans, particularly those with high personal interest in politics, respond negatively to pro-action communication. In effect, for Republican respondents with low personal interest in politics (middle plot), exposure to treatment framing seemed to have had little impact – these individuals appear generally apathetic on the issue and on politics in general. But for those with high personal interest in politics (right plot), exposure to pro-action framing triggered a considerable backfire in opposition to governmental action. 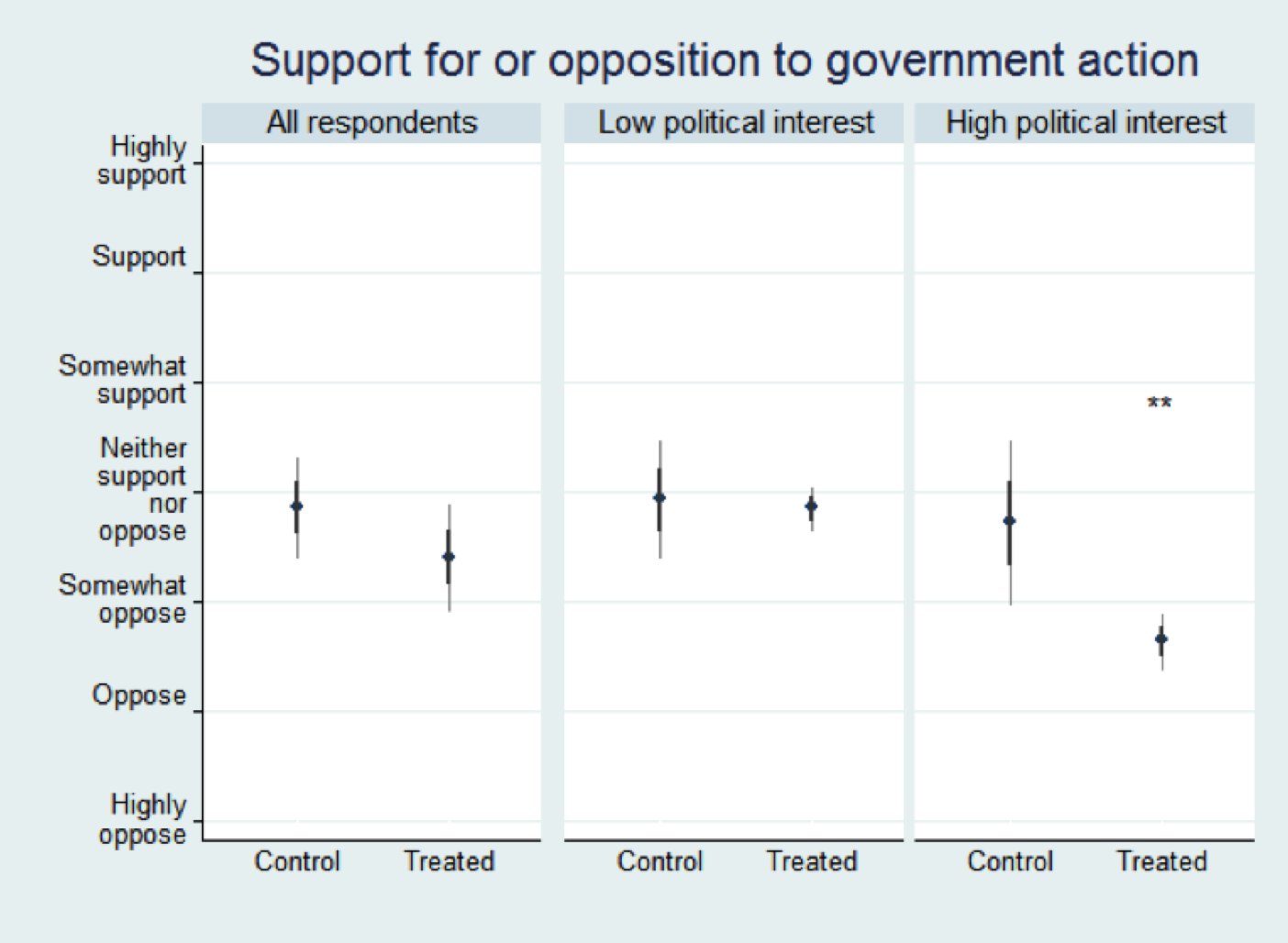 Indeed, there are many potential unseen landmines to step in when trying to persuade skeptical audiences on the issue. Say you use an ineffective message. Those frames may turn off your audience or resonate with unintended thoughts or beliefs – such as a global security message backfiring on an audience of staunch isolationists. Suppose you find an effective message but your source is seen as lacking credibility. Your audience may feel they are being pandered to and backfire that way. Even when you have an effective source and message and can produce a persuasive framing effect, there’s no telling how long that effect will last before decaying or how that framing effect fares when countered with arguments from the other side that reinforce the audience’s prior attitudes.

For audiences who are motivated to be skeptical about climate change, providing corrective information, such as debunking the climate pause, may not work either. Brendan Nyhan and Jason Reifler (2010) have shown that factually accurate information used to correct political misconceptions are likely to fail when they fly in the face of strongly-held prior beliefs – another backfire. Indeed, there is evidence that an individual’s views on climate change are less related to education and views on science as they are to cultural and political identity (Kahan et al. 2012). Simply put, people have a tendency to believe what they want to believe.

If this is the case, what is to be done about climate change communication if Republicans are difficult to reach and the political environment on climate change remains toxic? I should preface that I do not think it is impossible to persuade Republicans to reconsider their stances on the issue. Rather, the state of polarization in American politics and on climate change in particular have stacked the deck against advocates of climate action. In addition, it is currently unclear what sorts of messages are seen as consistently persuasive, which messengers are considered credible, and if it is possible to recruit these types of messengers.

However, the issue is only growing in geopolitical import and circumstances, both political and physical, may change. Social science research suggests that framing is most effective when frames are repeatedly circulated and incorporated into political discussion, in effect shifting the societal understanding of climate change to include those frames. However, this means that, besides the times and effort needed to research effective frames and messengers, advocates need to continually reach audiences whom may be strongly resistant to such communication. This may be an inefficient use of political resources.

Instead, perhaps there are other populations who may be easier to reach, and with less gnashing of teeth. A 2014 New York Times/CBS News poll found that 37% of Democrats and 49% of independents thought that the impacts of climate change will not occur until sometime in the future or not at all. A 2016 Pew Research Center poll shows that just 55% of Democrats and 41% of Independents consider climate change to be an important issue for the President and Congress. These are a pool of individuals who may be, at the outset, agnostic on the issue or even in favor of action but not yet mobilized. Moreover, they are less likely to be polarized against the issue and more open to persuasive communication.

191 Responses to "Boomerangs versus Javelins: The Impact of Polarization on Climate Change Communication"