You are here: Home / Climate Science / Mercury, the other geologically persistent planetary poison

The thing that really gets me in the gut about global warming from fossil fuel combustion is how long it will last. Carbon mined from the deep Earth and injected into the “fast carbon cycle” of the atmosphere, ocean, and land surface will continue to affect atmospheric CO2 concentrations, and climate, for hundreds of thousands of years into the future, unless we clean up the atmosphere ourselves.

It turns out that human emissions of the element mercury (Hg) will elevate mercury concentrations in the environment, and in upper trophic-level seafood, for thousands of years into the future. There are a lot of parallels to the carbon cycle. But, unlike the carbon cycle, the mercury cycle would be impossible to clean up.

The astonishing thing about the heavy metal, mercury, is how unheavy it seems to be as it runs around in the environment (Blum, 2013). Almost as massive as uranium, which they make artillery slugs and armor out of, mercury is a liquid at room temperature, and it can even evaporate into the air, plus dissolve in water. These tricks give it global mobility.

Mercury vapor, in the uncharged metal form written as Hg0, is chemically unstable in air, and it tends to oxidize (“rust”) to Hg2+, a charged ion that sticks to particles and dissolves in droplets, and rains out. But Hg2+ does an amazing trick called photo-reduction, absorbing a photon of ultraviolet sunlight and popping back up the energy hill to the Hg0 vapor phase1. Photo-reduction of Hg2+ allows mercury to float around in the atmosphere for about a year, enough time to deposit all around the world (Horowitz et al., 2017).

The global footprint of mercury deposition makes it harder to motivate ourselves to reduce emissions, in a tragedy of the commons that is totally analogous to the carbon cycle. Why (one may ask, and I will attempt to answer) should we clean up the mercury emissions from our coal plants when there are coal plants emitting mercury in China? And what’s up with “artisanal gold mining”?? (Image from Streets et al., 2017). 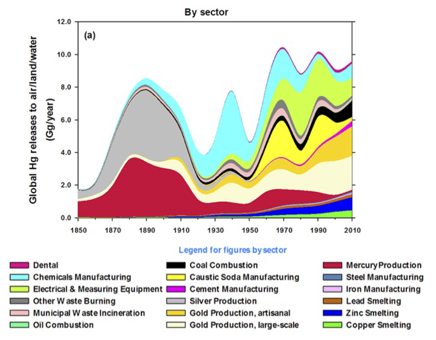 But once mercury does go to ground, it’s only the beginning of the story (Blum, 2013). Both the ocean and the land surface act like storage reservoirs in the mercury cycle, taking up mercury now when there’s a lot of it flying around, to release it back to the environment on various time scales in the future, some of them very long.

The ultimate removal pathway for mercury is deposition in ocean sediments, which is a pretty small flux relative to other fluxes in the mercury cycle. So, just like carbon, the “fast” surface cycle gets charged up with the extra load (mercury or carbon), until the slow leak flux to the solid Earth, by way of ocean sediments, finally cleans up the load. For mercury, the clean-up time scale is probably about 10,000 years (Amos et al., 2013). 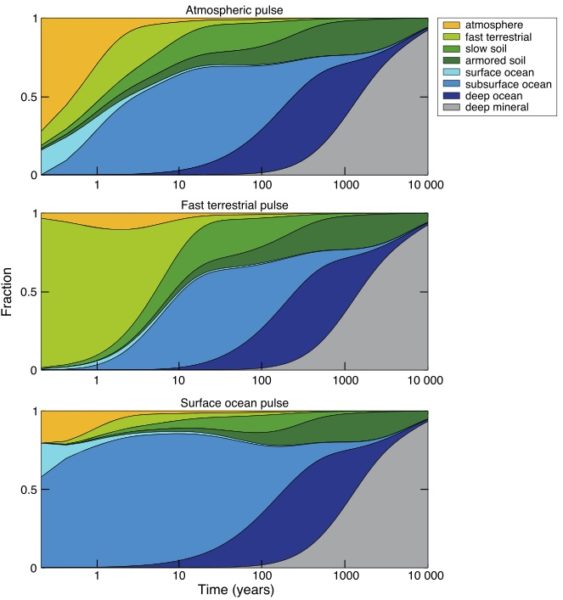 Because of mercury’s tendency to recycle after it deposits, today there is more mercury deposition called “legacy anthropogenic”, meaning recycled from emission decades ago, than there is deposition of mercury we are emitting now. So just like for carbon, we are creating an accumulating load in the mercury cycle.

From (Amos et al., 2013), showing the origins of global mercury deposition, “when from” on the left, and “where from” on the right.

Mercury deposition on land is primarily through mercury vapor uptake by plant leaves (called “dry deposition”, (Demers et al., 2007)). The mercury is carried to the ground in leaf litter, and it collects in the soil organic carbon pool. Soil organic carbon cycling is important in the carbon cycle as well, so it has been well studied, but it is a complicated world. The fate and lifetime of organic carbon in a soil is very different in, for example, a depositional swamp versus a rain-scoured and eroding hillside.

On a global scale, what happened to bomb radiocarbon (14C) from nuclear weapons testing in the 1960’s can tell us a lot about the behavior of the soil organic carbon system. It can be described in broad brush by a simple reservoir or “box” model, consisting of several reservoirs with differing carbon production rates, and turnover times ranging from years to thousands of years, with names like “slow”, “fast”, and “armoured” (Smith-Downey et al., 2010). The mercury attached to the carbon is re-released to the environment, primarily as dissolved Hg2+, when the organic carbon degrades. The Hg2+ will probably be carried to the ocean and eventually recycled from there. Mercury that goes to ground in the longest-lived organic carbon pools will continue to dribble back out to the environment for thousands of years.

In the ocean, most of the mercury that falls to the ocean surface gets quickly returned to the atmosphere, by photo-reduction of Hg2+ in the surface ocean, producing Hg0 that “evades” (think evaporates) (Soerensen et al., 2010). The elevated mercury deposition rates today have driven up the concentration of Hg2+ in the surface ocean, and the load has been carried subsurface by ocean flow. The mercury load near the sea surface also sticks to sinking particles, re-dissolving at the depths where the organic carbon in the particles degrades. When high-mercury subsurface water eventually comes back to the surface, it releases its mercury back to the atmosphere (Cossa et al., 2004). The ocean therefore acts as another mercury reservoir, which will recycle human-mined mercury back to the atmosphere for thousands of years.

Surprisingly, given that we live on land, most human exposure to mercury comes from the ocean mercury cycle, by way of seafood. Mercury bio-accumulates in fish in the form of mono-methyl mercury (MMHg, chemical form CH3Hg+). This is a quantitatively relatively minor species with an outsized impact, a little bit like methane, maybe? OK, that’s weak. MMHg is produced by bacteria, and degrades quickly enough that MMHg and Hg2+ coexist in a quasi-equilibrium in the ocean, with about 5-10% of mercury in the methylated form in most places and depths (Semeniuk and Dastoor, 2017; Archer and Blum, 2018). MMHg is the form taken up by phytoplankton and amplified up the food chain, to the point that higher trophic-level fish like most tuna, orange roughy, sea bass, swordfish, and shark are toxic to eat too often.

When we realize that we have degraded the climate system by releasing fossil carbon, we can theoretically clean it up. Although there may not be enough agricultural land to do it entirely with the currently fashionable option, bio-energy carbon capture and sequestration (BECCS), there is always chemical removal of CO2 from the atmosphere (Keith et al., 2018). Cleaning up the anthropogenic carbon is theoretically feasible because a relatively large fraction of the anthropogenic carbon, a little more than half, is still in the atmosphere. If we pulled enough CO2 out of the atmosphere, the oceans would degas CO2, slowing down the atmospheric recovery. But it would be theoretically feasible, carbon-cycle wise, to pull atmospheric pCO2 down to the 350 ppm “safe” level in a few decades2.

The one-year atmospheric lifetime of mercury is much shorter than the drawdown lifetime for carbon (decades to centuries: (Archer et al., 2009)). For this reason, a much smaller fraction of all of the anthropogenic mercury is still in the atmosphere, only about 1.5% (from Amos et al., 2013). Hg0 vapor is out of equilibrium and photo-sensitive, so it would presumably be feasible to scrub mercury from air alongside CO2 in the chemical atmosphere-scrubber plants. But most of the anthropogenic mercury has already gone to ground, on land and in the oceans, and until it dribs and drabs back into the environmental mercury cycle over thousands of years, it will be out of our reach, making a quick cleanup impossible.

And since the atmospheric Hg0 concentration is controlled by the mercury cycle with a time constant of just one year, we could never move the needle of the atmospheric Hg0 concentration, or therefore mercury deposition rates or seafood mercury loads. Once the Hg is released into the biosphere, it can only be endured, for thousands of years3. My personal feeling is that if there were any grown-ups on the planet, we wouldn’t be allowed to do this.

1I was moved to compose a haiku about Hg2+ photo-reduction.

The bromine radical chemistry referred to in the poem occurs mostly in Arctic springtime (Horowitz et al., 2017), a phenomenon analogous to ozone hole chemistry with chlorine.

2The on-line interactive ISAM carbon cycle / integrated assessment model (Cao and Jain, 2005) predicts that about 440 Gton CO2 would have to be removed from the atmosphere to achieve a concentration of 350 ppm within 20 years.

The mercury cycle goes ‘round it
A global load, and we pound it
I’ve come to believe
Our plan is to leave
A world crazier than we found it

The craziness referred to in the poem refers to neurological impacts of mercury exposure such as “mad hatter’s disease”.

Cao, L., and Jain, A.: An Earth system model of intermediate complexity: Simulation of the role of ocean mixing parameterizations and climate change in estimated uptake for natural and bomb radiocarbon and anthropogenic CO2, Journal of Geophysical Research-Oceans, 110, 10.1029/2005jc002919, 2005.

30 Responses to "Mercury, the other geologically persistent planetary poison"