You are here: Home / Climate Science / Paleoclimate / False Claims by McIntyre and McKitrick regarding the Mann et al. (1998) reconstruction

A number of spurious criticisms regarding the Mann et al (1998) proxy-based temperature reconstruction have been made by two individuals McIntyre and McKitrick ( McIntyre works in the mining industry, while McKitrick is an economist). These criticisms are contained in two manuscripts (McIntyre and McKitrick 2003 and 2004–the latter manuscript was rejected by Nature; both are collectively henceforth referred to as “MM”). MM claim that the main features of the Mann et al (1998–henceforth MBH98) reconstruction, including the “hockey stick” shape of the reconstruction, are artifacts of a) the centering convention used by MBH98 in their Principal Components Analysis (PCA) of the North American International Tree Ring Data Bank (‘ITRDB’) data, b) the use of 4 infilled missing annual values (AD 1400-1403) in one tree-ring series (the ‘St. Anne’ Northern Treeline series), and c) the infilling of missing values in some proxy data between 1972 and 1980. Each of these claims are demonstrated to be false below.

[McIntyre and McKitrick have additionally been discredited in a recent peer-reviewed article by Rutherford et al (2004)].

Principal Components Analysis (PCA) is a traditional tool for representing a large spatiotemporal dataset in terms of a smaller number of leading patterns of variation in the data. The choice of how the data are ‘centered’ in PCA (i.e., what time interval is used to define the ‘zero’ baseline for the data series) in general simply changes the relative ordering of the leading patterns of variance (or linear combinations thereof), the means of the associated Principal Components (PC) time series, and the number of statistically significant patterns in the data. The centering convention does not influence important properties of PCA such as the orthornormality of the Empirical Orthogonal Functions (EOFS) or the completeness of the eigenvector basis set.

The MBH98 reconstruction is indeed almost completely insensitive to whether the centering convention of MBH98 (data centered over 1902-1980 calibration interval) or MM (data centered over the 1400-1971 interval) is used. Claims by MM to the contrary are based on their failure to apply standard ‘selection rules’ used to determine how many Principal Component (PC) series should be retained in the analysis. Application of the standard selection rule (Preisendorfer’s “Rule N’“) used by MBH98, selects 2 PC series using the MBH98 centering convention, but a larger number (5 PC series) using the MM centering convention. Curiously undisclosed by MM in their criticism is the fact that precisely the same ‘hockey stick’ pattern that appears using the MBH98 convention (as PC series #1) also appears using the MM convention, albeit slightly lower down in rank (PC series #4) (Figure 1). If MM had applied standard selection procedures, they would have retained the first 5 PC series, which includes the important ‘hockey stick’ pattern. The claim by MM that this pattern arises as an artifact of the centering convention used by MBH98 is clearly false. 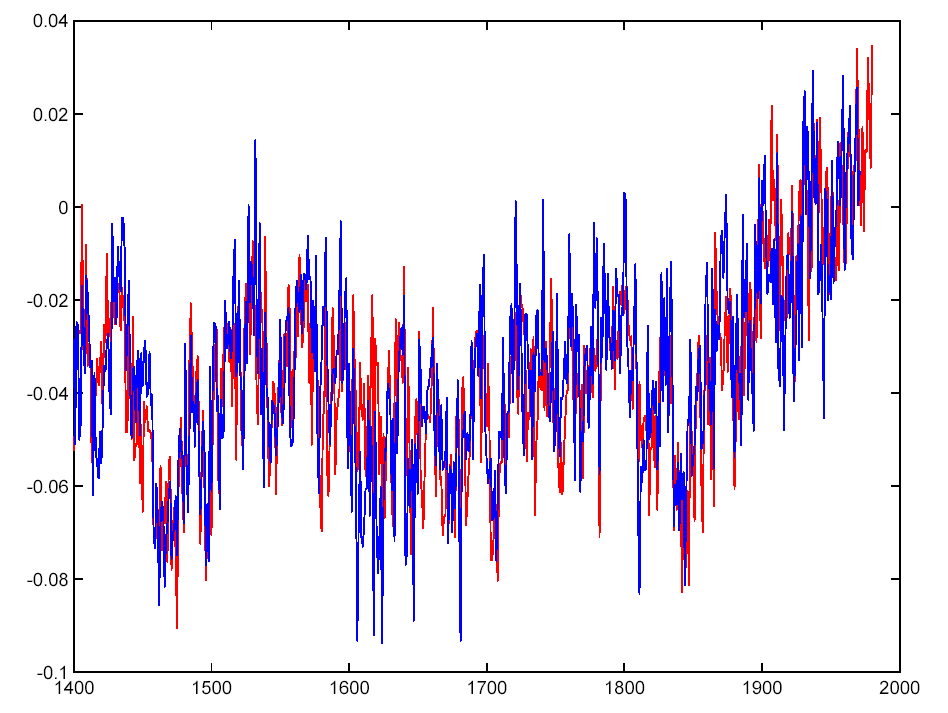 FIGURE 1. Comparison of PC #1 of the North American ITRDB tree-ring data from MBH98 (red) and PC #4 resulting from a PCA of the same dataset using the MM centering convention (blue–for visual comparison the blue curve has been adjusted to have the mean and amplitude of the red curve, as only the relative pattern of variation in the predictors matters in the MBH98 methodology).

As discussed above, MM incorrectly truncated the PC basis set at only 2 PC series based on a failure to apply standard selection rules to determine the number of PC series that should be retained in the analysis. Five, rather than two PC series, are indicated by application of standard selection rules if using the MM, rather than MBH98, centering convention to represent the North American ITRDB data. If these five series are retained as predictors, essentially the same temperature reconstruction as MBH98 is recovered (Figure 2).

To address the other spurious criticisms of MM, a 1902-1971 calibration interval was employed in this analysis to avoid any infilled missing proxy data between 1972 and 1980, and the ‘St Anne River ‘ series challenged by MM (due to 4 infilled missing values from AD 1400-1403) was eliminated. The standard measure of reconstructive skill, the ‘reduction of error’ metric (‘RE’) used by MBH98, was used to evaluate the fidelity of the resulting reconstruction using 19th century instrumental data that are independent of the calibration (RE<0 exhibits no skill, while RE= -1 is the average value for a random estimate). This evaluation indicates a clearly skillful though modestly lower verification resolved variance than in MBH98 (RE=0.22 vs. RE=0.51). 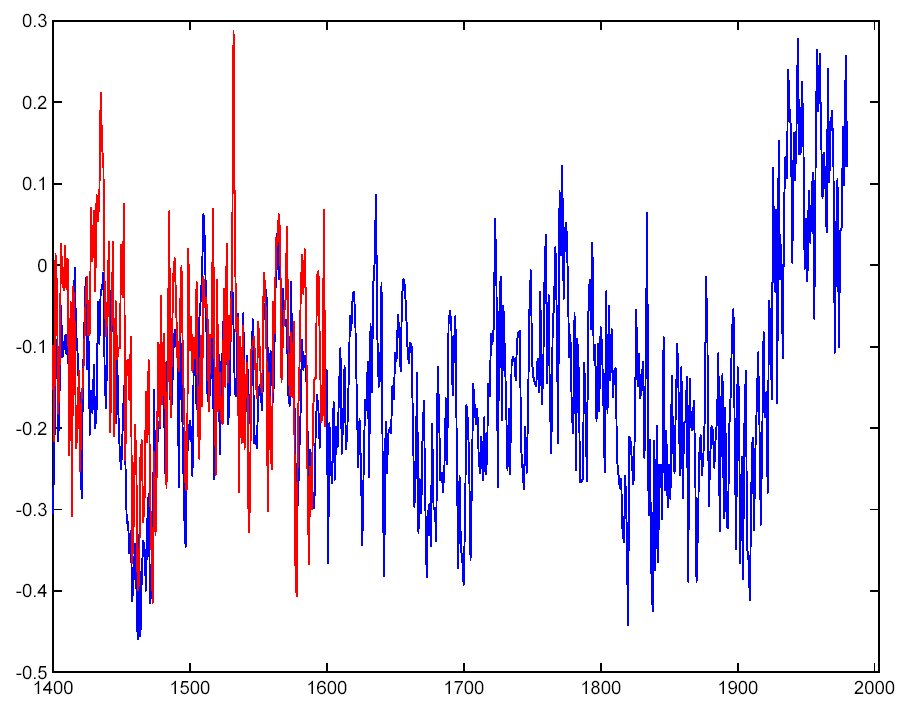 We further show that the entire issue raised by MM regarding the centering convention used in PCA is spurious by demonstrating that similar results are produced whether or not proxy networks are represented using PCA at all (Figure 3). We performed the reconstruction employing all 95 proxy indicators available in the MBH98 proxy network back to AD 1400 individually (rather than using any PC series to represent these indicators). We begin the reconstruction at the date AD 1404, avoiding the infilled missing values from AD 1400-1403 in the ‘St. Anne’ Northern Treeline tree ring series. As above, a 1902-1971 calibration period was used to avoid address the issue of missing values in some proxy series between 1972 and 1980. Each proxy record was standardized to have unit variance and zero mean over a 1902-1971 calibration period, and equal weight was applied to all proxy records in the analysis. We performed an additional analysis back to AD 1400 eliminating the ‘St. Anne’ Series entirely (Figure 3). Both analyses yield a reconstructed Northern Hemisphere mean temperature history quite similar to that of MBH98, and demonstrate skill against independent 19th century instrumental (2) data (RE=0.39, 0.33, respectively – only moderately lower than the MBH98 result RE=0.51). The central ‘hockey stick’ result of MBH98 is thus quite clearly seen to be robust to the specious criticisms raised by MM with regard to the centering convention used in the PCA of proxy data networks or the infilling of missing values in certain proxy series. 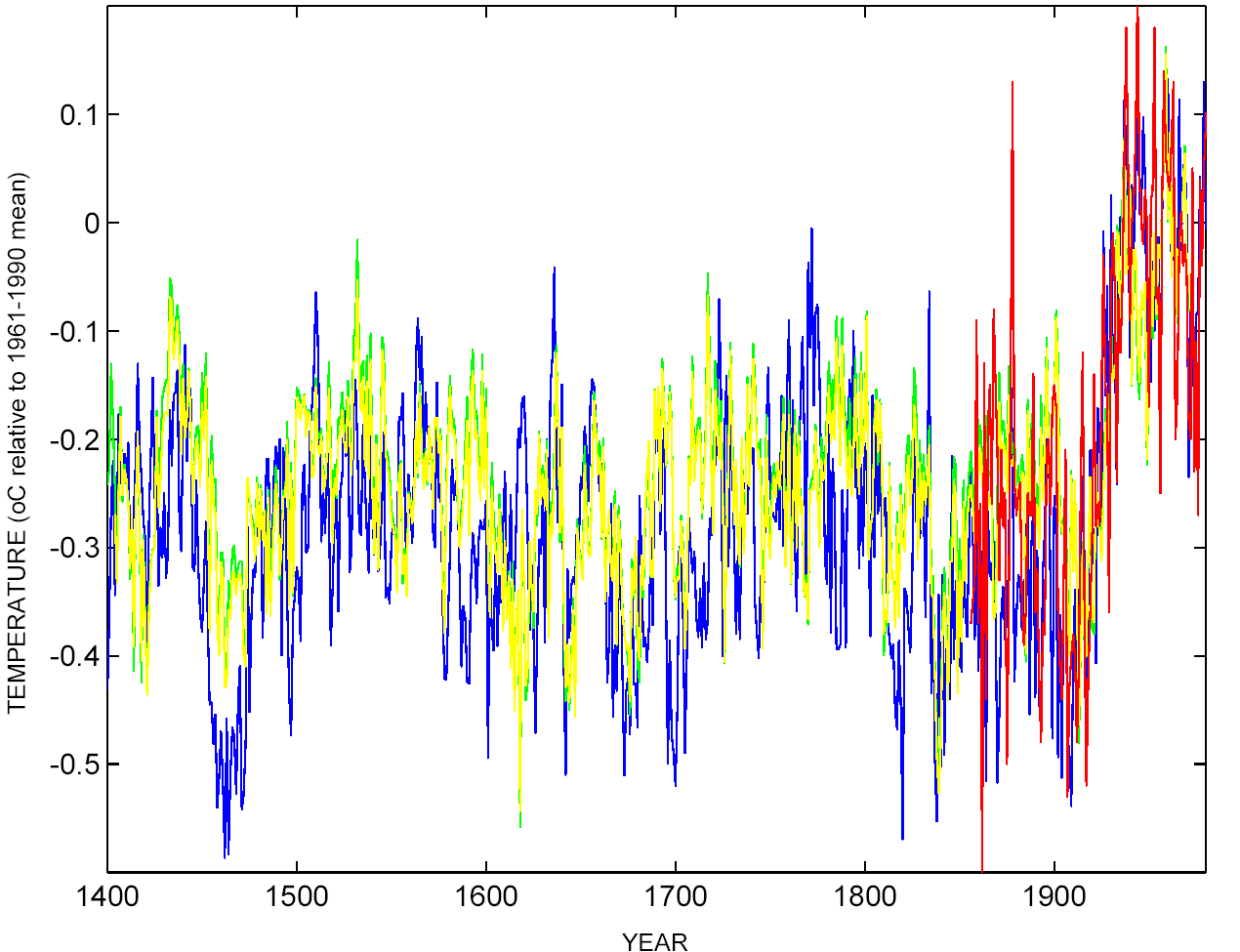 FIGURE 3. Comparison of MBH98 reconstruction from AD 1400-1980 with alternative reconstructions from AD 1400-1971 based on the direct use of the individual 95 proxy series available back to AD 1404 (yellow), and the 94 proxy series (all 95 series except the ‘St Anne’ series discussed above) available back to AD 1400 (green). Shown for comparison is the instrumental NH annual mean record 1856-1980 (red). The MBH98 reconstruction was based on a ’stepwise’ approach employing increasingly more proxy data over time, while the other two reconstructions, for simplicity, are performed with the same (’frozen’) proxy network over the entire interval.

Given that each of the criticisms of MBH98 raised by MM are demonstrably false, one might well be led to wonder how MM, using the MBH98 method and their putative ‘corrected’ version of the MBH98 proxy dataset, were able to obtain a reconstruction so at odds with the MBH98 reconstruction and virtually all existing reconstructions (in particular, in its apparent indication of anomalous 15th century warmth). Rather than ‘correcting’ the MBH98 proxy data set, we demonstrate that the reconstruction of MM resulted, instead, from their selective censoring of key indicators from the MBH98 proxy dataset. Indeed, we are able to reproduce the MM reconstruction of anomalous 15th century warmth when the entire ITRDB North American data set (and the ‘Queen Anne’ series) are censored from the proxy network (Figure 4). These data (in fact, 70% of all of the proxy data used by MBH98 prior to AD 1600) were unjustifiably censored from the MBH98 dataset by McIntyre and McKitrick (2003) in their original analysis (see Jones and Mann, 2004, and Rutherford et al, 2004 for a discussion).

MM in their more recent rejected submission to Nature, instead filtered out the ‘hockey stick’ pattern of low-frequency variability in the North American ITRDB data through the incorrect PCA truncation described above, which censors this pattern by retaining too few Principal Components series in the data. As discussed above, the MBH98 reconstruction and the variants of the reconstruction (i.e., Figures 2 and 3) that address the various spurious criticisms raised by MM, each pass statistical verification. In stark contrast, our reproduction of the MM reconstruction demonstrates that their reconstruction dramatically fails statistical verification (see Figure 5) with an RE score ( -0.76) that is statistically indistinguishable from the results expected for a purely random estimate (as a reminder, RE<0 exhibits no skill, and RE= -1 is the average value expected for a purely random estimate). In short, the supposed ‘correction’ of MBH98 by MM is seen to represent little more than a statistically meaningless, botched application of the MBH98 procedure that relies upon censoring key indicators from the MHB98 proxy data set. 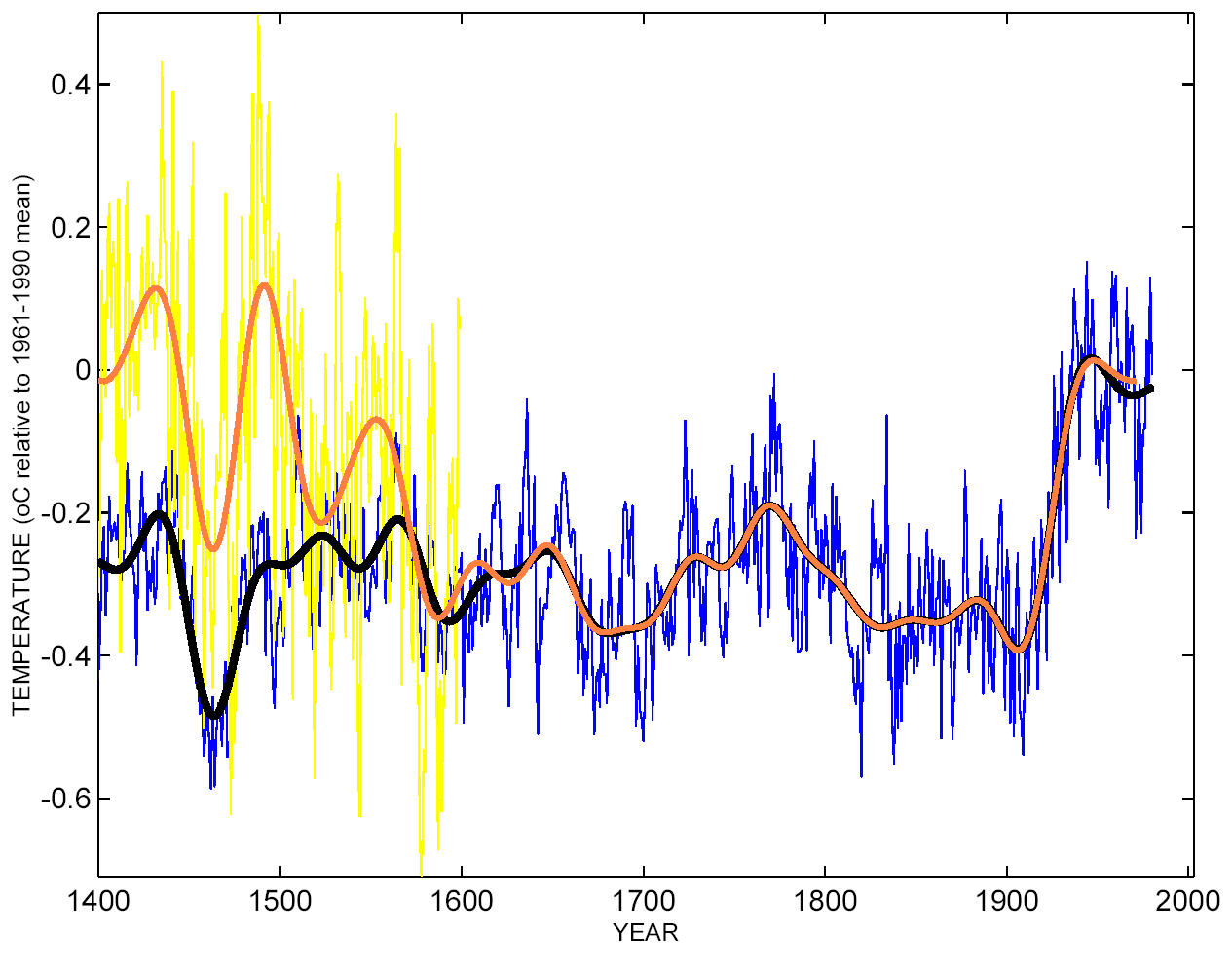 FIGURE 4. Comparison of MBH98 reconstruction (blue) from AD 1400-1980 (thick black curve is 40 year smoothed version) with a reconstruction over AD 1400-1600 (yellow) based on the ‘censored’ network described in the text, arising from the censoring of the entire North American ITRDB data set and the ‘St. Anne’ Northern Treeline series from the predictor network prior to AD 1600. As MM censored the MBH98 dataset primarily prior to AD 1600, a suitable approximation to the ’stepwise’ MM reconstruction is provided by a splice of the yellow curve from AD 1400-1600 with the actual MBH98 reconstruction (blue) from AD 1600-1971. The resulting series is shown smoothed on a 40 year timescale (thick orange). 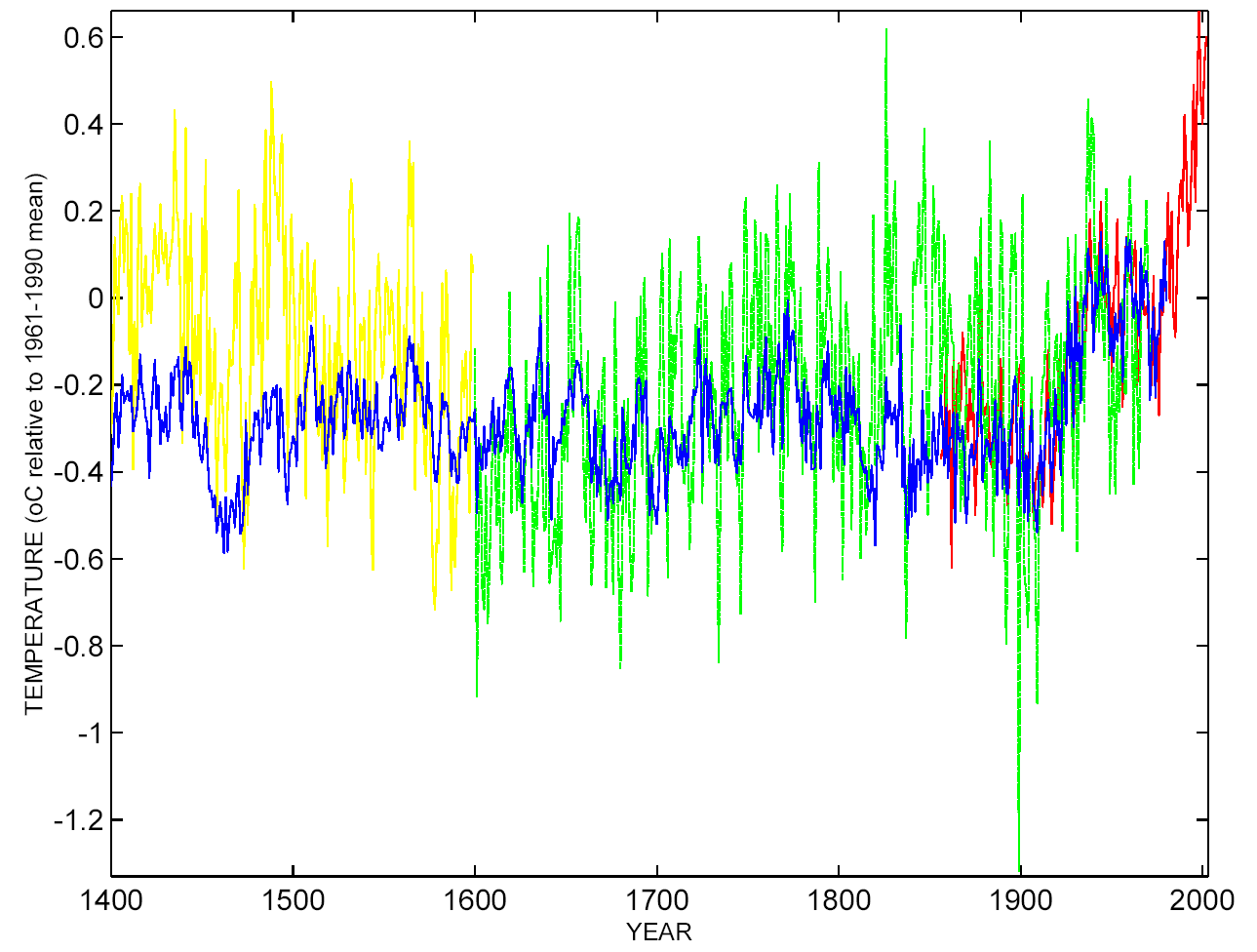 FIGURE 5. Comparison as in Figure 4, but showing the continuation of our reproduction of the MM reconstruction (based on their ‘censored’ version of the MBH98 network discussed in the text) through the end of the calibration interval (green curve). The full instrumental Northern Hemisphere temperature record (1856-2003) is shown for comparison. The failure of the MM reconstruction to verify against independent instrumental temperature is evident from the extreme discrepancy in variance between the green and red series during the 1854-1901 verification interval.