You are here: Home / Climate Science / Recent Warming But No Trend in Galactic Cosmic Rays

Svensmark’s failure to comment on the lack of a clear and significant long-term downward GCR trend, and how changes in GCR can explain a global warming without containing such a trend, is one major weakness of his argument that GCR is responsible for recent global warming. This issue is discussed in detail in Benestad (2002). Moreover, the lack of trend in GCR is also consistent with little long-term change in other solar proxies, such as sunspot number and the solar cycle length, since the 1960s, when the most recent warming started.

The fact that there is little recent trend in the GCR and solar activity does not mean that solar activity is unimportant for earth’s climate. There are a large number of recent peer-reviewed scientific publications demonstrating how solar activity can affect our climate (Benestad, 2002), such as how changes in the UV radiation following the solar activity affect the stratospheric ozone concentrations (1999) and how earth’s temperatures respond to changes in the total solar irradiance (Meehl, 2003). Furthermore, the lack of trend in GCR does not falsify the mechanism proposed by Svensmark, i.e. that GCR act as a trigger for cloud condensation nuclei and are related to the amount of low clouds. As for this latter issue, the jury is still out. 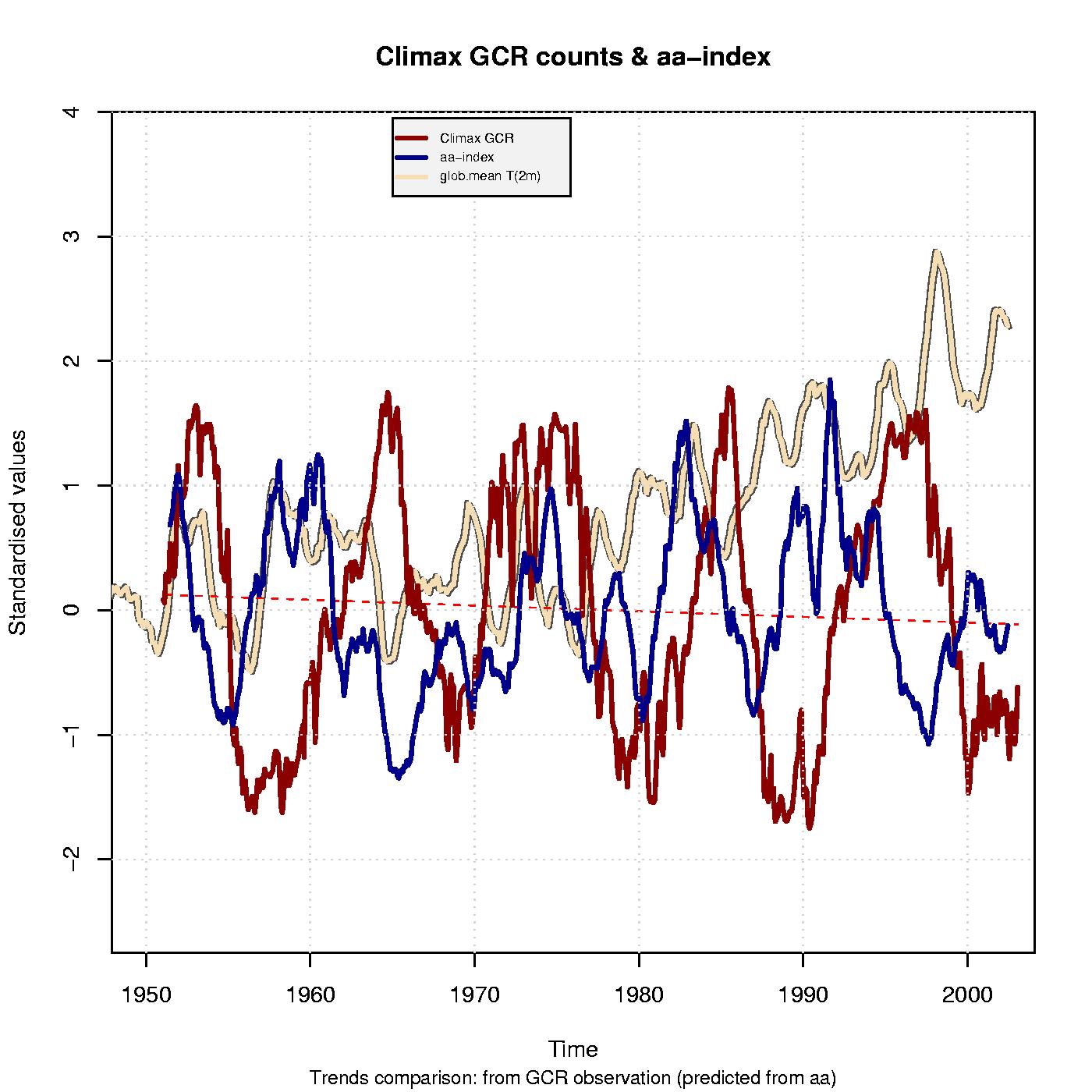 FIGURE 1. GCR counts from Climax (red) and the aa-index (blue). The straight lines show the best linear-fit against time estimated through linear regression. The GCR measurements are shown in solid black line, from which a trend of -180 +/- 253 counts/decade is estimated, and this is associated with a p-value (the probability of this being different to the null-hypothesis: zero trend) of 0.477 (not statistically significant at the 5% level). The aa-index is represented by the blue line, and the corresponding trend of 1.5 +/- 0.4/decade is associated with a p-value of 0.0002 (highly statistically significant). A regression analysis points to a clear link between GCR and the aa-index, and the analysis of variance yields R2 = 0.1466 and the p-value= 0. The yellow line shows the global mean temperature from CRU for comparison. [Data source: http://ulysses.uchicago.edu/NeutronMonitor/neutron_mon.html” , “http://www.cru.uea.ac.uk/cru/data/temperature/” and “ftp://ftp.ngdc.noaa.gov/STP/SOLAR_DATA’].

Friis-Christensen, E. and K. Lassen (1991), Length of the solar cycle: an indicator of solar activity closely associated with climate, Science 254: 698-700