You are here: Home / Climate Science / Was the record Amazon drought caused by warm seas?

On December 11, 2005, The New York Times ran a story on record drought conditions in the Amazonas region of Brasil, linking it to global warming, and specifically the warm ocean temperatures in the North Atlantic that have also been linked to the ferocity of the 2005 Atlantic hurricane season. This prompted a response from Chris Mooney, calling for a comment from RealClimate about whether such an assertion is valid, as we earlier made it very clear that it is impossible to say whether one single extreme event in a very noisy environment – such as Hurricane Katrina – is related to climate change. So we decided to take a look at this phenomena, and address why there might be a connection and what it takes to make an attribution.

The background to this story is that the annual northward-soutward migration of the Inter Tropical Convergence Zone (ITCZ) is related to the north-south sea surface temperature (SST) gradients. The ITCZ tends to follow the peak summer sun with rainy seasons where the sun is directly overhead in the tropics and dry seasons otherwise. The ITCZ is not, however, perfectly symmetrical about the equator because, especially in the Atlantic, the northwards cross-equatorial transport of heat means that the maximum SSTs are shifted towards the north.

The rain is associated with deep convection caused by the peak in received visible sunlight and the underlying temperatures. It is important to keep in mind that the magnitude of the Atlantic convection may be linked with both Walker circulation and the ITCZ. The Walker Circulation is connected with the El Nino Southern Oscillation (ENSO) phenomenon. The rainfall over the Nordeste region has shown some associations with ENSO. There is a good deal of confidence in this link between ENSO and rainfall over northeastern Brazil, since this empirical relationship also appears to be supported by model studies. The wettest months in the Amazon region is December-February, whereas the June–November months are relatively dry.

Updated rainfall deficits for a number of location in northeastern Brazil can be found from the US Climate Prediction Center. The deficit of rain can be seen on on the CPC web pages of NCEP, who also provide maps showing the regional extent of the drought (Note: these data have not yet been quality checked!). These regions don’t appear to coincide with the drought conditions that have been reported unfortunately, which are more concentrated to the south and west of Manaus (up the Madiera river, Acre province (on the border with Peru) etc.). However, more to the east, the deficit in Maraba was mainly caused by the failure of the March–May rains.

The attribution of any event to a cause (whether it is global warming or a long term natural cycle or a recurring phenomena like El Nino) simply relies on a probabilistic argument – what is the probablity of such an event occuring in the absence of the supposed cause (P0), and how much more likely is it with the cause present (P). The attribution (in percent) is then 100*(1-P0/P) 100*(1-P/P0) (see this preprint for more details). However, the estimates of the probability are affected both by statistical sampling for recurring events, and by the lack of an identical planet without global warming to act as a control for the climate change case. So these probabilities often have to be estimated from a model. These problems mean that attributions can change as models get better, or when statistics get more significant.

In the case of a single event like Katrina, the noise in the system precludes any meangingful statement about the probabilities, although for the European heat wave in 2003 the signal was so strong, and the modelling good enough for an attribution of about 50% to human-related climate change (that is, such an event is estimated to have been twice as likely to have happened in the presence of global warming than otherwise) (Stott et al, 2004).

The signal-to-noise ratio improves when there are many events and we see a new pattern emerging, although changes always start with one first event. Thus, if we see more new record droughts following in rapid succession, then this unusual event might be more attributable. However, one should not forget the possibility that extreme events may be clustered in time, for instance if they are modulated by some slowly undulating external factor. These are factors that must go into estimating the background probability of any events. 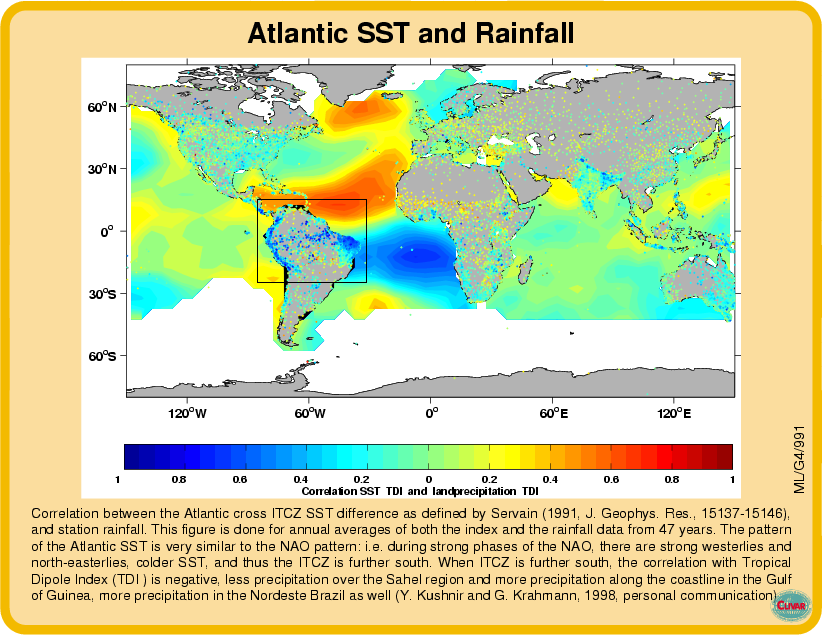 Going back to the situation in the Amazonas region, it is often possible to attribute part of local rainfall variability to large-scale conditions, such as the general circulation or SST (similarly, the correlation for Carauar and S. Gab. do Cachoeira yield negative values for SST in the northern Tropical Atlantic while Manaus yields positive values in the south tropical Atlantic). This can be done through statistical analysis, such as correlation or regression as long as there is good empirical data is available. Thus, if there is a change in the large-scale conditions, then we can infer some of the local consequences. This can also be done using high-resolution nested local area models for a particular region. The former is known as ‘statistical’ or ’empirical’ downscaling whereas the latter is known as ‘dynamical’ or ‘numerical’ downscaling.

The links between the varying SST gradients and the rainfall anomalies is well known, and shows up as an effect in the Amazonas region. Since it is the SST gradients that are important, this shows up in the correlation maps as a dipole in the tropical Atlantic. For most of the northeast Brazil, the annual rainfall is, according to these results, negatively correlated with the SST in the Carribean and the tropical north Atlantic, and positively correlated with SST in the southern tropical Atlantic. Others have also found that the correlation between SST and rainfall variations varies with time of the year.

The correlation pattern varies seasonally as would be expected. However, since the wet season is in December-February and the rain deficit first accumulated over the first months of 2005, it is not really the high SSTs in June-November (potentially associated with the anomalous hurricane season) that are most responsible for the drought, but more likely a combination of high northern spring SST and weak SST anomalies in the tropical southern Atlantic. 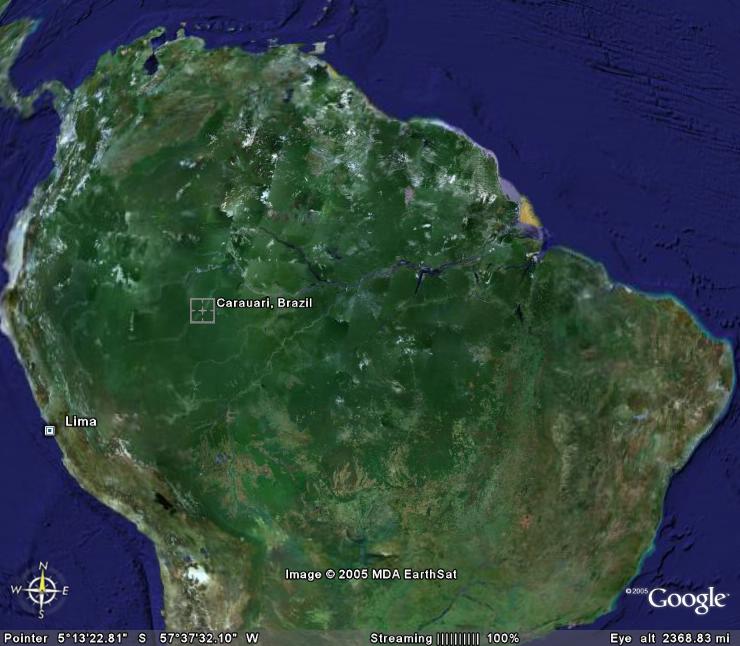 A quick statistical analysis suggests that SST variability cannot account for all of the precipitation anomaly over the Amazon (R2 ~ 20% over the Amazon region, e.g. Carauar, Manaus, & S.Gab. do Cachoeira for the January-November rainfall). Furthermore, the present SST-based regression models do not give a large reduction in rainfall for 2005. It is important to keep in mind that more than one factor (e.g. ENSO, local effects) may affect the rainfall, and extreme events can arise when several conditions coincide in time and space (e.g. a combination of favourable SST anomalies, atmospheric circulation, local effects, etc).

Note that some extreme events, such as storms, can in principle be predicted (and often are) from the large-scale conditions by imposing the large scale conditions onto regional high-resolution models (dynamical downscaling) – this makes it possible for us to predict storms with ordinary weather models or hurricanes with hurricane models. But it is harder to attribute one particular large-scale feature to climate change. The issue here is that there isn’t one class of phenomena that can never be predicted, and one class that can, but that our ability to attribute any event (or series of events etc.) depends upon how much ‘weather’ noise there is compared to the forced signal. Estimating the size of the signal can be done with models or statistics, and the ratio of signal to noise plus how much of change in signal can be attributed to some large scale feature (like global warming) gives a percentage attribution.

In summary, it does not appear possible to say that this single event is attributable to climate change as the noise in the rainfall statistics is large. Here the question has been on attributing the drought to an enhanced greenhouse effect, as opposed to the study of the Euopean heat wave, where the link between increased risk of similar extremely hot 2003 European summers and a global warming was estimated; Stott et al, 2004 acknowledge that ‘It is an illposed question whether the 2003 heatwave was caused, in a simple deterministic sense, by a modification of the external influences on climate ‘ . Past studies have shown that rainfall anomalies over the Amazon basin can be associated with SST changes in the Atlantic, but that these SSTs can only account for part of the picture. Hence, the record drought itself likely cannot be solely attributed to the specific 2005 SSTs in the Carribean/Atlantic basin, although high SST nevertheless are likely to have some effect on the rainfall statistics. It may be that better data or more detailed modelling could change this picture though… but that’s a little beyond the scope of a blog posting.

20 Responses to "Was the record Amazon drought caused by warm seas?"