You are here: Home / Climate Science / When the mites go up…

Guest Commentary from Andy Baker, U. of Birmingham

It doesn’t seem obvious really. Going underground into caves, removing stalagmites and analysing their isotopic composition isn’t the first thing you would do to look for past climate information. But for nearly 40 years, there has been an active, and growing research community that investigates the climate records preserved in these archives. Stalagmites have recently received high profile use in climate reconstructions, for example records from China and Norway have featured in Moberg’s last millennium temperature reconstruction; in a northern hemisphere temperature reconstruction of the last 500 years and even been debated here on RealClimate. So it seems timely to review why on (or even under) earth should research go underground to look at surface climate. 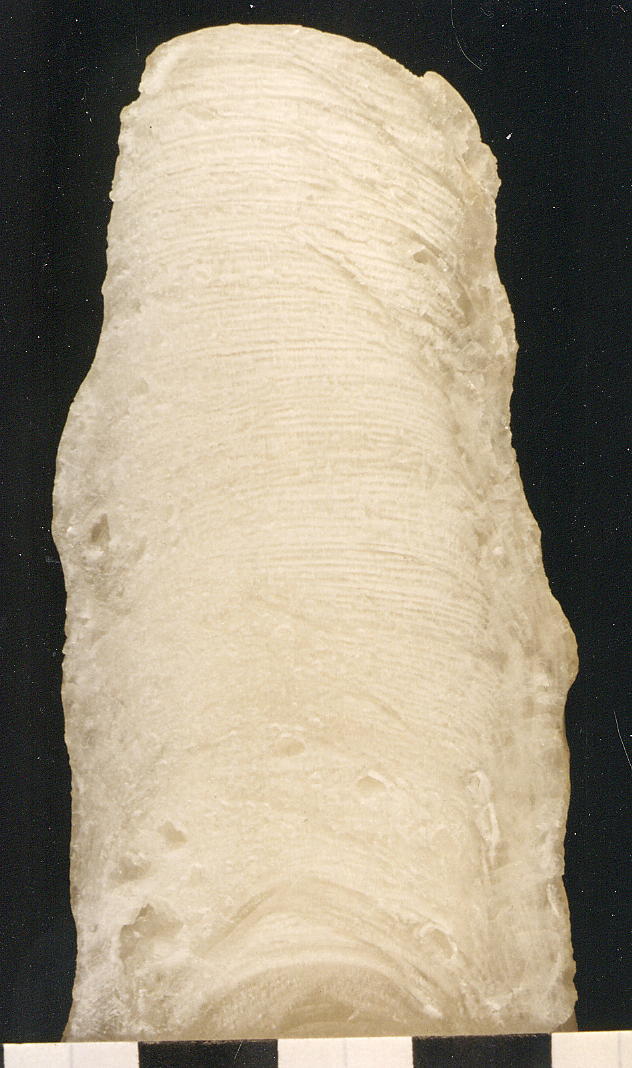 To do that, we need briefly to explain how stalagmites are formed. Most simplistically, to grow a stalagmite you need water, and that water has to be saturated with carbon dioxide. Then this water drips from a cave roof, the carbon dioxide in the water will ‘degas’ into the atmosphere, and as part of that process calcium carbonate will form, which will form a stalagmite. Both the presence of water, and the fact that the water is saturated with carbon dioxide, can provide information about the surface climate. The water was, at one time in the past, surface rain or snow, and should contain information about that rain or snow through the composition of its isotopes. And the carbon dioxide saturation comes, not from the atmosphere, but the soil above the cave. Soil carbon dioxide concentrations are orders of magnitude greater than atmospheric, and there is a complex relationship between the concentration of soil carbon dioxide in cave drip waters, temperature and soil moisture.

Thus there could be some climate signal preserved within stalagmites, the question is how to decode it. The surface rain will interact with the surface soil and vegetation, which may alter any climate signal containing in the rainwater, or create new soil derived signals, or probably a mixture of the two. After a period of time that will depend on climate, seasonality, vegetation, etc. the water will reach the ground water. In the ground water, it will probably mix with waters of differing ages, smoothing any climate signal it contains. The nature of ground water flow may also introduce non-linearities into the signal. The simplest example is the overflowing bath scenario – imagine that filling your bath up at an increasing rate represents increasing rainfall, and that the bath is your groundwater store, and the plughole and the overflow are the outlets feeding stalagmites. The plughole stalagmite will respond first to the rainfall, the overflow stalagmite will be delayed untill the bath is full. As the bath fills and the storage time increases, the plughole stalagmite will preserve an increasingly smoothed water signal.

Therefore, it is a complex system. Over the last 40 years of stalagmite palaeoclimatology, the bulk of the research community was interested in the timescales of ice ages, as one of the big advantages of working with stalagmites is that they can be dated by the natural decay of uranium and thorium isotopes back to around 500,000 years. Over those timescales and temperature changes of 10°C or more, stalagmites are pretty convincing at recording the 1st order climate changes (e.g. glacial-interglacial changes, Dansgaard-Oeschger events, etc..) as the climate signal is much greater than the noise induced in the soil/vegetation-groundwater-cave system, and several papers a year can be read in journals such as Science and Nature (in particular, the Hulu cave record was truly exceptional).

Over the last 10 years or so, with increased interest in climate change and climate variability over the last millennium, researchers have started to use stalagmites to look at the more recent past and at higher time resolution. This is despite the climate signal being much smaller (e.g. changes in temperature of less than 1 °C over the last 1000 years) yet the same level of noise in the soil/vegetation-groundwater-cave system. So this is a much harder task, requiring careful sample and site selection. Given the complexity of the signal transfer from the surface to the cave, the only approach is to: (1) work with stalagmites that were actively growing when sampled (so we know the precise age of the top of the archive, and that they were deposited over the period of instrumental rainfall and temperature data), (2) that we use stalagmites which have annual growth rings (in the same manner as tree rings, many stalagmites have annual rings too) so that a precise chronology can be obtained, and then (3) to analyse whichever proxy we are interested in at highest resolution possible to be able to calibrate that proxy against instrumental climate records over the period they exist. If that methodology sounds familiar, then it is because it is very similar to that used with other proxy climate records such as tree rings. The figure (from Proctor et al, 2000) shows an example of that kind of calibration – in that case against regional sea surface temperature records. 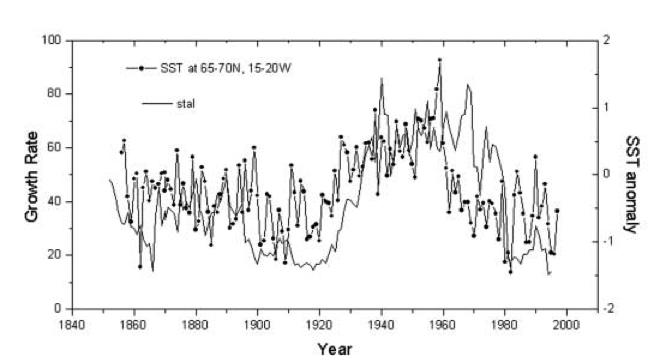 Some caveats are now needed. Firstly, all three points listed above have to be fulfilled – any two of the three just won’t give the precision in terms of chronology or climate calibration necessary to inform the past climate variability debate (a problem with the Norwegian record that featured in Moberg et al is that it failed all three tests). Secondly, depending on the local site, some stalagmites just won’t record high frequency (e.g. annual) climate variability – that signal could be lost if waters are mixed in with a large reservoir of ground water. But they may be excellent at recording the low frequency (decadal to centennial) climate signal, something that proxies such as tree rings have more of a struggle to do. Thirdly, it is quite possible that stalagmites will have a seasonally biased climate signal. For example, if the cave climate varies seasonally such that stalagmite deposition only occurs for part of the year, or if the rainfall only comes during the wet season, then it can only record that season’s conditions.

Stalagmites are sure to feature in forthcoming reconstructions of climate over the last millennium, as the best samples can form continuously for thousands of years, sometimes with continuous annual growth rings, and with little or no growth related trends, all of which are good conditions for preserving low frequency climate variability. But the complexity of the climate transfer function means that the three tests of chronology and calibration need to be fulfilled for any stalagmite record to be demonstrated to be both accurate and precise enough to be used in a proxy climate reconstruction of the last 1000 years.