At Jim Hansen’s now famous congressional testimony given in the hot summer of 1988, he showed GISS model projections of continued global warming assuming further increases in human produced greenhouse gases. This was one of the earliest transient climate model experiments and so rightly gets a fair bit of attention when the reliability of model projections are discussed. There have however been an awful lot of mis-statements over the years – some based on pure dishonesty, some based on simple confusion. Hansen himself (and, for full disclosure, my boss), revisited those simulations in a paper last year, where he showed a rather impressive match between the recently observed data and the model projections. But how impressive is this really? and what can be concluded from the subsequent years of observations?

In the original 1988 paper, three different scenarios were used A, B, and C. They consisted of hypothesised future concentrations of the main greenhouse gases – CO2, CH4, CFCs etc. together with a few scattered volcanic eruptions. The details varied for each scenario, but the net effect of all the changes was that Scenario A assumed exponential growth in forcings, Scenario B was roughly a linear increase in forcings, and Scenario C was similar to B, but had close to constant forcings from 2000 onwards. Scenario B and C had an ‘El Chichon’ sized volcanic eruption in 1995. Essentially, a high, middle and low estimate were chosen to bracket the set of possibilities. Hansen specifically stated that he thought the middle scenario (B) the “most plausible”.

These experiments were started from a control run with 1959 conditions and used observed greenhouse gas forcings up until 1984, and projections subsequently (NB. Scenario A had a slightly larger ‘observed’ forcing change to account for a small uncertainty in the minor CFCs). It should also be noted that these experiments were single realisations. Nowadays we would use an ensemble of runs with slightly perturbed initial conditions (usually a different ocean state) in order to average over ‘weather noise’ and extract the ‘forced’ signal. In the absence of an ensemble, this forced signal will be clearest in the long term trend.

How can we tell how successful the projections were?

Firstly, since the projected forcings started in 1984, that should be the starting year for any analysis, giving us just over two decades of comparison with the real world. The delay between the projections and the publication is a reflection of the time needed to gather the necessary data, churn through the model experiments and get results ready for publication. If the analysis uses earlier data i.e. 1959, it will be affected by the ‘cold start’ problem -i.e. the model is starting with a radiative balance that real world was not in. After a decade or so that is less important. Secondly, we need to address two questions – how accurate were the scenarios and how accurate were the modelled impacts. 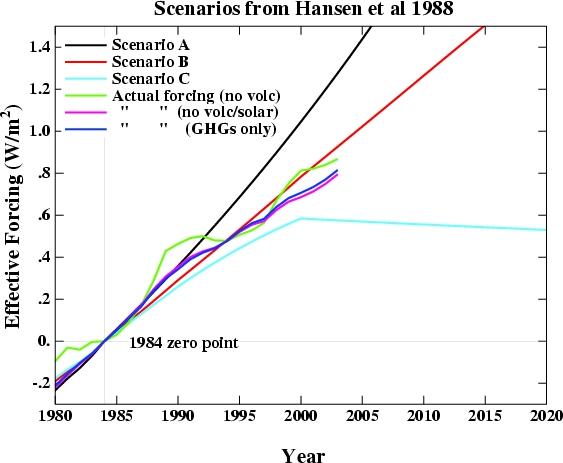 So which forcing scenario came closest to the real world? Given that we’re mainly looking at the global mean surface temperature anomaly, the most appropriate comparison is for the net forcings for each scenario. This can be compared with the net forcings that we currently use in our 20th Century simulations based on the best estimates and observations of what actually happened (through to 2003). There is a minor technical detail which has to do with the ‘efficacies’ of various forcings – our current forcing estimates are weighted by the efficacies calculated in the GCM and reported here. These weight CH4, N2O and CFCs a little higher (factors of 1.1, 1.04 and 1.32, respectively) than the raw IPCC (2001) estimate would give.

The results are shown in the figure. I have deliberately not included the volcanic forcing in either the observed or projected values since that is a random element – scenarios B and C didn’t do badly since Pinatubo went off in 1991, rather than the assumed 1995 – but getting volcanic eruptions right is not the main point here. I show three variations of the ‘observed’ forcings – the first which includes all the forcings (except volcanic) i.e. including solar, aerosol effects, ozone and the like, many aspects of which were not as clearly understood in 1984. For comparison, I also show the forcings without solar effects (to demonstrate the relatively unimportant role solar plays on these timescales), and one which just includes the forcing from the well-mixed greenhouse gases. The last is probably the best one to compare to the scenarios, since they only consisted of projections of the WM-GHGs. All of the forcing data has been offset to have a 1984 start point.

Regardless of which variation one chooses, the scenario closest to the observations is clearly Scenario B. The difference in scenario B compared to any of the variations is around 0.1 W/m2 – around a 10% overestimate (compared to > 50% overestimate for scenario A, and a > 25% underestimate for scenario C). The overestimate in B compared to the best estimate of the total forcings is more like 5%. Given the uncertainties in the observed forcings, this is about as good as can be reasonably expected. As an aside, the match without including the efficacy factors is even better. 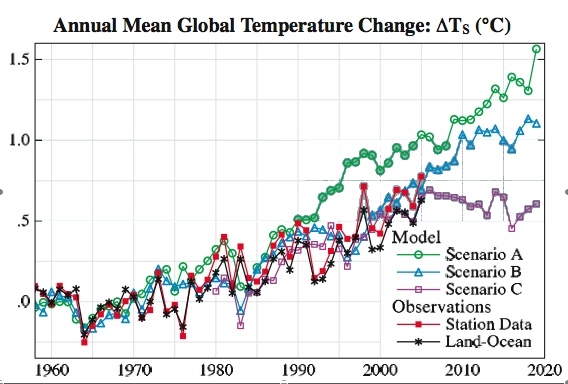 What about the modelled impacts?

Most of the focus has been on the global mean temperature trend in the models and observations (it would certainly be worthwhile to look at some more subtle metrics – rainfall, latitudinal temperature gradients, Hadley circulation etc. but that’s beyond the scope of this post). However, there are a number of subtleties here as well. Firstly, what is the best estimate of the global mean surface air temperature anomaly? GISS produces two estimates – the met station index (which does not cover a lot of the oceans), and a land-ocean index (which uses satellite ocean temperature changes in addition to the met stations). The former is likely to overestimate the true global surface air temperature trend (since the oceans do not warm as fast as the land), while the latter may underestimate the true trend, since the air temperature over the ocean is predicted to rise at a slightly higher rate than the ocean temperature. In Hansen’s 2006 paper, he uses both and suggests the true answer lies in between. For our purposes, you will see it doesn’t matter much.

As mentioned above, with a single realisation, there is going to be an amount of weather noise that has nothing to do with the forcings. In these simulations, this noise component has a standard deviation of around 0.1 deg C in the annual mean. That is, if the models had been run using a slightly different initial condition so that the weather was different, the difference in the two runs’ mean temperature in any one year would have a standard deviation of about 0.14 deg C., but the long term trends would be similar. Thus, comparing specific years is very prone to differences due to the noise, while looking at the trends is more robust.

The bottom line? Scenario B is pretty close and certainly well within the error estimates of the real world changes. And if you factor in the 5 to 10% overestimate of the forcings in a simple way, Scenario B would be right in the middle of the observed trends. It is certainly close enough to provide confidence that the model is capable of matching the global mean temperature rise!

But can we say that this proves the model is correct? Not quite. Look at the difference between Scenario B and C. Despite the large difference in forcings in the later years, the long term trend over that same period is similar. The implication is that over a short period, the weather noise can mask significant differences in the forced component. This version of the model had a climate sensitivity was around 4 deg C for a doubling of CO2. This is a little higher than what would be our best guess (~3 deg C) based on observations, but is within the standard range (2 to 4.5 deg C). Is this 20 year trend sufficient to determine whether the model sensitivity was too high? No. Given the noise level, a trend 75% as large, would still be within the error bars of the observation (i.e. 0.18+/-0.05), assuming the transient trend would scale linearly. Maybe with another 10 years of data, this distinction will be possible. However, a model with a very low sensitivity, say 1 deg C, would have fallen well below the observed trends.

Hansen stated that this comparison was not sufficient for a ‘precise assessment’ of the model simulations and he is of course correct. However, that does not imply that no assessment can be made, or that stated errors in the projections (themselves erroneous) of 100 to 400% can’t be challenged. My assessment is that the model results were as consistent with the real world over this period as could possibly be expected and are therefore a useful demonstration of the model’s consistency with the real world. Thus when asked whether any climate model forecasts ahead of time have proven accurate, this comes as close as you get.

Note: The simulated temperatures, scenarios, effective forcing and actual forcing (up to 2003) can be downloaded. The files (all plain text) should be self-explicable.