Last week, a Norwegian official-looking – and in my view – climatesceptic website praised Eigil Friis-Christensen from the Danish space center (featuring in the Great Global Warming Swindle) and hailed him for having given the best speech ever in the annual Birkeland seminar organized by Norwegian Academy of Science and Letters (NASL). There were rumours of controversy behind the scene before the seminar, as the NASL is regarded as a prestigious body in Norway.

Furthermore, Svensmark and Friis-Christensen have written a response (title ‘Reply to Lockwood and Fröhlich – The persistent role of the Sun in climate forcing’; DNSC Scientific Report Series 3/2007) to a recent paper by Lockwood and Frohlich (LF2007). In this response, they state ’… [LF2007] argue that this historical link between the Sun and climate came to an end about 20 years ago‘. Another quote from their response is ‘Here we rebut their argument comprehensively’. So the cosmic ray theory isn’t quite dead after all?

There are several earlier posts here on RC that provide a background to the story about the galactic cosmic rays (GCR) and our climate (here, here, here, here). There is still no long-term trend in the GCR, not even in the Svensmark and Friis-Christensen’s response (see also figure below). This seems to be acknowledged now.

The LF2007 paper and the response focus on just the last 2-3 decades for which there were direct measurements of the total solar irradiance (TSI= solar energy summed over all wavelength), but if they had read my paper on this issue in GRL 2005, they would have seen that there has not been any trend in solar activity or GCR since 1952 (also seen in the figure below).

In addition, there is no evidence of any long-term trend in the low cloud cover (IPCC AR4), and the GCR-hypothesis has a problem with explaining the trend in the diurnal cycle, enhanced warming in the Arctic and a cooling in the stratosphere. The only explanation we can offer is an enhanced greenhouse effect. 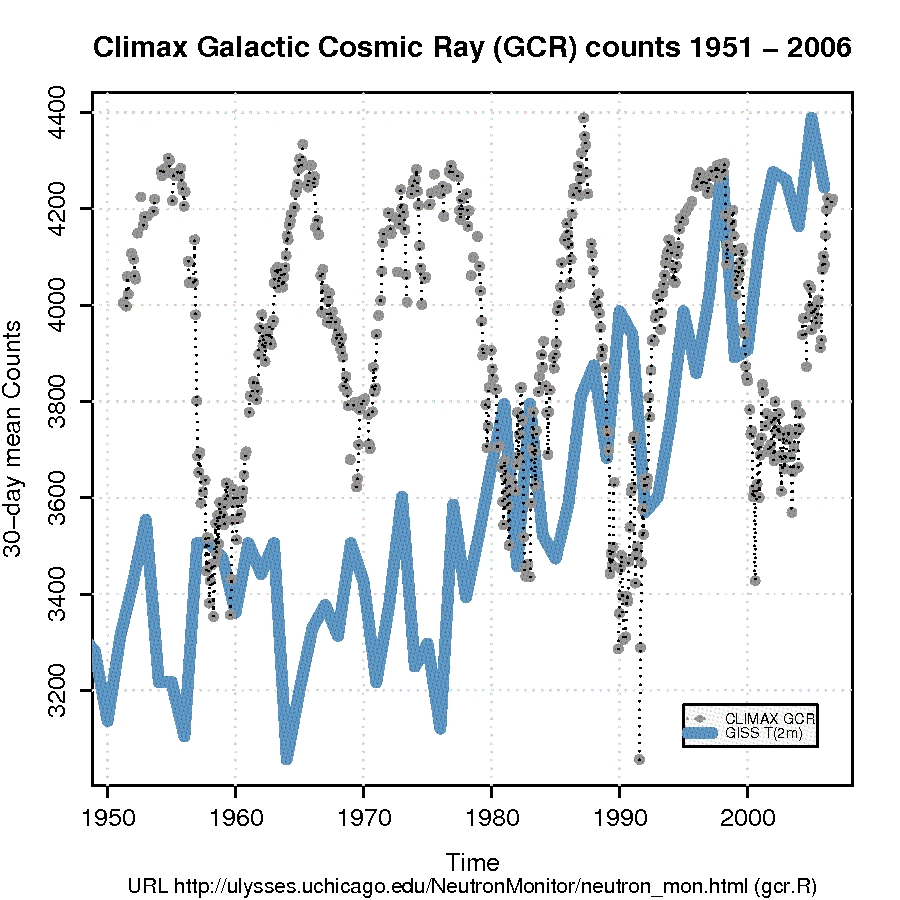 It may be of interest for historians that the story about the GCR has been a long-winded epic (total cloud cover, low clouds, adjustment of ISCCP cloud data, etc.), and now new characters are thrown onto the stage: radiosonde measurements (HadAT2) representing the tropospheric temperatures and data from a ‘simple’ ocean data assimilation (SODA).

SF2007 argue that: ‘When the response of the climate system to the solar cycle is apparent in the troposphere and ocean, but not in the global surface temperature, one can only wonder about the quality of the surface temperature record’. This is a rhetorical question, and not a very scientific one. For starters, one cannot exclude the possibility that near-surface processes dominate at lower altitudes thus degrading any correlation. But, in the mind of Svensmark and Friis-Christensen, it is perhaps the GCR that is the most dominant driver.

Svensmark and Friis-Christensen do not disclose the geographical coverage of the ocean temperature they use to correlate with GCR, but the strong annual cycle and inter-annual variations are typical characteristics of local observations rather than global fluctuations. Note, the global surface temperature includes the world oceans (~70%) of the surface.

Another interesting aspect is the improved correlation with altitude. This is not what one would expect to see if the GCR mechanism played a key role, as changes in cloudiness would affect the planetary albedo, and hence the solar energy absorbed by the surface. The troposphere would then respond to the surface changes.

A more likely explanation could be that changes in UV associated with the solar cycle affects the stratosphere (a little disputed hypothesis), and that the signal then propagates down into the troposphere. Thus, we cannot rule out that solar activity influences our climate in ways that do not involve GCR and clouds.

The physical link between any ultra-small particles and much larger the cloud condensation nuclei is still lacking, even after the experiment performed in Copenhagen. Thus, the hypothesis is still speculative. The GHG-effect, on the other hand, is well-established.

According to the official looking Norwegian climatesceptic website, Friis-Christensen states that his work has been controversial, but mainly because of political and not scientific reasons. The fact that he and Svensmark now offer a response to LF2007 seems to contradict his own belief.

Svensmark and Friis-Christensen further argue ‘In any case, the most recent global temperature trend is close to zero’. This is not true, as the IPCC AR4 highlights. I think the the statements in their response ‘use of a long running mean creates the illusion that the temperatures are still rising rapidly early in the 21st Century’ and ‘global surface temperatures have been roughly flat since 1998’ are dishonest (see figure above ).

Svensmark and Friis-Christensen should know of the chaotic nature of our climate system and the fact that it takes more than a few years to determine whether there is a trend or a pause in the trend. The most convincing explanation is that there are also many factors (such as aerosols) playing a role, adding to inter-annual and inter-decadal variations.

It is worrying that the director of the Danish space center makes such misleading claims and then receives honours in Norway by NASL. The controversy running up to the event was therefore understandable, even though Friis-Christensen was supposed to talk about geomagnetism rather than climate.

To answer the question I posed in the beginning of this post, I think that the chapter on the connection between GCR and clouds is not yet closed, but all the evidence goes against the notion that GCR are the cause of the present global warming.