The authors use a couple of coral records and a marine sediment core from the Caribbean to reconstruct first wind shear and then major hurricane activity in the tropical Atlantic. First they find a good correlation of their proxy records to wind shear measurements in the mean hurricane development region (MDR). There are two interesting features here: the coral proxies show a negative correlation to wind shear over the MDR, but a positive correlation north of it. Thus, in relation to hurricane activity there is an opposite effect of wind shear in different regions (Fig. 2 of Nyberg et al.). We’ll come back to that later. The sediment proxy shows a positive correlation to wind shear over the MDR and no correlation north of it. Thus, since the two proxy records are correlated to wind shear in the opposite direction, one would expect that the proxies show opposite patterns and trends. This is more or less true for the period 1950-1990 used to calibrate (or ‘train’) the statistical model. However, for the preceding 230 years, the long-term trend is the same for both proxies. This clearly indicates, that at least one of the proxies has a wrong long-term trend, because they show an opposite long-term trend of wind shear. Thus the long-term trend of a reconstruction using both proxies does not seem very reliable. Nyberg et al. did not comment on this basic problem in their reply (Nyberg et al. 2008).

For the reconstruction of past major hurricane activity they use these two proxies again together with a proxy for SSTs. Besides the problem of two proxies with opposite long-term trend, the coral proxy has, as mentioned, an opposite correlation to wind shear within and outside the MDR. Since 1944 about 50% of major Atlantic hurricanes have reached major hurricane strength only outside the area of positive correlation (in the area north of 20ºN between 50 to 75ºW and north of 25ºN outside this section), i.e. in an area with no or an inverse correlation to the proxies. Since wind shear seems to be high in this area at times when it is low in the MDR, the relation of major Atlantic hurricane frequency to the coral proxy does not seem so evident from physical considerations. Moreover, the fraction of major hurricanes observed outside the MDR varies with time (Figure 1) and might have changed over the last decade, which further complicates the relationship. 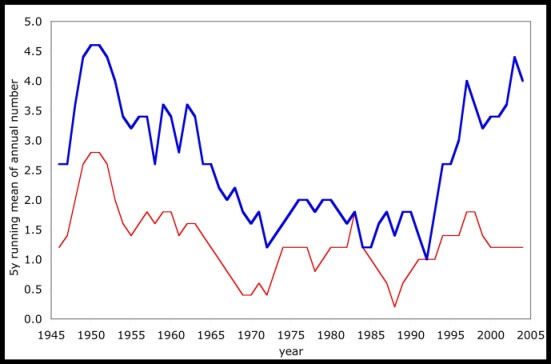 Although the correlation patterns presented by Nyberg et al. suggest a good correlation of their Caribbean proxies to wind shear over a large part of the Northern tropical Atlantic, this does not mean automatically that the correlation of the proxies to total Atlantic major hurricane activity is representative for the whole Atlantic as well. Firstly, hurricane activity is influenced by other factors than wind shear (which might vary over different areas), and secondly the effect of wind shear evidently is opposite in different regions.

There is a correlation of the proxies to major Atlantic hurricane activity over the period 1946-1995, however, the large activity increase already starts more than 5 years earlier in the proxies than in the hurricane record. The authors explain this time lag by the El Niño in the early 1990ies, however, since the influence of El Niño partly works over wind shear, this influence should be already included in the proxies.

Neither the reconstruction nor the calibration period covers the strong increase in major hurricane activity in the 1990ies, but it is obvious from observed wind shear, and recognized by the authors, that this increase cannot be explained by wind shear and is probably due to the increase in SSTs as several studies have pointed out (e.g. Hoyos et al. 2006). Since the training period of their reconstruction model covers a phase, where the main variation of hurricane activity seems to be mostly through wind-shear (1946-1990), but not the following phase, where SST changes are the most important factor, the model probably does not represent the influence of SSTs very well.

Now we come back to the question of the reliability of the hurricane record. One of the big problems of the Nyberg et al. reconstruction is, that it is far off the hurricane record before 1944 (Figure 3 in Nyberg et al). For the period 1850-1944, the reconstruction shows more than 3 (about 3.3) major hurricanes per year on average, while the hurricane record has less than 1.5 per year. Nyberg et al (2007) explain this discrepancy by the unreliability of the hurricane record. This explanation seems too simple. There are, as discussed above, uncertainties in the hurricane record. These are, however, not infinitely large. I have tried to estimate an upper error bar for major hurricane activity. Since there are no estimations of underreporting biases of major hurricanes, I assumed a constant proportion of major hurricanes to total tropical storm number. As Holland and Webster (2007) have shown, this proportion has some multidecadal variation, but these variations are not very large on the 50 year time scale, and there seems to be no significant long-term trend. I used the highest reporting bias estimations of tropical storms by Landsea (2004, 2007) – which are probably too high, as discussed in ‘Tropical cyclone history – Part I’, i.e. 1851-1885 plus 3 tropical storms per year on average; 1885-1965 plus 2; 2003-2006 minus 1; see Figure 2, black line).

Nyberg et al. claim that Landsea suggests 0-6 additional storms per year before 1885 and 0-4 per year before 1900 and thus the ‘upper limit’ correction should be 6 and 4 storms, respectively. However, the range given by Landsea represents the annual variation of the bias, not an uncertainty range of the average (I very much doubt that Landsea thinks a zero correction on average to be possible).

Even if using an extreme correction of plus 5 TCs before 1900, the corrected record does not overlap the error bars given by Nyberg et al (2007). Or, looking the other way round, to get major hurricane frequency as shown by the reconstruction, the observational bias prior to 1900 would have to be in the order of 10 tropical storms per year on average, which is not very likely.

In summary, there are serious doubts about the representativeness of the proxies used by Nyberg et al., and there is a clear mismatch of reconstruction and earlier observation. Therefore the conclusions drawn in that paper are on very weak ground.

Well, what can we conclude from the discussion: Paleo-tempestology is a brand new field of study and there is undoubtedly a long way to go before the reconstruction of extreme events (like hurricanes) in the past will be anything more than suggestive. However, there’s a lot more data out there waiting to be collected and analysed.