You are here: Home / Communicating Climate / Impressions from the European Geophysical Union conference 2008

Last week, the European Geophysical Union held its annual general assembly, with thousands of geophysicists converging on the city of Vienna, Austria. It was time to take the pulse of the geophysical community.

When registering at the conference, we got a packet called ‘Planet Earth; Directions for Use’. As far as I know, this is a new feature apparently offered by the EGU. The box says ‘EGU cares…’ and it contains 4 sheets: Biosphere, Hydrosphere, Litho- and Pedosphere, and the Atmosphere. The Biosphere sheet is concerned about the biodiversity, the hydropshere discusses water shortage and loss of marshland issues, the litho- & pedosphere mentions the fact that fossil fuels are finite and soil erosion, and the atmosphere discusses AGW.

Of course this is a gimmick, and perhaps it is even aimed at the wrong target group. These issues are more or less taken as given by the majority of the EGU community by now, it seems. It’s more pressing, however, that the rest of the world population understand the problems.

Actually, it was refreshing arriving at the harbor of sanity in the EGU meeting, after the the insane climate-change debate circus in Norway at the moment – lead by a number of academics who start to look more and more like crack pots, and a right-wing populist political party taking after Inhofe. 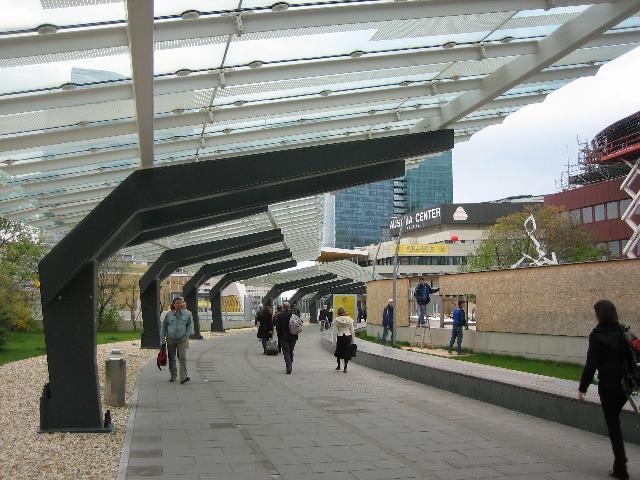 What were the highlights? It’s impossible to cover everything, and I only sampled some talks which are most relevant to my own work. But one important talk was about setting the global climate models’ initial state (ocean) to describe the current climate. The intention was to capture subsequent slow natural variations (decadal variation) associated with the thermohaline circulation (THC, not to be confused with other meanings according to a recent article in Eos: VOLUME 89 NUMBER 11 11 March 2008).

Apparently, if the global climate model is initialized with the current state, then the global mean temperature may not rise much over the next decade or so, and then suddenly bounce up and converge with the current scenarios. But some critiques argue that forcing models to have a prescribed state, will trow them off balance, and that the model will try to recover its balance for the next few model years.

Another presentation discussed the possibility for slow climatic variations to be predicted 10 years in advance (potential decadal predictability), and concluded that there is a potential for over the North Atlantic regions – associated with the THC. But an increasing AGW may destroy this possibility, as the predictability reduces when the world gets warmer.

There are some interesting and newish data coming of age: radio occultation. This involves measuring the bending of GPS signal through the atmospheric limb, as measured between different satellites. The atmospheric temperature and humidity affect radio signals refractive index. But there is only short data series (~10 years), but so far the temperature trends are consistent with the models for similar intervals. But these are independent to the satellite MSU data, and do not suffer in the same way from differences between satellite instruments, etc.

My personal favourite this time was a talk on ‘recurrence based transition analysis’. The presentation was subtly slick and so nicely executed that it can only be done on a Mac. The talk was very clear, no excess number of words, and to the point.

There were many good talks, but some common mistakes. Well, at least I’m a bit slow when having attended a few dozen presentations, so presenters speaking fast or too crowded Powerpoint slides risk losing me. There is supposed to be a golden rule called ‘Seven by seven’: no more than seven bullet points, consisting of no more than 7 words! And one should speak slowly and repeat the important points.

So what did people talk about? What was ‘The buzz-word’? There was no obvious paradigm shift, and I didn’t catch one single theme that was the vogue of the day, but there were some issues that kept popping up: decadal predictability, cryosphere and the polar regions, model ensembles and probabilities, regional modelling and extremes.

What I find striking with such monster conferences is the sheer scale of diversity in terms of geo-subjects that people study. There were rows upon rows of posters in several large rooms, in addition to the talks.

There seems to be a great secret of Powerpointerism: the programmers at Microsoft designed a right mouse click option to show a presentation straight away without showing the subsequent page. There is a systematic neglect of this functionality, so that the Microsoft guys must have implemented this one in vain.

The best quote that i heard on this conference was: ‘A trend is a trend is a trend …’. In other words, there is no definite definition of a trend, at least not to statisticians who like to use more complex lagged correlation models. Something to bear in mind for those who fit linear lines to data points – in order to study trends – and then use the goodness of fit to say whether the trend is ‘significant’ or not.

Another bad habit is showing latitudinal profiles of zonal mean values as if the points at high latitudes are equal to those near the equator. What they really compare are oranges and apples, as the low latitude zonal means involve higher degrees of freedom than at high latitudes. I have explained this in more technical details in a GRL article from 2005, but such graphs can be found even the latest IPCC report. Though it may be a minor point, it makes models look worse than they actually are, as part of the spread towards the poles can be attributed increasing statistical fluctuations when the number of degrees becomes less. Thus, the results would stand stronger taking this aspect into account.

I was pleased to hear that some colleagues in the German weather service sometimes use RealClimate for inspiration to their monthly seminars. What was more unexpected, however, was being met with a slide showing ‘Naturally Trendy?‘ on a session that I had been invited to give a talk.

Furthermore, it turned out that Cohn and Koutsoyiannis, one of them the author of the very paper that I had criticized, sat down next to me. We nevertheless had a very civilized and friendly chat, deciding to disagree on the matter of natural trends.

But Dr. Koutsoyiannis commended us for being respectful in our reply to his comments. I think this is a very important issue – we have to be respectful, sincere, and show courtesy in our criticism, even when we argue why we think that a paper has flaws. This brings us back to the discussion on blogs and journals.

I think that we have built up a reputation only because we deliver relevant quality analysis. We are very much aware that we some day may be mistaken, so it’s important to be humble and check our drafts amongst ourselves. But when a question was asked about the importance of blogs like RealClimate in the session, the answer was that they were good entertainment.

Vienna is a pleasant city with many pretty sights. The only annoying thing is that one often has to breathe in local pollution from the next table when dining in restaurants. Austria is one of the few western European countries that has not introduced a smoking ban in restaurants it seems.

75 Responses to "Impressions from the European Geophysical Union conference 2008"