For global temperature time series we have GISTEMP, NCDC and HadCRUT. Each has worked hard to assimilate global temperature data into reliable and accurate indices of global temperature. The equivalent for alpine glaciers is the World Glacier Monitoring Service’s (WGMS) record of mass balance and terminus behavior. Beginning in 1986, WGMS began to maintain and publish the collection of information on ongoing glacier changes that had begun in 1960 with the Permanent Service on Fluctuations of glaciers. This program in the last 10 years has striven to acquire, publish and verify glacier terminus and mass balance measurement data from alpine glaciers the world over on a timely basis. Spearheaded by Wlfried Haeberli with assistance from Isabelle Roer, Michael Zemp, Martin Hoelzle, at the University of Zurich, their efforts have resulted in the recent publication, “Global Glacier Changes: facts and figures” published jointly with UNEP. This publication summarizes the information collected and submitted by the national correspondents of WGMS portraying the global response of glaciers to climate change, as well as the regional response.

The health of an alpine glacier is typically determined by monitoring the behavior of the terminus and/or its mass balance. Glacier mass balance is the difference between accumulation and ablation (melting and sublimation) and can be altered by climate change caused variations in temperature and snowfall. A glacier with a sustained negative balance is out of equilibrium and will retreat. A glacier with sustained positive balance is out of equilibrium, and will advance to reestablish equilibrium. Glacier advance increases the area of a glacier at lower elevations where ablation is highest, offsetting the increase in accumulation. Glacier retreat results in the loss of the low-elevation region of the glacier. Since higher elevations are cooler, the disappearance of the lowest portion of the glacier reduces total ablation, increasing mass balance and potentially reestablishing equilibrium. If a glacier lacks a consistent accumulation it is in disequilibrium (non-steady state) with climate and will retreat away without a climate change toward cooler wetter conditions (Pelto, 2006; Paul
et al., 2007). 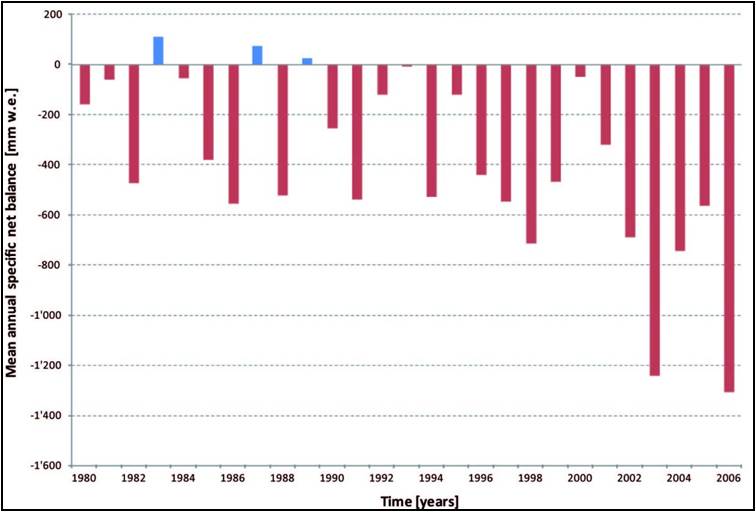 In terms of mass balance two charts indicate the mean annual balance of the WGMS reporting glaciers and the mean cumulative balance of reporting glaciers with more than 30-years of record and of all reporting glaciers. The trends demonstrates why alpine glaciers are currently retreating, mass balances have been significantly and consistently negative. Mass balance is reported in water equivalent thickness changes. A loss of 0.9 m of water equivalent is the same as the loss of 1.0 m of glacier thickness, since ice is less dense than water. The cumulative loss of the last 30 years is the equivalent of cutting a thick slice off of the average glacier. The trend is remarkably consistent from region to region. The figure on the right is the annual glacier mass balance index from the WGMS (if this was business it would be bankrupt by now). The cumulative mass balance index, based on 30 glaciers with 30 years of record and for all glaciers is not appreciably different (the dashed line for subset of 30 reference glaciers, is because not all 30 glaciers have submitted final data for the last few years): 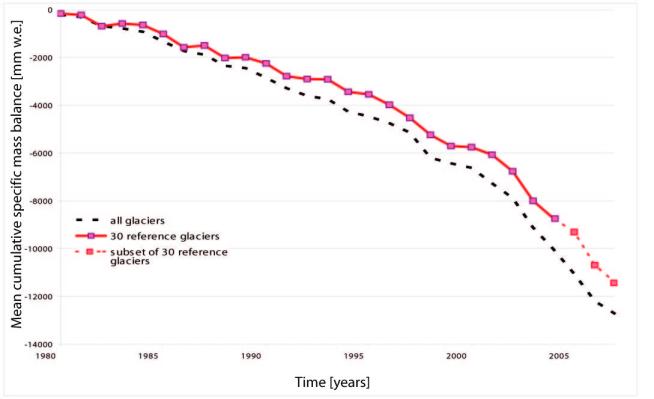 Nor is the graph much different for North America Glaciers individually or collectively. The next figure shows the cumulative annual balance of North American Glaciers reporting to the WGMS with at least 15 years of recor: 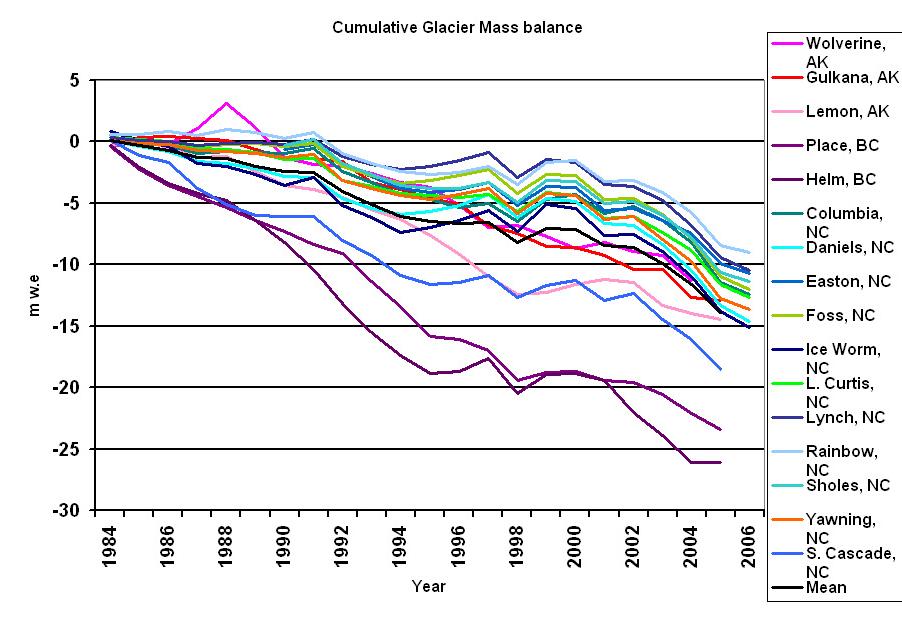 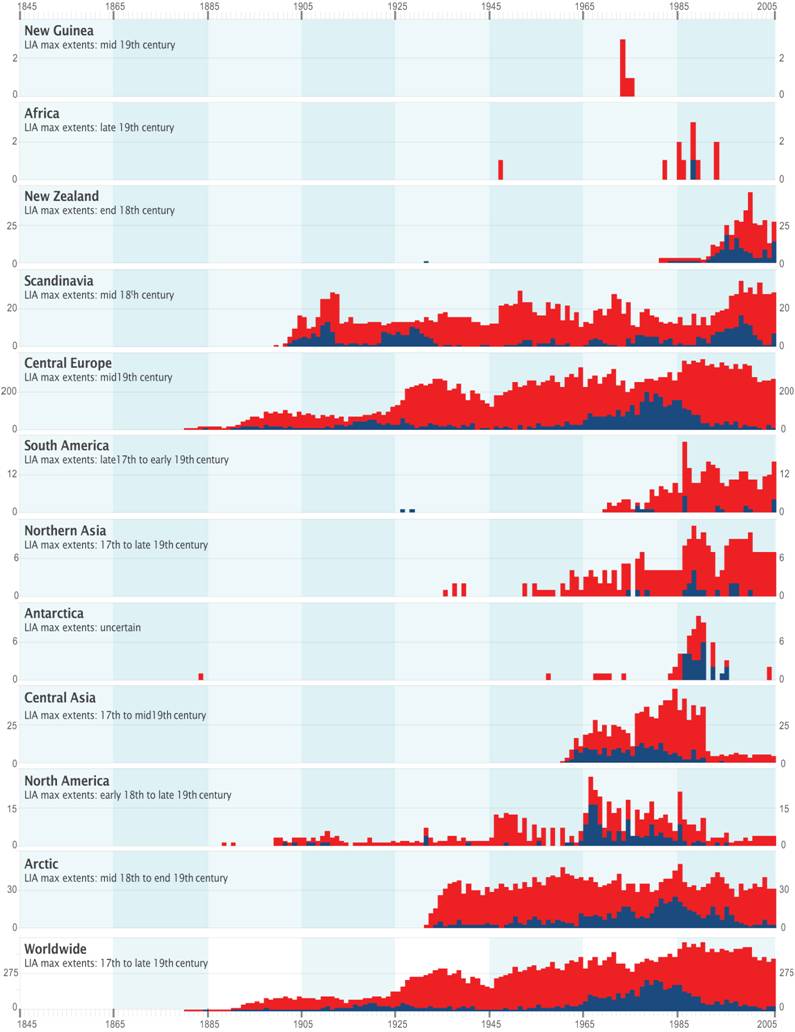 The second parameter reported by WGMS is terminus behavior. The values are generally for glaciers examined annually (many additional glaciers are examined periodically). The population has an over-emphasis on glaciers from the European Alps, but the overall global and regional records are very similar, with the exception of New Zealand. The number of advancing versus retreating glaciers in the diagram below from the WGMS shows a 2005 minimum in the percentage of advancing glaciers in Europe, Asia and North America and Europe. In Asia and Alaska, there have been extensive terminus surveys illustrating long term retreat using satellite image and aerial photographic comparison over longer time spans. Those results indicate that 95% of the glaciers are retreating, but are not fully reflected in the annual terminus retreat data base of the WGMS. In 2005 there were 442 glaciers examined, 26 advancing, 18 stationary and 398 retreating – implying that “only” 90% are retreating. In 2005, for the first time ever, no observed Swiss glaciers advanced. Of the 26 advancing glaciers, 15 were in New Zealand. Overall there has been a substantial volume loss of 11% of New Zealand glaciers from 1975-2005 Salinger et al. ,but the number of advancing glacier is still significant.

That glaciers are shrinking in terms of volume (mass balance) and length (terminus behavior) is not news. What is news is the development of a robust global index of glacier behavior. As a submitter of data to WGMS, I can report that the scrutiny and level of detail requested of the submitted of data is increasing. The degree of participation by glaciologic programs is also increasing. Both are important and will lead to an even better glacier index in the future, with more even representation from around the globe.