You are here: Home / Climate Science / Aerosols / Yet more aerosols: Comment on Shindell and Faluvegi

Our recent paper “Climate response to regional radiative forcing during the twentieth century”, has generated some interesting discussion (some of it very ‘interesting’ indeed). So this post is an attempt to give a better context to the methods and implications of the study.

First, some history. Global model responses to aerosols have been looked at since the early 1990s (Taylor and Penner, 1994; Mitchell et al, 1995, Santer et al, 1995). These studies and subsequent ones have shown that when a forcing is spatially concentrated, the regional climate response does not closely follow the spatial pattern of the forcing. These two figures show an example of that from two recent models (GISS ModelE and GFDL). Despite extremely large localized forcings over the industrialized areas, the climate response is spread out much more broadly in the zonal direction. Similarly, although forcing is extremely large over India and Southeast Asia, those areas show only very weak warming. In particular, the Arctic climate response can be quite different from what the local forcing would imply. 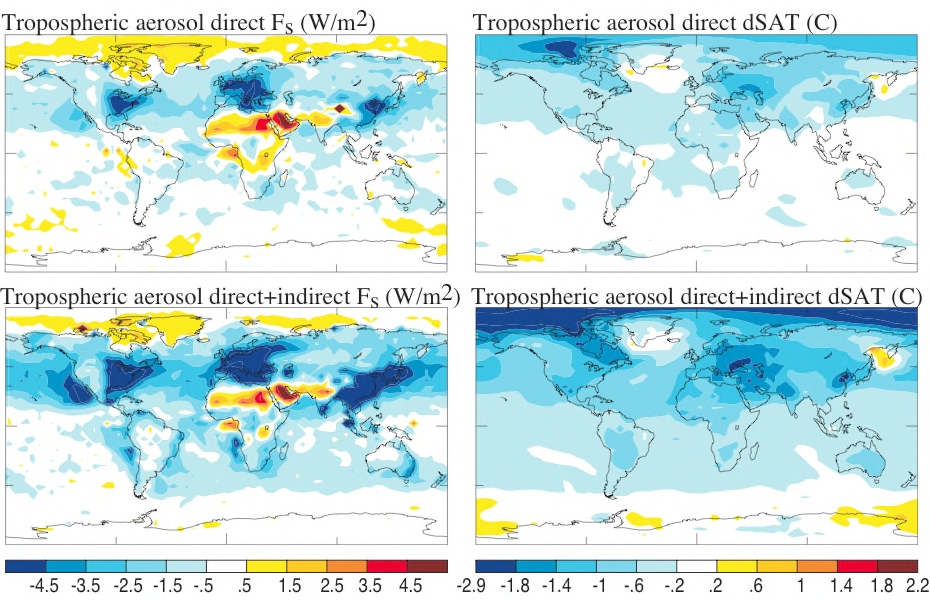 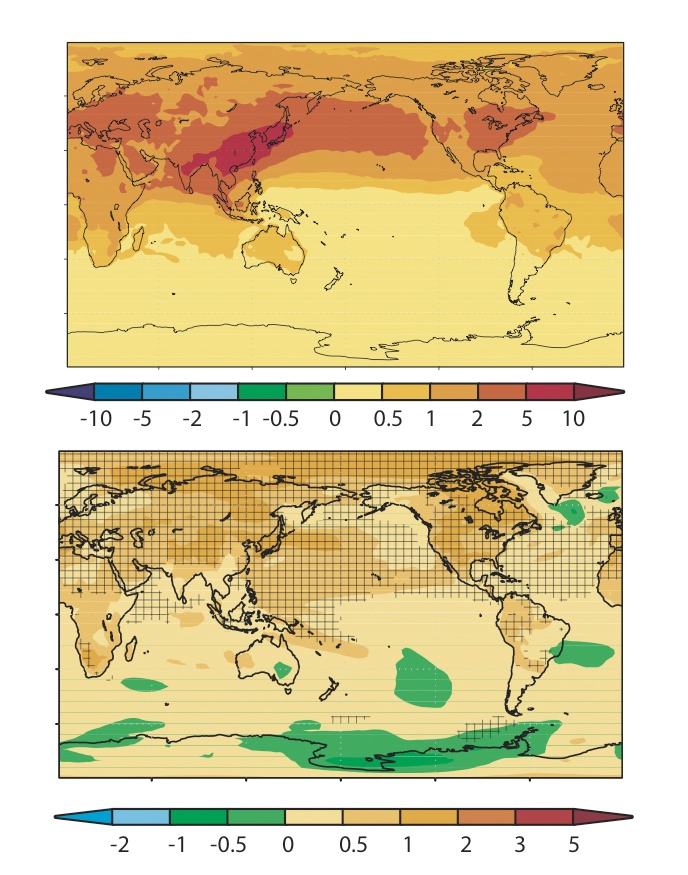 In our paper, we wanted to characterize the geographic forcing/response relationship more clearly. Prior studies had looked at particular scenarios or time periods when forcings were typically changing over much of the world (albeit most strongly in certain regions). So we put idealized forcings from GHGs, aerosols, and ozone in the tropics, mid-latitudes and polar regions to see what would happen. The results showed that the temperature response in the tropics, like the global mean, is only mildly sensitive to the location of forcing. That is, you get an enhanced tropical response to forcing in the Northern Hemisphere extratropics (where you can activate strong positive feedbacks like snow/ice albedo), but the enhancement is only 40-50% over that found with forcings applied elsewhere. In contrast, the extratropical zones are much, much more sensitive to local radiative forcing than to tropical forcing or to forcing in the opposite hemisphere. So to quote from the paper

“global and tropical mean temperature trends during the twentieth century would have been quite similar if short-lived-species radiative forcing had been distributed homogeneously rather than being concentrated in the northern extratropics. Regional concentration of forcing contributed to the departures of Northern Hemisphere mid-latitude and Arctic temperature trends from the global or Southern Hemisphere extratopical means, however.”

We then used the regional forcing/response relationships to derive the aerosol forcing needed to explain the observed global and regional temperature trends. Our results have a substantial uncertainty range which arises primarily from the influence of unforced, internal variability. The global mean preindustrial to present-day aerosol forcing we calculate is -1.31 +- 0.52 W/m2, consistent with the IPCC AR4 range of -0.6 to -2.4 W/m2.

A big uncertainty is still the influence of unforced internal variability, which we estimated from coupled ocean-atmosphere climate runs. Though that contribution is large, it was still not large enough to account for many of the mid-latitude and Arctic temperature trends without including aerosol forcing. For many cases, the influence of aerosols and internal variability were comparable in size. Though the influence of internal variability leads to a substantial uncertainty range in our results, they are nonetheless useful as other techniques of estimating aerosol forcing of climate have comparably large or larger uncertainties. These include ‘forward’ modeling from emissions to concentration to optical properties (e.g. see [Schulz et al., 2006]), and various estimates based at least in part on satellite observations (see this previous post).

Some of the most interesting conclusions of the study include those relating to the Arctic. For example, we estimate that black carbon contributed 0.9 +/- 0.5ºC to 1890-2007 Arctic warming (which has been 1.9ºC total), making BC potentially a very large fraction of the overall warming there. We also estimated that aerosols in total contributed 1.1 +/- 0.8ºC to the 1976-2007 Arctic warming. This latter aerosol contribution to Arctic warming results from both increasing BC and decreasing sulfate, and as both were happening at once their contributions cannot be easily separated (unlike several earlier time periods we analyzed, when one increased while the other remained fairly constant). Though the uncertainty ranges are quite large, it can be useful to remember that the 95% confidence level conventionally used by scientists is not the only criteria that may be of interest. As the total observed Arctic warming during 1976-2007 was 1.5 +/- 0.3ºC, our results can be portrayed in many ways: there is about a 95% chance that aerosols contributed at least 15% to net Arctic warming over the past 3 decades, there is a 50% chance that they contributed about 70% or more, etc.

It’s also worth considering how to interpret the effects of decreasing sulfate during the past 3 decades. To try to make sure that the complex role of aerosols wouldn’t be misunderstood, when referring to the recent warming due to aerosols at Northern Hemisphere mid-latitudes and in the Arctic, we stated in the conclusions of the paper:

“much of this warming may stem from the unintended consequences of clean-air policies that have greatly decreased sulfate precursor emissions from North America and Europe (reducing the sulfate masking of greenhouse warming) and from large increases in Asian black carbon emissions.”

So it is incorrect, or at least quite incomplete, to say that that controls on air pollution such as those created under the Clean Air Act in the US have caused the recent warming. In the absence of increasing greenhouse gases, our large historical emissions of sulfate precursors would have led to substantial cooling from sulfate, and the subsequent reduction in emissions would have brought temperatures back towards their previous level. So reduced sulfate does not cause warming in an absolute sense, only relative warming compared to a time when emissions were larger. Over the mid-20th century, sulfate precursor emissions appear to have been so large that they more then compensated for greenhouse gases, leading to a slight cooling in the Northern Hemisphere. During the last 3 decades, the reduction in sulfate has reversed that cooling, and allowed the effects of greenhouse gases to clearly show. In addition, black carbon aerosols lead to warming, and these have increased during the last 3 decades.

For an analogy, picture a reservoir. Say that around the 1930s, rainfall into the watershed supplying the reservoir began to increase. However, around the same time, a leak developed in the dam. The lake level stayed fairly constant as the rainfall increased at about the same rate the leak grew over the next few decades. Finally, the leak was patched (in the early 70s). Over the next few decades, the lake level increased rapidly. Now, what’s the cause of that increase? Is it fair to say that lake level went up because the leak was fixed? Remember that if the rainfall hadn’t been steadily increasing, then the leak would have led to a drop in lake levels whereas fixing it would have brought the levels back to normal. However, it’s also incomplete to ignore the leak, because then it seems puzzling that the lake levels were flat despite the increased rain during the first few decades and that, were you to compare the increased rain with the lake level rise, you’d find the rise was more rapid during the past three decades than you could explain by the rain changes during that period. You need both factors to understand what happened, as you need both greenhouse gases and aerosols to explain the surface temperature observations (and the situation is more complex than this simple analogy due to the presence of both cooling and warming types of aerosols).

Hence the implication should not be that cleaning up the air causes warming, but that air pollution plays a substantial role in climate, and we can better understand regional climate changes during the past by taking this into account. Economists have argued that inclusion of a broader array of climate forcing agents leads to more cost-effective strategies to mitigate climate change (e.g. [O’Neill, 2003]), so that taking into account the large impact of air pollution and its ancillary effects on human and ecosystem health may also lead to better solutions for climate change.

114 Responses to "Yet more aerosols: Comment on Shindell and Faluvegi"