There was an interesting AP story this week about possible changes in wind speed over the continental US. The study (by Pryor et al (sub.)), put together a lot of observational data, reanalyses (from the weather forecasting models) and regional models, and concluded that there was some evidence for a decrease in wind speeds, particularly in the Eastern US. However, although this trend appeared in the observational data, it isn’t seen in all the reanalyses or regional models, leaving open a possibility that the trend is an artifact of some sort (instrumental changes, urbanization etc.). If the effect is real though, one would want to see whether it could be tied to anything else (such as forcing from greenhouse gas or aerosol increases), and indeed, whether it had any implications for wind-generated electricity, water evaporation etc.

Amusingly, both of us were quoted in the story as having ostensibly conflicting views. Mike was quoted as finding the evidence for a trend reasonably convincing, while Gavin was quoted as being unconvinced of the evidence for an anthropogenic climate change signal (note that the two statements are not in fact mutually inconsistent). As one should expect in any news story, these single lines don’t really do justice to the longer interviews both of us gave the reporter Seth Borenstein. So what is the bigger context?

First some background. It’s important to note that ‘windiness’ is not a globally uniform field, and that changes will occur in different regions for very different reasons. Also, note that mean wind speed is not the same as storminess*.

Winds in the mid-latitudes are a function of the jet stream and of the ‘baroclinic instability’ that we see as low-pressure systems. In the tropics, winds locally depend strongly on convective activity and on a larger scale, the Hadley circulation. In monsoonal regions (West Africa, India etc.), winds are a function of the temperature contrasts over land and sea during the warm seasons. Winds can be affected by the ozone hole in the Southern Ocean, a change in the orbit of the Earth in the tropics, or by the presence or absence of an ice sheet. So the concept of winds changing in a general sense is not unusual or unexpected. However, because of the many distinct influences you wouldn’t expect all winds to increase or decrease together.

In the free atmosphere off the equator, wind is essentially ‘geostrophic’ which means that it’s driven by the (predominantly north-south) gradients in air pressure, and follows contours of constant pressure (’isobars’). Near the surface, friction slows the winds, and causes them to cross the isobars from high to low pressure (hence we get ‘convergence’ in the center of surface low pressure regions). Nonetheless, changes in surface winds will follow approximately from the associated change in the surface pressure field.

The business-as-usual projections show a general poleward shift of the current subtropical surface high pressure belt into the mid-latitudes, especially during summer (a poleward shift of the descending branch of the so-called “Hadley Cell”). The high pressure belt is a region of low pressure gradient, and hence low wind. A northward shift displaces the region of maximum westerly surface winds poleward, from the U.S. into, say, southern Canada. A decrease in the mean strength of the surface westerlies over the U.S. would therefore appear to be consistent with projected changes in large-scale circulation. However, it’s not that simple. The average wind speed at these latitudes depends as much on the day-to-day variance (driven primarily by mid-latitude storms) as it does on the mean strength of the climatological westerly surface winds. The gradient in temperature between subtropics and pole tends to decrease with global warming (due to the ‘polar amplification’ of warming) and this, in turn, diminishes the “baroclinicity” of the atmosphere, and thus, the degree of storminess. So both a decrease in baroclinicity and a poleward shift in the extratropical band of westerly surface winds would therefore seem to work in the direction of decreasing wind in mid-latitudes.

But even this reasoning is somewhat questionable, as wind anomalies over a region as small as the U.S. are unlikely to be representative of the trend for the entire latitude band on the whole. Factors such as El Nino, and the “Northern Annular Mode” have an important role on wind patterns over the U.S., and changes in the behavior of these phenomena could easily overwhelm the average trend for the mid-latitude band. So in short, the observations of decreasing wind speeds over the U.S. are in a rough sense consistent with these ideas, but given the uncertainties in factors that are important in determining wind patterns over the scale of the U.S. continent, it’s hard to say precisely what would be expected. 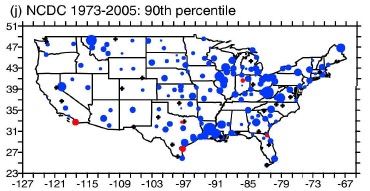 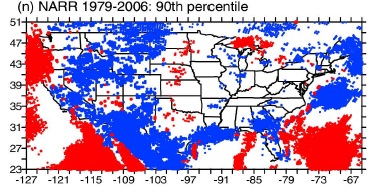 Figure 1. The trends in the station winds and in the N. American reanalysis (from fig.4 in Pryor et al.)

In the specific case of the GISS-ER model, we can easily see what the model suggests. The picture below gives the annual mean wind speed change for a business-as-usual scenario out to 2100 (we picked this just because the changes are large, but a picture for simulated trends over the last 50 years is similar).

The first thing to note is that the expected changes are complex. There is a clear increase in the Southern Oceans (related to changing temperature trends in the lower stratosphere associated with both the ozone hole and greenhouse gas increases). There is also a change near the equator associated with increases in convective activity and a shift in the Hadley Cell. Note also that changes over land are very small, and in particular, over the US no significant changes are seen. The situation might be different in different models (or different seasons, or in the day-to-day variance), and so one wouldn’t want to read to much into this single figure, but it makes clear that a change in US windiness is not a strong ‘a priori’ expectation from global warming. This doesn’t of course shed any light on whether the observed trends are real, but it does speak to the attribution part of the discussion.

Indeed, you would need a careful detection/attribution analysis to see if the observed changes in wind speeds are consistent with the multi-model climate change projections. This has been done for surface temperature, precipitation, and sea level pressure changes, and there is no obvious reason it can’t be done for wind speeds if the data holds up.

Regardless of the cause of the indicated decline, is this likely to have a direct impact on wind power generation? There is a study by Archer and Jacobson that explores the potential for wind power over the US, and the results can be seen in this graph:

Wind speed class 3 (usable for power generation) and above (dark blue, green, yellow, red and black dots) are not that widespread, and are concentrated over the plains and offshore. Comparison to the trend map in the Pryor et al study (figure 1 above) shows only a limited overlap, so even if all these sites were being used, it’s not clear the trends would hamper wind-power generation much. However, this is highly speculative and will need to be looked at much more carefully in future.

Note that an apparent quote from David Deming that the possibility of decreased wind speed over the Eastern US is somehow in contradiction with the possibility of increased tropical storm intensity in the tropical Atlantic is embarrassing in the inappropriateness of the comparison.

180 Responses to "Winds of change"