Geoengineering has come a long way since first discussed here three years ago. [Here I use the term “geoengineering” to refer to “solar radiation management” (SRM) and not to carbon capture and sequestration (called “air capture” in the report), a related topic with quite different issues.] In a New Scientist interview, John Holdren, President Obama’s science adviser, says geoengineering has to be examined as a possible response to global warming, but that we can make no such determination now. A two-day conference on geoengineering organized by the U.S. National Academy of Sciences was held in June, 2009, with an opening talk by the President, Ralph Cicerone. The American Meteorological Society (AMS) has just issued a policy statement on geoengineering, which urges cautious consideration, more research, and appropriate restrictions. But all this attention comes with the message that we know little about the efficacy, costs, and problems associated with geoengineering suggestions, and that much more study is needed.

Bickel and Lane, however, do not hesitate to write a report that is rather biased in favor of geoengineering using SRM, by emphasizing the low cost and dismissing the many possible negative aspects. They use calculations with the Dynamic Integrated model of Climate and the Economy (DICE) economic model to make the paper seem scientific, but there are many inherent assumptions, and they up-front refuse to present their results in terms of ranges or error bars. Specific numbers in their conclusions make the results seem much more certain than they are. While they give lip service to possible negative consequences of geoengineering, they refuse to quantify them. Indeed, the purpose of new research is to do just that, but the tone of this report is to claim that cooling the planet will have overall benefits, which CAN be quantified. The conclusions and summary of the report imply much more certainty as to the net benefits of SRM than is really the case.

My main areas of agreement with this report are that global warming is an important, serious problem, that SRM with stratospheric aerosols or cloud brightening would not be expensive, and that we indeed need more research into geoengineering. The authors provide a balanced introduction to the issues of global warming and the possible types of geoengineering.

But Bickel and Lane ignore the effects of ocean acidification from continued CO2 emissions, dismissing this as a lost cause. Even without global warming, reducing CO2 emissions is needed to do the best we can to save the ocean. The costs of this continuing damage to the planet, which geoengineering will do nothing to address, are ignored in the analysis in this report. And without mitigation, SRM would need to be continued for hundreds of years. If it were stopped, by the loss of interest or means by society, the resulting rapid warming would be much more dangerous than the gradual warming we are now experiencing.

Bickel and Lane do not even mention several potential negative effects of SRM, including getting rid of blue skies, huge reductions in solar power from systems using direct solar radiation, or ruining terrestrial optical astronomy. They imply that SRM technologies will work perfectly, and ignore unknown unknowns. Not one cloud has ever been artificially brightened by injection of sea salt aerosols, yet this report claims to be able to quantify the benefits and the costs to society of cloud brightening.

They also imply that stratospheric geoengineering can be tested at a small scale, but this is not true. Small injections of SO2 into the stratosphere would actually produce small radiative forcing, and we would not be able to separate the effects from weather noise. The small volcanic eruptions of the past year (1.5 Tg SO2 from Kasatochi in 2008 and 1 Tg SO2 from Sarychev in 2009, as compared to 7 Tg SO2 from El Chichón in 1982 and 20 Tg SO2 from Pinatubo in 1991) have produced stratospheric clouds that can be well-observed, but we cannot detect any climate impacts. Only a large-scale stratospheric injection could produce measurable impacts. This means that the path they propose would lead directly to geoengineering, even just to test it, and then it would be much harder to stop, what with commercial interests in continuing (e.g., Star Wars, which has not even ever worked).

With respect to ozone, they dismiss concerns about ozone depletion and enhanced UV by citing Wigley (2006) and Crutzen (2006), but ignore the results of Tilmes et al. (2008), who showed that the effects would prolong the ozone hole for decades and that deployment of stratospheric aerosols in a couple decades would not be safe as claimed here. Bickel and Lane assert, completely incorrectly, “On its face, though, it does not appear that the ozone issue would be likely to invalidate the concept of stratospheric aerosols.”

With respect to an Arctic-only scheme, they suggest in several places that it would be possible to control Arctic climate based on the results of Caldeira and Wood (2008) who artificially reduce sunlight in a polar cap in their model (the “yarmulke method”), whereas Robock et al. (2008) showed with a more realistic model that explicitly treats the distribution and transport of stratospheric aerosols, that the aerosols could not be confined to just the Arctic, and such a deployment strategy would affect the summer Asian monsoon, reducing precipitation over China and India. And Robock et al. (2008) give examples from past volcanic eruptions that illustrate this effect, such as the pattern of precipitation reduction after the 1991 Pinatubo eruption (Trenberth and Dai, 2007): 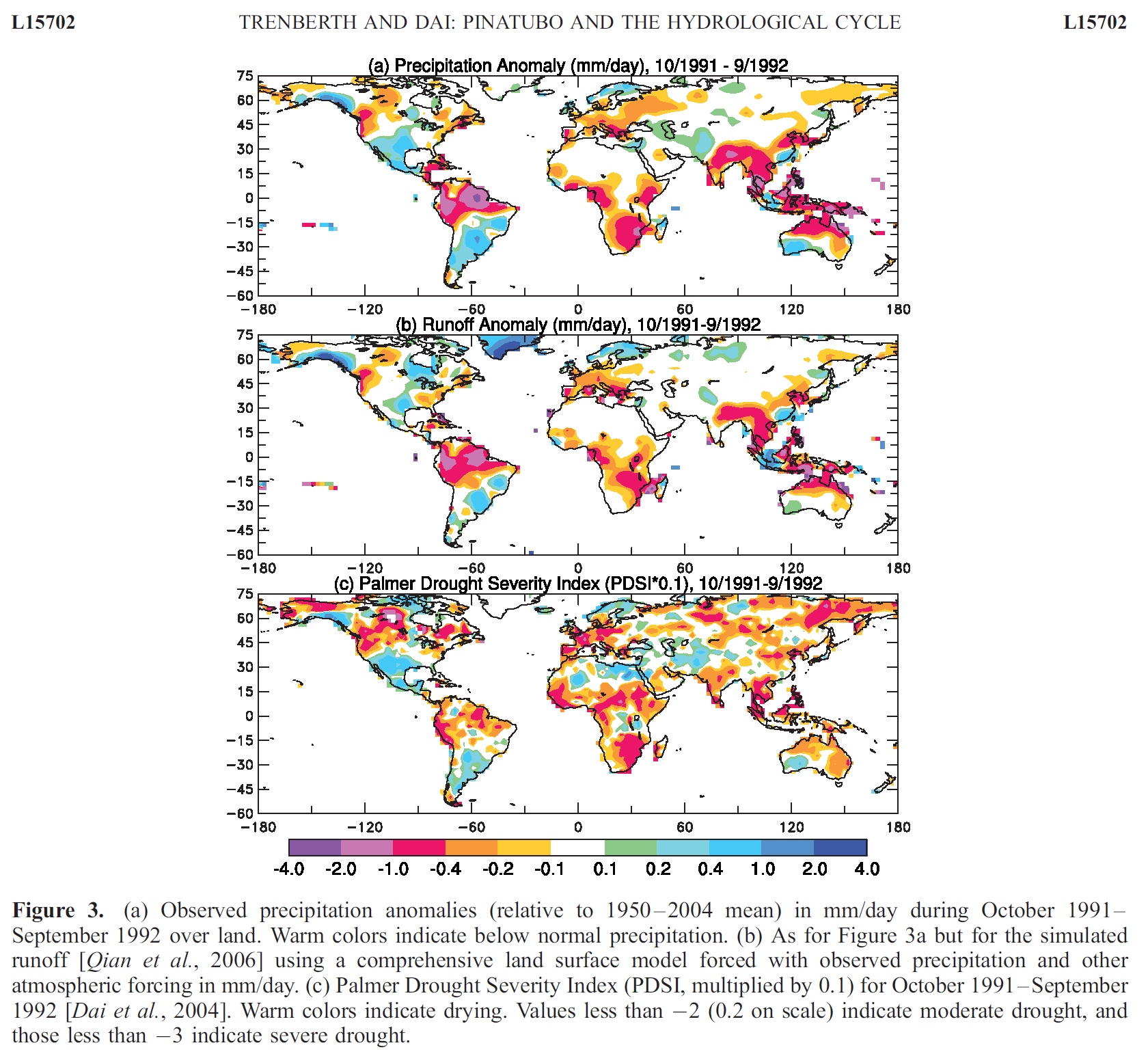 They also ignore a huge class of ethical and world governance issues. Whose hand would be on the global thermostat? Who would trust military aircraft or a multi-national geoengineering company to have the interests of the people of the planet foremost?

They do not seem to realize that volcanic eruptions affect climate change because of sulfate aerosols produced from sulfur dioxide gas injections into the stratosphere, the same that is proposed for SRM, and not by larger ash particles that fall out quickly after and eruption and do not cause climate change.

They dismiss air capture (“air capture technologies do not appear as promising as solar radiation management from a technical or a cost perspective”) but ignore the important point that it would have few of the potential side effects of SRM. Air capture would just remove the cause of global warming in the first place, and the only side effects would be in the locations where the CO2 would be sequestered.

For some reason, they insist on using the wrong units for energy flux (W) instead of the correct units of W/m^2, and then mix them in the paper. I cannot understand why they choose to make it so confusing.

The potential negative consequences of stratospheric SRM were clearly laid out by Robock (2008) and updated by Robock et al. (2009), which still lists 17 reasons why geoengineering may be a bad idea. One of those important possible consequences, the threat to the water supply for agriculture and other human uses, has been emphasized in a recent Science article by Gabi Hegerl and Susan Solomon.

Robock et al. (2009) also lists some benefits from SRM, including increased plant productivity and an enhanced CO2 sink from vegetation that grows more when subject to diffuse radiation, as has been observed after every recent large volcanic eruption. But the quantification of these and other geoengineering benefits, as well as the negative aspects, awaits more research.

It may be that the benefits of geoengineering will outweigh the negative aspects, and that most of the problems can be dealt with, but the paper from Lomborg’s center ignores the real consensus among all responsible geoengineering researchers. The real consensus, as expressed at the National Academy conference and in the AMS statement, is that mitigation needs to be our first and overwhelming response to global warming, and that whether geoengineering can even be considered as an emergency measure in the future should climate change become too dangerous is not now known. Policymakers will only be able to make such decisions after they see results from an intensive research program. Lomborg’s report should have stopped at the need for a research program, and not issued its flawed and premature conclusions.

329 Responses to "A biased economic analysis of geoengineering"