Our study published in mid October in Geophysical Research Letters (Tedesco and Monaghan, 2009) documents record minimum snowmelt for Antarctica during austral summer 2008-2009 and lower-than-normal melt for several recent years, based on a 30-year satellite microwave record. Numerous blogs have cited the results as a challenge to previous studies reporting Antarctic warming, while also steadfastly ignoring other studies with similar results (e.g. Barrett et al., 2009). They have overlooked that these studies show that Antarctic warming has occurred mostly in winter and spring, whereas melting of course occurs in summer. And they oversimplify the causality and hence confuse our prediction for the future. We found that the same mechanism that has primarily caused low snowmelt in recent years will likely change in a manner that will enhance snowmelt in forthcoming decades. A brief summary follows. 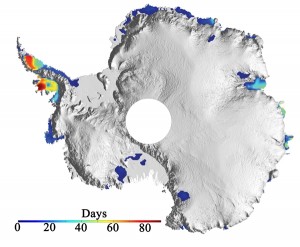 Map of Antarctica showing number of melting days in summer 2008-2009.

Our study demonstrates that low melt years during the 1979-2009 satellite record are related to the strength of the westerly winds that encircle Antarctica, known as the Southern Hemisphere Annular Mode (SAM). When the SAM is in a positive phase – meaning that the belt of winds is stronger than average – it has a cooling effect on Antarctic surface temperatures. The SAM was especially strong in austral spring and summer 2008-2009, and subsequently the 2008-2009 snowmelt was lower than normal. During the past 30-40 years, the SAM has gradually strengthened during austral summer (Marshall 2003), due mainly to human-caused stratospheric ozone depletion. In turn, the increasing SAM has weakened longer-term summer warming over Antarctica. The SAM index is not strongly positive every year of course, and particularly when combined with other atmospheric circulation changes (e.g. a strongly positive Southern Oscillation Index (SOI) – indicative of La Nina conditions) may contribute to anomalously high or low summer temperatures in any given year. The figures shown in our Supplementary Material section in our original paper illustrate this point nicely (below): 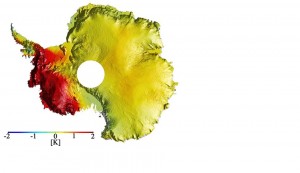 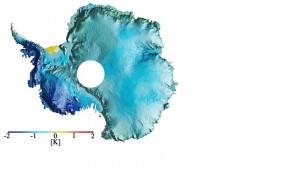 The ozone hole is projected to recover significantly during the next 25 – 50 years due to the Montreal Protocol, which limits ozone-depleting substances used in industrial and household applications. As the ozone hole ‘heals’, the increasing summer SAM trends are projected to subside. As this happens, it is likely that summer temperature increases over Antarctica will become stronger and more widespread because the warming effect from greenhouse gas increases will no longer be kept in check by the dynamic
cooling impact of the SAM.

Therefore, the linkage between the SAM and snowmelt leads to our key conclusion: that enhanced snowmelt is likely in Antarctica as the SAM trends subside during the 21st century and summer temperatures become warmer. Our results agree with studies that have noted cooling and/or slower warming during the past three decades due to increasing SAM trends over the same period. Additionally, our conclusions do not contradict findings showing strong regional warming on the Antarctic Peninsula and in West Antarctica for the past 50 years, and warming over the entire continent for the past century. Our record is limited to the satellite era only, during which ozone depletion has dominated Antarctic summer temperature trends, and as already noted above, the observed warming in the last 50-100 years has occurred mostly in winter and spring. This context is important.

92 Responses to "Putting the recent Antarctic snowmelt minimum into context"