You are here: Home / Climate Science / Climate modelling / It’s all about me (thane)!

Well, it’s not really all about me. But methane has figured strongly in a couple of stories recently and gets an apparently-larger-than-before shout-out in Al Gore’s new book as well. Since a part of the recent discussion is based on a paper I co-authored in Science, it is probably incumbent on me to provide a little context.

First off, these latest results are being strongly misrepresented in certain quarters. It should be obvious, but still bears emphasizing, that redistributing the historic forcings between various short-lived species and CH4 is mainly an accounting exercise and doesn’t impact the absolute effect attributed to CO2 (except for a tiny impact of fossil-derived CH4 on the fossil-derived CO2). The headlines that stated that our work shows a bigger role for CH4 should have made it clear that this is at the expense of other short-lived species, not CO2. Indeed, the attribution of historical forcings to CO2 that we made back in 2006 is basically the same as it is now.

As is well known, methane (CH4) is the greenhouse gas whose anthropogenic increase comes second only to CO2 in its 20th Century effect on climate. It is often stated that methane is ‘roughly 20 times more powerful’ as a greenhouse gas than CO2 and this can refer to one of two (very different) metrics. If you calculate the instantaneous forcing for an equivalent amount of CO2 and CH4 (i.e. for a 1 ppmv increase in both), you find that the global forcing for CH4 is about 23-24 times as large (depending slightly on the background assumed). Separately, if you look up the Global Warming Potential (GWP) of CH4 in IPCC AR4 (the integrated forcing of a kg of CH4 compared to kg of CO2 over a 100 year period), you get a value of about 25. GWP is used to compare the effects of emissions today on climate in the future. The numbers are only coincidentally similar since the GWP incorporates both the weight ratio and the ratio of effective lifetimes in the atmosphere which roughly cancel for a 100 year time-horizon.

In the Second Assessment report (1995), the GWP for methane was 21, and it was increased in AR4 because of a greater appreciation for the indirect effects of methane on atmospheric chemistry, and in particular its role as a tropospheric ozone precursor (since increasing methane leads to an increase in low level ozone). There is also an indirect effect on stratospheric water vapour where methane oxidation is a significant source of water in an otherwise very dry region. Both tropospheric ozone and stratospheric water vapour are effective greenhouse gases so including these indirect effects made the net effect of methane greater.

In the standard ‘forcings bar chart’ such as seen in Hansen’s papers, or in TAR, or AR4 (figure 2.20), each change in atmospheric composition is given a separate column. Thus ozone and aerosol effects are denoted separately. Starting off with a paper we wrote in 2005, though, a different approach that is perhaps more useful to policy makers has also been adopted. This ’emissions-based’ viewpoint attributes the forcings to the actual emissions, rather than to the eventual concentration. Thus since some of the ozone increase is related to CH4 emissions, you get to include that under CH4. The other ozone precursors (carbon monoxide and volatile organic compounds) can also now be blamed for a portion of the ozone impact.

This was incorporated into figure 2.21 in AR4, where it is clear that the impact of methane (once some indirect effects are included) is greater than you would have thought based on the ‘abundance’ viewpoint. Note the changes basically only affect the reactive species. When thinking about the various metrics, the emissions-based view is more closely tied to GWP than the traditional abundance-based approach. A big difference is that GWP is looking forward in time, while emission-based forcings are looking back at historical events.

The increasing sophistication when it comes to attribution and GWP is strongly connected to the development of more comprehensive Earth System Models (ESM) in recent years. These are the descendants of the General Circulation Models of the climate that have been developed over the last 30 years, but that now include interactive atmospheric chemistry, aerosols (natural and anthropogenic) and sometimes full carbon cycles in the ocean and land surface. This extra machinery allows for new kinds of experiments to be done. Traditionally, in a GCM, one would impose atmospheric composition forcings by changing the concentrations of the species in the atmosphere e.g. the CO2 level could be increased, you could add more sulphate, or adjust the ozone in the stratosphere etc. However, with an ESM you can directly input the emissions (of all of the relevant precursors) and then see what ozone levels or aerosol concentrations you end up with. This allows you to ask more policy-relevant questions regarding the net effects of a particular sector’s emissions or the impact of a specific policy on climate forcing and air pollution (see here for a discussion). 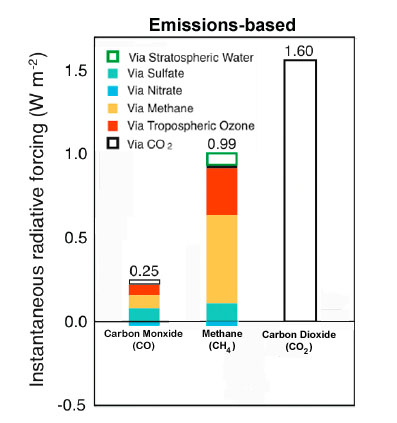 Our new Science paper (Shindell et al, 2009) expands on some of the earlier work (as was discussed here) and extended consideration of the indirect effects of CH4 and CO (carbon monoxide) to aerosols as well. This is necessary since SO2 requires oxidants to transform to sulphates (and so is affected by the perturbation of the chemistry by other emissions), and it takes into account the competition between nitrates and sulphates for ammonia (which means that there is a small anti-phasing effect – increasing sulphates tends to decrease nitrates and vice versa). When we did this, we found that methane’s impacts increased even further since increasing methane lowers OH and so slows the formation of sulphate aerosol and, since sulphates are cooling, having less of them is an additional warming effect. This leads to an increase in the historical attribution to methane (by a small amount), but actually makes a much bigger difference to the GWP of methane (which increases to about 33 – though with large error bars).

Currently methane levels are relatively stable (despite small upticks in the last two years) and are running below IPCC projections made in 2001 (this of course is good news). However, CH4 is at more than twice its pre-industrial concentration and so still presents a tempting target for emission reductions which, because of our new work and the relatively short lifetime in the atmosphere, will likely be a little more effective at reducing future forcings than previously thought. Given the value of methane as a fuel, it is likely that more of it will be captured (as in this recent story).

CO2, however, is still increasing dramatically despite the slow down in the economy, and so current growth in radiative forcings is dominated by CO2 and that will very likely continue for decades. Despite our increasing appreciation of the role of other forcings (including land use for instance), the overwhelming driver of climate change in the 21st Century will be CO2 increases.

In a follow-up post, I’ll discuss the sources of methane and the implications of the new results for attribution of climate forcing to different sectors (including agriculture), where there have been some very odd (i.e. wrong) recently published numbers.