You are here: Home / Climate Science / Arctic and Antarctic / An icy retreat
Translations: (

It’s almost routine by now: Every summer, many of those interested in climate change check again and again the latest data on sea-ice evolution in the Arctic. Such data are for example available on a daily basis from the US National Snow and Ice Data Center. And again and again in early summer the question arises whether the most recent trend in sea-ice extent might lead to a new record minimum, with a sea-ice cover that will be smaller than that in the record summer of 2007.

However, before looking at the possible future evolution of Arctic sea ice in more detail, it might be a good idea to briefly re-capitulate some events of the previous winter, because some of those are quite relevant for the current state of the sea-ice cover. The winter 2009/2010 will be remembered by many people in Europe (and not only there) as particularly cold, with lots of snow and ice. Not least because of the sustained cold, some began to wonder if global warming indeed was real.

Such questioning of global warming based on a regional cold period of course neglects the crucial difference between weather and climate, with the former being the only thing that we as individuals will ever be able to experience first hand. A single regional cold spell has not a lot to do with climate – let alone with global climate. This becomes quite obvious if one instead considers the mean temperature of the entire globe during the last 12 months: this period was, according to the GISS data, the warmest 12-month period since the beginning of the records 130 years ago. Regarding sea ice, it was particularly important that temperatures in parts of the Arctic were well above average for most of the winter. This was directly experienced by some members of our working group during a field experiment at the West Coast of Greenland. 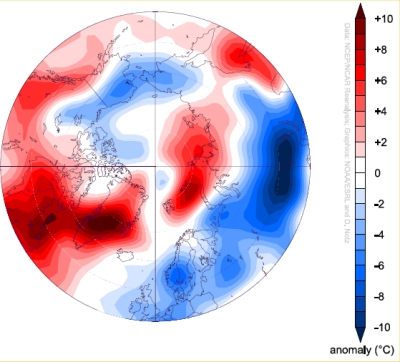 Fig. 1: Temperature anomaly at 1000 hPa during the first half of January 2010 with respect to the period 1968-1996. Warm anomalies in the Arctic and cold anomalies in Northern Europe and parts of North America are clearly visible.

The initial plan of this field experiment was to study the growth and decay of sea ice in great detail throughout an entire winter. In particular, we wanted to focus on the evolution of very young sea ice that had just formed from open water. Therefore, we wanted to start our measurements just before initial ice formation, which usually takes place in mid-November, at least according to past experience of the local Greenlandic population. Hence, we traveled to our measuring site close to the Greenlandic settlement of Upernavik in early November to put out our measuring buoys. We were hoping that ice formation would start shortly after we had put out the instruments such that they were protected from storms and waves. However, with temperatures that were often more than 10°C above the long-term mean, sea ice was nowhere to be seen. Even in January, there were days on end with above 0°C temperature and heavy rain fall. Finally, in February a stable ice cover formed, which of course remained relatively thin and which hence had melted completely by mid May.

The fact that it was sometimes warmer at our measurement site at the West Coast of Greenland than it was in Central Europe at the same time surprised us quite a bit. However, some recent studies indicate that such a distribution of relatively high temperature in parts of the Arctic and relatively low temperature in Northern and Central Europe and parts of the US might become somewhat more wide-spread in the future. While the Arctic has always shown large internal variability that lead to large-scale shifts in weather patterns, in the future the ongoing retreat of Arctic sea ice might cause those weather patterns to occur more often that allow for Northerly winds to bring cold air from the Arctic to the mid-latitudes. Hence, it is quite possible that because of the retreat of Arctic sea ice, some smaller parts of the Northern Hemisphere will experience pronounced cold spells during winter every now and then. The mean temperature of the Northern Hemisphere will nevertheless increase further, and the export of cold air from the Arctic of course leads to warm anomalies there. 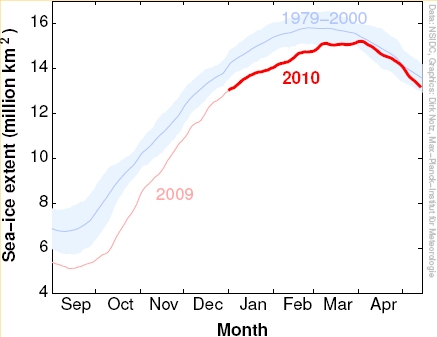 Fig.2: Evolution of Arctic sea-ice extent from September 2009 until mid May 2010. The blue line denotes the mean extent from 1979 until 2000, while the shaded region denotes the variability during that time (± 2 standard deviations)

But let’s return to the evolution of Arctic sea ice. Because of relatively high temperatures, Arctic sea-ice extent remained well below the long-term mean for most of the preceding winter. However, in March temperatures suddenly dropped for a couple of weeks, in particular in parts of the Barents Sea and in parts of the Beaufort Sea. This in turn lead to the formation of a thin ice cover in these regions, which caused a marked increase in observed sea-ice extent. For the measurement of this extent, it doesn’t matter at all how thick the ice is: any ice, however thin, contributes to sea-ice extent. Therefore, only considering a possible “recovery” of just the extent of Arctic sea ice always remains somewhat superficial, since sea-ice extent contains no information on the thickness of the ice. A much more useful measure for the state of Arctic sea ice is therefore the total sea-ice volume. However, for its estimation one additionally requires information on the overall distribution of ice thickness, which we have not been able to measure routinely in the past. While this will hopefully change in the future because of the successful launch of the Cryosat 2 satellite a couple of weeks ago, at the moment we unfortunately must rely on judging the current state of the Arctic sea-ice cover mostly by its extent. 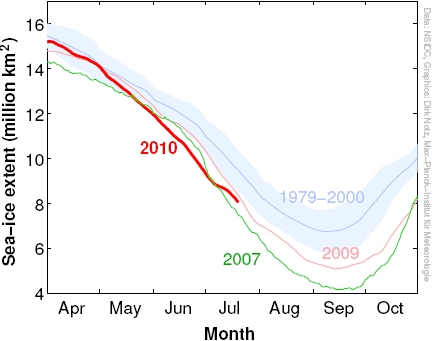 Fig.3: Evolution of Arctic sea-ice extent since April 2010 in comparison to 2007 and 2009. The blue line denotes the mean extent from 1979 until 2000, while the shaded region denotes the variability during that time (± 2 standard deviations)

Because of the very low thickness of much of the Arctic sea ice, it wasn’t too surprising that at the end of the winter, sea-ice extent decreased rapidly. This rapid loss lead up to the lowest June sea-ice extent since the beginning of reliable observations. After this rapid loss of the very thin ice that had formed late in winter, the retreat slowed down substantially but the ice extent remained well below the long-term mean. Currently, the ice covers an area that is slightly larger than the extent in late July of the record year 2007. However, this does not really allow for any reliable projections regarding the future evolution of Arctic sea ice in the weeks to come.

The reason for this is mostly that sea ice in the Arctic has become very thin. Hence, in contrast to the much thicker ice of past decades, the ice now reacts very quickly and very sensitively to the weather patterns that are predominant during a certain summer. This currently limits the predictability of sea-ice extent significantly. For example, in 2007 a relatively stable high-pressure system formed above the Beaufort sea, towards the north of North America, leading to rapid melting of sea ice there. If again such stable high pressure system forms in the Arctic throughout the coming weeks, we might well experience a sea-ice minimum that is below the record minimum as observed in 2007. However, if the summer should turn out to be colder than during the previous years, a sea-ice minimum similar to that observed in 2009 would not be too surprising. Hence, at the moment all that remains is to wait – and to check again and again the latest data of Arctic sea-ice extent. 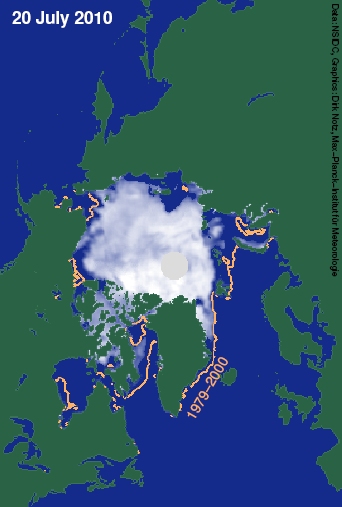 Dirk Notz is head of the research group “Sea ice in the Earth System” at the Max-Planck-Institute for Meteorology in Hamburg.