You are here: Home / Climate Science / Getting things right

Last Monday, I was asked by a journalist whether a claim in a new report from a small NGO made any sense. The report was mostly focused on the impacts of climate change on food production – clearly an important topic, and one where public awareness of the scale of the risk is low. However, the study was based on a mistaken estimate of how large global warming would be in 2020. I replied to the journalist (and indirectly to the NGO itself, as did other scientists) that no, this did not make any sense, and that they should fix the errors before the report went public on Thursday. For various reasons, the NGO made no changes to their report. The press response to their study has therefore been almost totally dominated by the error at the beginning of the report, rather than the substance of their work on the impacts. This public relations debacle has lessons for NGOs, the press, and the public.

The erroneous claim in the study was that the temperature anomaly in 2020 would be 2.4ºC above pre-industrial. This is obviously very different from the IPCC projections: 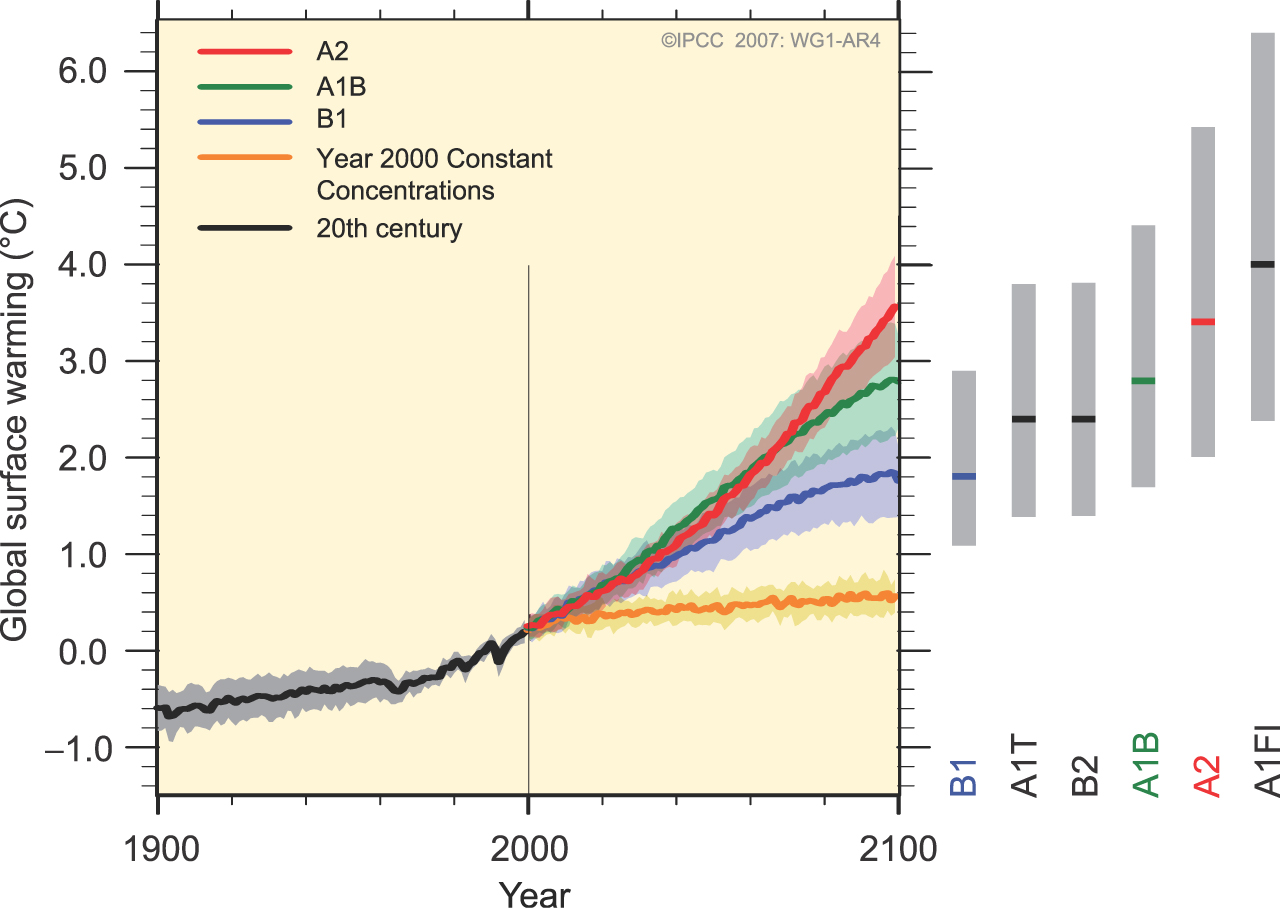 which show trends of about 0.2ºC/decade, and temperatures at 2020 of around 1-1.4ºC above pre-industrial. The claim is thus at least 1ºC above what it should have been, and implied trends over the next decade an order of magnitude higher than otherwise expected.

How they made this mistake is quite instructive though. The steps they followed were as follows:

The first error is in misunderstanding what CO2-eq means and is used for. Unfortunately, there are two mutually inconsistent definitions out there (and they have been confused before). The first, used by policymakers in relation to the Kyoto protocol, relates the radiative impact of all the well-mixed greenhouse gases (i.e. CO2, CH4, N2O, CFCs) to an equivalent amount of CO2 for purposes of accounting across the basket of gases. Current GHG amounts under this definition are ~460 ppm, and conceivably could be 490 ppm by 2020.

However, the other definition is used when describing the total net forcing on the climate system. In that case, it is not just the Kyoto gases that must be included but also ozone, black carbon, sulphates, land use, nitrates etc. Coincidentally, all of the extra GHGs and aerosols actually cancel out to a large extent and so the CO2-eq in this sense is quite close to the actual value of CO2 all on its own (i.e. in IPCC 2007, the radiative forcing from CO2 was 1.7 W/m2, and the net radiative forcing was also 1.7 W/m2 (with larger uncertainties of course), implying the CO2-eq was equal to actual CO2 concentrations).

In deciding how the climate is going to react, one obviously needs to be using the second definition. Using the first is equivalent to assuming that between now and 2020 all anthropogenic aerosols, ozone and land use changes will go to zero. So, they used an excessive forcing value (3 W/m2 instead of ~2 W/m2).

The second mistake is that they assumed that the instantaneous response to a forcing is the same as the long-term equilibrium response. This would be equivalent to a planet in which there was no thermal inertia – or one in which there were no oceans. Oceans have such a large heat capacity that it takes decades to hundreds of years for them to equilibriate to a new forcing. To quantify this, modellers often talk about transient climate sensitivity, a measure of a near term temperature response to an increasing amount of CO2, and which is often less than half of the standard climate sensitivity.

It has to be acknowledged that people sometimes make genuine mistakes without having any desire to mislead or confuse, and that this is most likely the case here. It does no responsible organisation any good to have such a mistake in their material. It just leads to distractions from the substance of the report. The situation is serious enough that there is no need for exaggerated claims to produce headlines, just the plain unvarnished best guesses will be fine. It is likely that temperatures will reach 2.4ºC at some point this century, and so the calculated impacts are certainly relevant – just not in 2020.

Unfortunately, in this case the people involved did not decide to fix the errors that were pointed out, going so far as to have the PR person for the launch insist that the calculation was ok. That the Guardian journalist, Suzanne Goldenberg, took the time to check on the details is a credit to the press. The reaction can be put down to institutional inertia, combined with the fact that their scientific advisor was in hospital (and is 87). It would clearly have been much better to have had this properly peer reviewed ahead of time. To that end the AGU Q&A climate service or the Climate Science Rapid Reaction Taskforce (CSRRT) are invaluable resources for getting some quick scientific peer review.

107 Responses to "Getting things right"