You are here: Home / Communicating Climate / Nobel Laureates Speak Out

On Wednesday, 17 Nobel laureates who gathered in Stockholm have published a remarkable memorandum, asking for “fundamental transformation and innovation in all spheres and at all scales in order to stop and reverse global environmental change”. The Stockholm Memorandum concludes that we have entered a new geological era: the Anthropocene, where humanity has become the main driver of global change. The document states:

Science makes clear that we are transgressing planetary boundaries that have kept civilization safe for the past 10,000 years. […]
We can no longer exclude the possibility that our collective actions will trigger tipping points, risking abrupt and irreversible consequences for human communities and ecological systems.
We cannot continue on our current path. The time for procrastination is over. We cannot afford the luxury of denial. 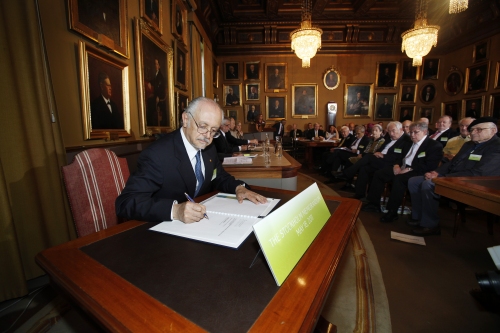 The memorandum results from a 3-day symposium (attended also by the king of Sweden) on the intertwined problems of poverty, development, ecosystem deterioration and the climate crisis. In the memorandum, the Nobel laureates call for immediate emergency measures as well as long-term structural solutions, and they give specific recommendations in eight key priority areas. For example in climate policy, they recommend to:

Keep global warming below 2ºC, implying a peak in global CO2 emissions no later than 2015 and recognise that even a warming of 2ºC carries a very high risk of serious impacts and the need for major adaptation efforts.

The memorandum was handed over to the members of the UN high-level panel on global sustainability, who traveled to Stockholm in order to discuss it with the Nobel laureates and experts at the symposium.

p.s. As a little reminder of the ongoing work of the merchants of doubt, a small band of five or six “climate sceptic” protesters were gathered outside the symposium, some of whom flown in from Berlin. Their pamphlet identified them as part of the longstanding anti-climate-science campaign of US billionaire Lyndon Larouche and claimed that climate change is “a hoax” and an “insane theory”, the global temperature measurements are “mere lies”, the Nobel laureates meeting “a conspiracy” and the Stockholm Memorandum a “Fascist Manifesto”. I approached one of the protesters who carried a banner “against Green fascism” and asked him whether he seriously believes what his pamphlet says, namely that our meeting is a “symposium for global genocide”. He nodded emphatically and replied: “Yes, of course!”

157 Responses to "Nobel Laureates Speak Out"