You are here: Home / Climate Science / Is Sea-Level Rise Accelerating?

A few months ago a paper by Jim Houston and Bob Dean in the Journal of Coastal Research (JCR) cast doubt on whether global sea level rise has accelerated over the past century or so. As things go these days, ‘climate sceptics’ websites immediately heralded this as a “bombshell”. A rebuttal by myself and Martin Vermeer has now been published in JCR.

The keystone of the argument by Houston & Dean is the fact that a prominent global sea level reconstruction (Church & White 2006) shows no acceleration since 1930. Which raises the question: why 1930, given the sea level data set starts in 1870? The reason becomes immediately evident when looking at the acceleration starting from any arbitrary date (Fig. 1). 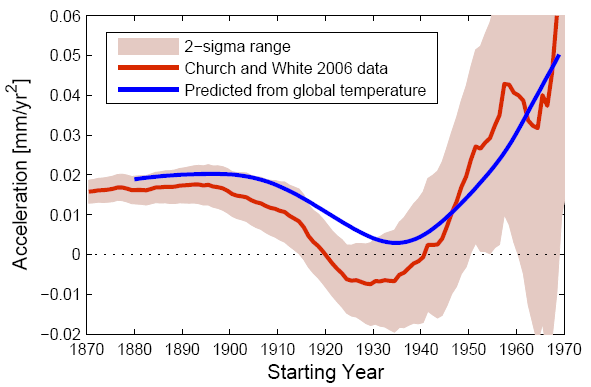 Figure 1. Acceleration of sea-level rise (i.e., twice the quadratic coefficient) from different starting years up to 2001 in the global tide gauge data set of Church and White (2006; red line with uncertainty band). Note that after ~1960 the calculation gets excessively ‘noisy’ because the time interval gets too short to robustly compute acceleration. I graphed this right away after reading the Houston & Dean paper, and a few days later Tamino independently came up with a similar plot – it’s the obvious thing to do. The blue line shows the same quantity from the sea-level hindcast of Vermeer & Rahmstorf (2009) computed from global temperature data.

Around 1930 we see a unique minimum in the acceleration curve – I will explain the cause of this shortly. Other start dates either before or after this minimum show positive acceleration. Picking 1930 for this analysis is thus a classic cherry-pick, and according to the authors that is no accident. They write in the paper: ‘Since the worldwide data of Church and White (2006)…appear to have a linear rise since around 1930, we analyzed the period 1930 to 2010.’ The interval was thus hand-picked to show a linear rise rather than acceleration.

Houston & Dean use their result to question the future acceleration of sea level rise predicted by Vermeer & Rahmstorf (2009) for the 21st Century as a consequence of global warming. They argue that the 1930s acceleration minimum calls into question the semi-empirical link between global temperature and global sea level proposed by us in that paper. However, it is clear they never bothered to check this, because quite the opposite is the case: our semi-empirical formula predicts this acceleration minimum, as the graph above shows. As it turns out, this is an expected outcome of the mid-20th-Century plateau in global temperature.

If one subtracts out the non-climatic sea level change due to water stored in artificial reservoirs on land, as we did in Vermeer & Rahmstorf (2009), then the agreement between the acceleration curve predicted from global temperature with the actually observed curve is even better (graph below). Thus, the 1930s acceleration minimum pointed out by Houston & Dean supports our approach and projections rather than challenging them. 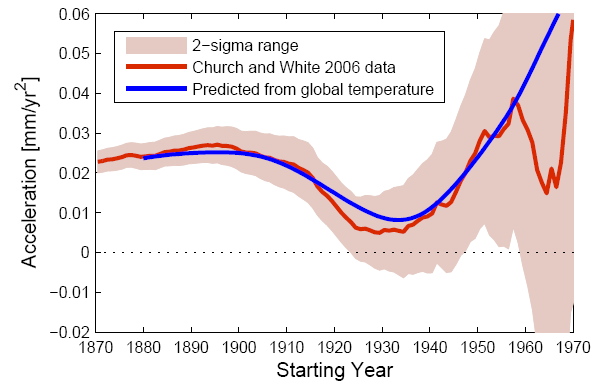 Figure 2. The same as Figure 1, but here the sea-level data are corrected for water storage in artificial reservoirs (Chao, Wu, and Li, 2008).

it is not clear that the acceleration necessary to achieve these comparatively large projected rises in mean sea level over the course of the 21st century is evident in tide-gauge records.

Houston and Dean raise a number of further points (beyond the Church & White global data set) on which we just cite the brief summary statements and refer the readers to our journal comment for more detail:

However, again, 1930 is a special choice, and U.S. tide gauges only provide a regional signal, not a global one.

However, these variations in decadal tide gauge trends are not a climate signal but rather are dominated by sampling noise due to the inadequate number of tide gauges.

But this time interval is far too short to draw any conclusions.

For the evidence, just have a look at some of the references listed below.

p.s. I just see that JCR also carries a reply by Houston & Dean to our comment. This largely focuses on our supposedly “selective” use of data, because we show the acceleration of sea level rise ‘only’ for starting years from 1870 (the start of the data set) to 1970 (after which the computation is too noisy to be meaningful by anyone’s standard). This is slightly ironic given that Houston & Dean focused only on the rather unique start year 1930. Houston and Dean further argue that the data already become too noisy around 1940 because “decadal fluctuations begin to dominate records shorter than about 60 years, and accelerations become increasingly meaningless for starting years in Figure 1 greater than about 1940”. We disagree: while this may be true for individual records it is not true for the global sea level reconstruction shown. The 2-sigma range and the fact that the curve is smooth until then shows it is meaningful up to about 1960; we continued the graph up to 1970 in order to show (rather than just claim in the text) how the uncertainty explodes after 1960. In any case, by showing the plot until 1970, we allow readers to see the full potentially meaningful range and judge for themselves whether they see any significant difference between the data and our model. That our model is somehow called into question by the observed sea level acceleration was, after all, a key claim in Houston & Dean’s original paper.

Houston & Dean excuse the strong northern-hemisphere bias introduced by their simple averaging by saying that “this criticism would apply to any study of sea-level rise”. That is not true; the sea level data set we use (Church and White 2006) and also the temperatures (GISS) use an area-weighted averaging scheme that makes sure the northern and southern hemispheres are properly represented in proportion to their surface areas, regardless of the data density.

But at least on one thing we agree. As Houston & Dean state in their final sentence, we indeed predict a much larger acceleration of sea level rise in the 21st Century than is observed in the 20th Century. That is a direct logical consequence of the fact that we expect much larger warming in the 21st than in the 20th.

Update 24 July: A related case of “lack of acceleration” – also from the Journal of Coastal Research – is expertly treated by Tamino here: How Not to Analyze Tide Gauge Data. It does raise some questions about the quality of peer review at JCR.

192 Responses to "Is Sea-Level Rise Accelerating?"