You are here: Home / Climate Science / Climate cynicism at the Santa Fe conference

The Third Santa Fe Conference on Global and Regional Climate Change was held during Halloween week. It was most notable for the breadth of opinion — and the span of credibility — of its speakers. I have long complained about the lack of willingness of most contrarians to attend and present their arguments at mainstream scientific conferences. After three years of convening climate-related sessions at AGU, I have yet to receive an abstract that argues against anthropogenic global warming. Such presentations can usually only be seen at conferences held by the Heartland Institute. There isn’t much chance of a mainstream scientist attending a meeting organized by a political think tank known for its anti-science activism, so opportunities for interaction between the groups are rare.

The conference was the third in a series (the first was held in Halifax ten years ago) that actively solicits participation from conventional scientists as well as those on the fringes. Organized by the Center for Nonlinear Studies of the Los Alamos National Laboratory, with co-sponsorship from the International Arctic Research Center, Brookhaven, and Oak Ridge National Laboratory, the meeting has sufficient credibility to attract speakers like Richard Peltier and Gerald North, while also providing the podium to Christopher Monckton and Don Easterbrook. Travel grants from LANL were provided to assist some of the speakers.

It quickly became apparent that the meeting would be run with a firm, no-nonsense approach to confrontation. In my original abstract, I used the term “contrarian,” which I have always considered to be a polite, non-judgmental descriptive term. Petr Chylek, LANL Laboratory Fellow and chair of the conference program committee responded by telling me, “I would like to ask you for some revision. The designations like ‘contrarians, skeptics, deniers, etc.’ may be offensive to some scientists present. Perhaps you can re-write your abstract and your presentation without using such words.” Fair enough, given the potential for contentiousness. Later, a generalized request went to all speakers: “Please, do not use any demeaning labels like deniers, contrarians, warmers, alarmists, … Please, stick to science. Stay away from personal attacks on other scientists present or not.”

I was disappointed, however, that the poster abstract I submitted with Lloyd Keigwin (WHOI), “Misrepresentations of Sargasso Sea Temperatures by Global Warming Doubters,” was rejected. This abstract was essentially the same material we presented at last year’s GSA meeting in Denver, and revealed the fact that a graph in Lloyd’s 1996 Science paper had been redrawn for the paper “Environmental Effects of Increased Atmospheric Carbon Dioxide” by Arthur Robinson and coauthors. Some of the original data on Lloyd’s graph had been removed and replaced by fabricated data, apparently in an attempt to argue that temperatures are lower now than the 3000-year average. The doctored version of the graph has been used repeatedly in opinion pieces and was reprinted by Fred Singer in the NIPCC report. It is arguably one of the most widely reproduced graphs in contrarian literature, and in one form was sent out to tens of thousands of scientists to solicit signatures for the so-called “Oregon petition”.

Petr Chylek, explaining his reason for rejection, said, “This Conference is not a suitable forum for type of presentations described in submitted abstract. We would accept a paper that spoke to the science, the measurements, the interpretation, but not simply an attempted refutation of someone else’s assertions (especially when made in unpublished reports and blog site).” Of course, I’m not sure that a correction by the author of a graph that has been improperly reproduced in the primary contrarian literature is not the same thing as an “attempted refutation”.

The first day of the conference was buzzing with news of Richard Muller’s announcement of the Berkeley Earth Surface Temperature (BEST) results. Just a week earlier, he had published an op-ed in the Wall Street Journal, titled, “The Case Against Global-Warming Skepticism (There were good reasons for doubt, until now)”. Then, only one day before the conference, David Rose of the Daily Mail broke a supposed “scandal”: “Scientist who said climate change sceptics had been proved wrong accused of hiding truth by colleague”. Muller’s coauthor, Judith Curry, was quoted saying, “There is no scientific basis for saying that warming hasn’t stopped. To say that there is detracts from the credibility of the data, which is very unfortunate.” This story was picked up by Fox News and the narrative that spread throughout the blogosphere was that “Curry has turned on Muller.”

Reading about climate change in the mainstream media — let alone on blogs — can be like looking at reality in a funhouse mirror. When Muller got up to discuss the BEST results on Tuesday morning, the first thing he did was point out that the title of the WSJ piece did not come from him. His original title was “Cooling the Global Warming Debate.” But since his name was under the title he didn’t write, it was automatically attributed to him, as a direct quote. In fact he said, he had been misquoted more times since this was published than he had in the rest of his life. The Daily Mail/Fox News story seemed just as distorted. If Curry and Muller had a major scientific disagreement, wouldn’t a scientific conference be the appropriate place for the debate? If they were at loggerheads over the fundamental question of whether “global warming hasn’t stopped” wouldn’t one of them have mentioned it? They each gave two presentations, and this never came up in public or in any conversation I was aware of.

The conference was remarkably well run. For the most part, participants were well behaved and adhered to Petr Chylek’s strict rules—avoiding inflammatory terms, and steering away from personal attacks and interruptions. The one exception was Judith Curry, who apparently did not get the memo. She gave a banquet presentation entitled, “The Uncertainty Monster at the Climate Science-Policy Interface”. My impression was that her presentation was intended to be more of a vehicle to criticize her adversaries than to talk about uncertainty.

Her most personal attack was against Michael Mann, who she used to illustrate “uncertainty hiding” by showing a caricature of him standing next to the “uncertainty monster” holding a hockey stick and hidden by a sheet, with the cartoon-Mann saying “what uncertainty?” Next to the cartoon was and image of the cover of the book “The Hockey Stick Illusion: Climategate and the Corruption of Science” illustrated with the multiproxy time series that Mann and his coauthors made famous. Ironically, Mann’s carefully plotted uncertainty bands were not visible on the presentation graphic, just as they were not reproduced in Fred Singer’s NIPCC report. “What uncertainty?” indeed!

Curry described her transition from a scientist who felt that it was the responsible thing to do to support the IPCC conclusions to someone who is “about 50% a denier”. She attributed this change to “climategate” and the reaction she received due to her initial comments about it. She was the only speaker who ignored the policy against the word “denier.” She used the banned “d-word” repeatedly for effect when setting up a straw-man argument against what she called “IPCC/UNFCCC ideology” — a term she coined to label notions such as “anthropogenic climate change is real” and “deniers are attacking climate science and scientists”. She assured the audience that she didn’t think there were any “IPCC ideologues” at the conference but she had heard rumors that some were invited and had declined. She called out Kevin Trenberth as a supposed example of such an ideologue (again rejecting the policy against personal attack).

Among her straw-man arguments was her dismissal of standard risk-reduction methodology for low-probability high-consequence events as a mere “precautionary principle” (the same principle that nuclear weapons engineers are taught when they told to always ask “what can go horribly wrong?”). One colleague later remarked that her approach to uncertainty quantification reminded him of an English major who had just finished reading Kuhn’s “The Structure of Scientific Revolutions.”

I met most of the conference participants during the course of the week, and had cordial conversations with all those with whom I disagreed. One thing I have long suspected was strongly reinforced: there is no common scientific understanding amongst contrarians. Many of them are just as critical of one another’s ideas as they are of conventional science. William Gray stood up after many of the presentations on solar influence to declare that solar variability is not important. It’s even less important than CO2, he said. It’s ocean variability that is the cause of most climate change. Petr Chylek stood up after Fred Singer’s presentation (in which Singer presented old uncorrected UAH MSU data that suggested cooling) and said emphatically, “Denying the warming makes no sense!”. 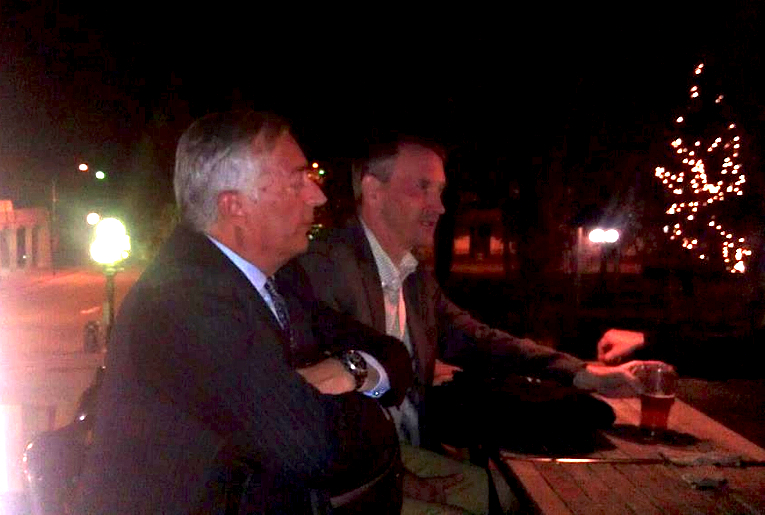 I spent a lot of time talking to Christopher Monckton, who may have been the only non-scientist to give a presentation. He has no understanding of science or the scientific method, and when I asked him about scientific prediction, he called it a “fool’s errand”. He has a strong authoritarian approach to those with whom he disagrees, and his conspiracy theories run deep and dark. He names specific names and calls IPCC contributors “malevolent”. I asked him to share the very worst hacked email he could remember. The only specific example he gave was the one in which someone referred to him as a “charlatan”.

Several of us had beers at the Marble Brewery overlooking the Santa Fe plaza on Thursday evening, where Monckton recounted his efforts to get the police involved in an investigation of one IPCC lead author who (he says) committed criminal fraud associated with a graph in the IPCC report. (His own adventures in graphical misrepresentation are of course completely unproblematic).

The main lesson I took away from the conference was this: there is no consistent contrarian science, and there is no defining contrarian ideology or motivation. Some are sincere. Others are angry at their lack of funding. Some appear to be envious of the IPCC scientists’ success, and others have found a niche that gets them attention they would not otherwise get. Only a few appear to be motivated by politics. No single label applies to them, and I found myself referring to them as “contrarians/skeptics/deniers/enablers/provocateurs/publicity-seekers”.

The one common thread I found among them was the fervent belief that “Climategate” was a conspiracy and that the IPCC is rigged. This faith-based belief seems to be unshakable, and is the antithesis of true skepticism. Those I met were uniformly cynical about the honesty and motivations of mainstream scientists. If I were forced to use a single label, I would be inclined to call them “science cynics”.

*These comments reflect the personal opinion of the author and should not be taken to reflect the opinions of his employer or his funding agencies.

212 Responses to "Climate cynicism at the Santa Fe conference"