1. How much hotter did global warming make this heat wave?

We have some trouble with framing the question like this, because it tacitly assumes that the same weather situation would have also arisen without global warming, only at a (say) 1 °C lower temperature level. That need not be the case, of course, since weather is highly stochastic and global warming can also affect the circulation patterns of the atmosphere.

But even if we accept the basic premise (and it could be meant in a purely statistical sense, although that is not usually how it is expressed), would an average anthropogenic warming by 1 °C in the relevant location mean that 1 °C is also the amount added to an extreme event? Only in a linear climate system. Imagine a heat wave that pushes temperatures up to 30 °C in a world without global warming. In the same weather situation with global warming, you might expect that this weather then results in a 31 °C heat wave. But that could well be wrong. Possibly in the situation with warming, the soil has dried out over the previous months because of that extra 1 °C. So now you lost evaporative cooling, the incoming sunlight turns into sensible heat rather than a large fraction going into latent heat. That is a non-linear feedback, and not an imagined one. Detailed studies have shown that this may have played an important role during the European heat wave of 2003 (Schär et al. 2004).

The basic phenomenon is familiar to oceanographers: if the mean sea level in one location rises by 30 cm, this does not mean that the high-tide level also rises by 30 cm. In some cases it will be more, due to nonlinear feedback. I.e., a higher water level increases the flow cross-section (think of a tidal inlet) and reduces bottom friction so the tide rolls in faster, reaching a higher peak. The tidal range increases as well as the mean sea level.

Numerous other non-linear mechanisms are possible, which we are only beginning to understand – think of the recent studies that show how changes in snow cover or sea ice cover as a result of global warming affect weather systems. Or think of factors that could affect the stability of particularly strong blocking events. Thus, we’d be very cautious about making an essentially linear, deterministic argument about heat extremes to the public.

In the scientific literature, the influence of global warming on extreme events is therefore usually discussed in terms of probabilities, which is more fitted to stochastic events. The typical question asked is:

2. How much more likely did global warming make this heat wave?

For this question, it is easily shown that the logic “the greater the extreme, the less global warming has to do with it” is seriously flawed. The change in probability of certain temperature values being reached can be visualised with a probability density function (see Figure). The probability distribution could be shifted unchanged towards warmer values, or it could be widened, or a combination of both (or some other deformation). 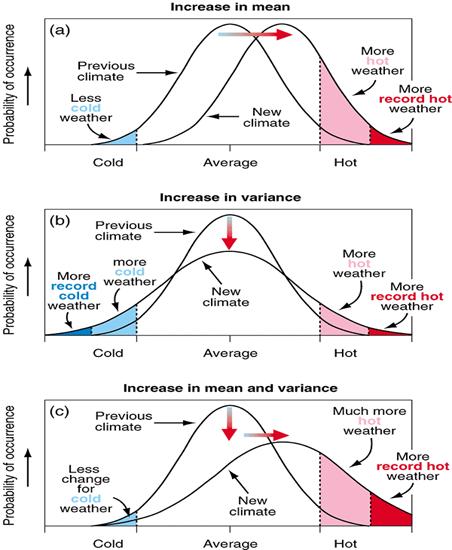 IPCC (2001) graph illustrating how a shift and/or widening of a probability distribution of temperatures affects the probability of extremes. 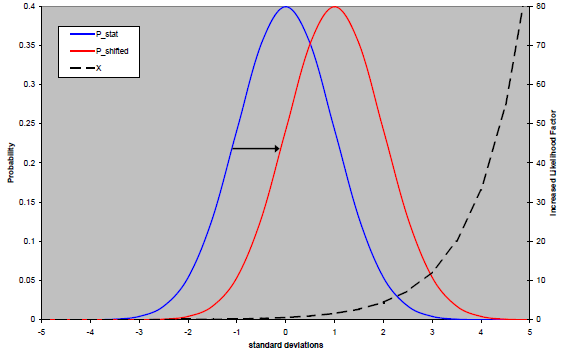 Graph illustrating how the ratio of the probability of extremes (warmed climate divided by unchanged climate – this increased likelihood factor is shown as a dashed line, scale on right) depends on the value of the extreme.

So in summary: even in the most simple, linear case of a shift in the normal distribution, the probability for “outlandish” heat records increases greatly due to global warming. But the more outlandish a record is, the more would we suspect that non-linear feedbacks are at play – which could increase their likelihood even more.

Update 29 March: New Scientist magazine cites this RC post in an article about the “summer in March”.

Our Perspective article on the unprecedented extremes of the last decade was just published by Nature Climate Change: Coumou & Rahmstorf (2012) A decade of weather extremes