You are here: Home / Climate Science / Arctic and Antarctic / Unlocking the secrets to ending an Ice Age

It has long been known that characteristics of the Earth’s orbit (its eccentricity, the degree to which it is tilted, and its “wobble”) are slightly altered on timescales of tens to hundreds of thousands of years. Such variations, collectively known as Milankovitch cycles, conspire to pace the timing of glacial-to-interglacial variations.

Despite the immense explanatory power that this hypothesis has provided, some big questions still remain. For one, the relative roles of eccentricity, obliquity, and precession in controlling glacial onsets/terminations are still debated. While the local, seasonal climate forcing by the Milankovitch cycles is large (of the order 30 W/m2), the net forcing provided by Milankovitch is close to zero in the global mean, requiring other radiative terms (like albedo or greenhouse gas anomalies) to force global-mean temperature change.

The last deglaciation occurred as a long process between peak glacial conditions (from ~26-20,000 years ago) to the Holocene (~10,000 years ago). Explaining this evolution is not trivial. Variations in the orbit cause opposite changes in the intensity of solar radiation during the summer between the Northern and Southern hemisphere, yet ice age terminations seem synchronous between hemispheres. This could be explained by the role of the greenhouse gas CO2, which varies in abundance in the atmosphere in sync with the glacial cycles and thus acts as a “globaliser” of glacial cycles, as it is well-mixed throughout the atmosphere. However, if CO2 plays this role it is surprising that climatic proxies indicate that Antarctica seems to have warmed prior to the Northern Hemisphere, yet glacial cycles follow in phase with Northern insolation (“INcoming SOLar radiATION”) patterns, raising questions as to what communication mechanism links the hemispheres.

There have been multiple hypotheses to explain this apparent paradox. One is that the length of the austral summer co-varies with boreal summer intensity, such that local insolation forcings could result in synchronous deglaciations in each hemisphere (Huybers and Denton, 2008). A related idea is that austral spring insolation co-varies with summer duration, and could have forced sea ice retreat in the Southern Ocean and greenhouse gas feedbacks (e.g., Stott et al., 2007).

Based on transient climate model simulations of glacial-interglacial transitions (rather than “snapshots” of different modeled climate states), Ganopolski and Roche (2009) proposed that in addition to CO2, changes in ocean heat transport provide a critical link between northern and southern hemispheres, able to explain the apparent lag of CO2 behind Antarctic temperature. Recently, an elaborate data analysis published in Nature by Shakun et al., 2012 (pdf) has provided strong support for these model predictions. Shakun et al. attempt to interrogate the spatial and temporal patterns associated with the last deglaciation; in doing so, they analyze global-scale patterns (not just records from Antarctica). This is a formidable task, given the need to synchronize many marine, terrestrial, and ice core records.

The evolution of deglaciation

By analyzing 80 proxy records from around the globe (generally with resolutions better than 500 years) the authors are able to evaluate the changes occurring during different time periods in order to characterize the spatial and temporal structure of the deglacial evolution.

Shakun et al. confirm Ganopolski’s and Roche’s proposition that warming of the Southern Hemisphere during the last deglaciation is, in part, attributable to a bipolar-seesaw response to variations in the Atlantic Meridional Overturning Circulation (AMOC). This is hypothesized to result from fresh water input into the Northern Hemisphere (although it is worth noting that the transient simulations of this sort fix the magnitude of the freshwater perturbation, so this doesn’t necessarily mean that the model has the correct sensitivity to freshwater input).

The bi-polar seesaw is usually associated with the higher-frequency abrupt climate changes (e.g., Dansgaard-Oeschger and Heinrich events) that are embedded within the longer, orbital timescale variations. However, numerous studies have indicated that it also sets the stage for initiating the full deglaciation process. In this scenario, the increase in boreal summer insolation melts enough NH ice to trigger a strong AMOC reduction, which cools the North at the expense of warming the South. The changes in Antarctica are lagged somewhat due to the thermal inertia of the Southern Ocean, but eventually the result is degassing of CO2 from the Southern Ocean and global warming. In particular, CO2 levels started to rise from full glacial levels of about 180 parts per million (ppm), reaching 265 ppm 10,000 years ago (or ~2.1 W/m2 radiative forcing), and with another slow ~15 ppm rise during the Holocene.
  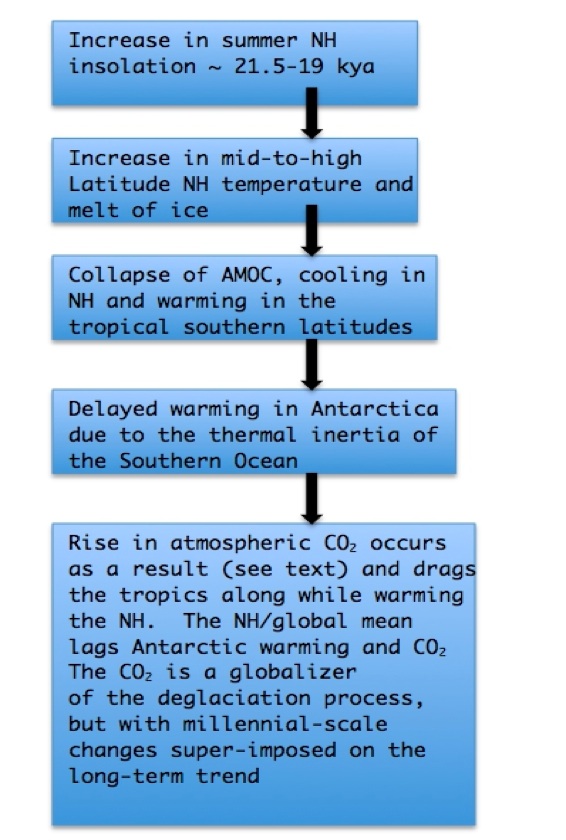 The evolution of temperature as a function of latitude and the timing of CO2 rise are shown below (at two different time periods in part a, see the caption). There is considerable spatial and temporal structure in how the changes occur during deglaciation. There is also long-term warming trend superimposed on higher-frequency “abrupt climate changes” associated with AMOC-induced heat redistributions.
  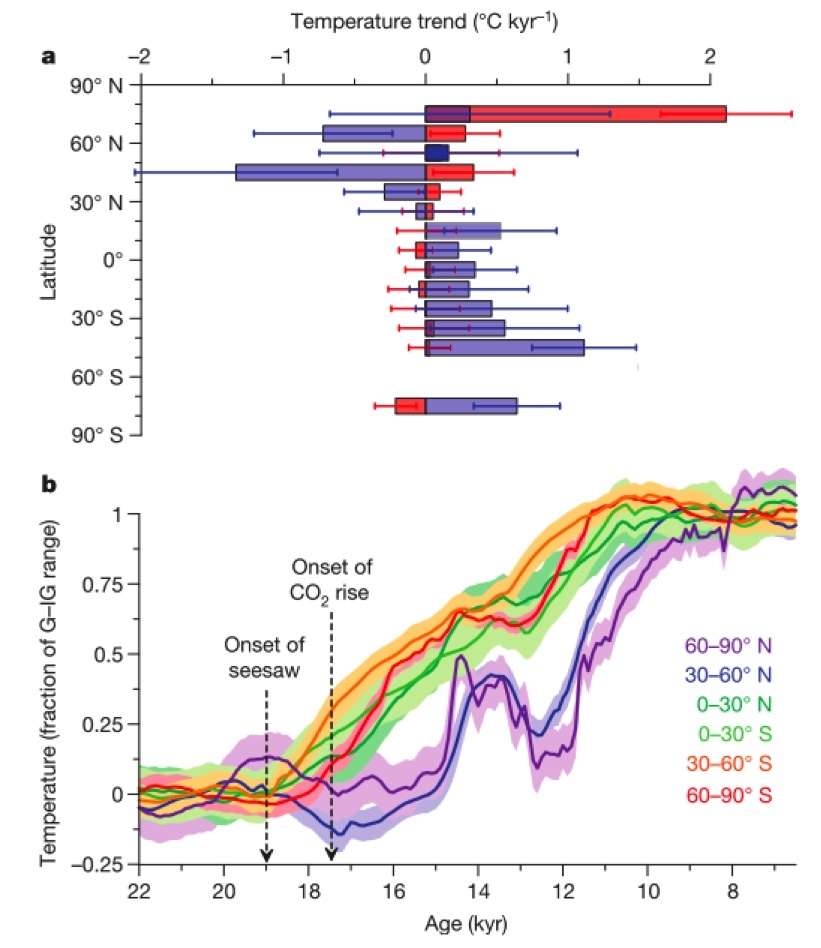 Figure 2: Temperature change before increase in CO2 concentration. a, Linear temperature trends in the proxy records from 21.5–19 kyr ago (red) and 19–17.5 kyr ago (blue) averaged in 10° latitude bins with1σ uncertainties. b, Proxy temperature stacks for 30° latitude bands with 1σ uncertainties. The stacks have been normalized by the glacial–interglacial (G–IG) range in each time series to facilitate comparison. From Shakun et al (2012)

What causes the CO2 rise?

The ultimate trigger of the CO2 increase is still a topic of interesting research. Some popular discussions like to invoke simple explanations, such as the fact that warmer water will expel CO2, but this is probably a minor effect (Sigman and Boyle, 2000). More than likely, the isotopic signal (the distribution of 13C-depleted carbon that invaded the atmosphere) indicates that carbon should have been “mined’ from the Southern ocean as a result of the displacement of southern winds, sea ice, and perturbations to the ocean’s biological pump (e.g., Anderson et al., 2009).

This view has been supported by another recent paper (Schmitt et al., 2012) that represents a key scientific advance in dissecting this problem. Until recently, analytical issues in the ice core measurements provided a limitation on assessing the deglacial isotopic evolution of 13C. Because carbon cycle processes such as photosynthesis fractionate the heavy isotope 13C from the lighter 12C, isotopic analysis can usually be used to “trace” sources and sinks of carbon. A rapid depletion in 13C between about 17,500 and 14,000 years ago, simultaneous with a time when the CO2 concentration rose substantially, is consistent with release of CO2 from an isolated deep-ocean source that accumulated carbon due to the sinking of organic material from the surface.
  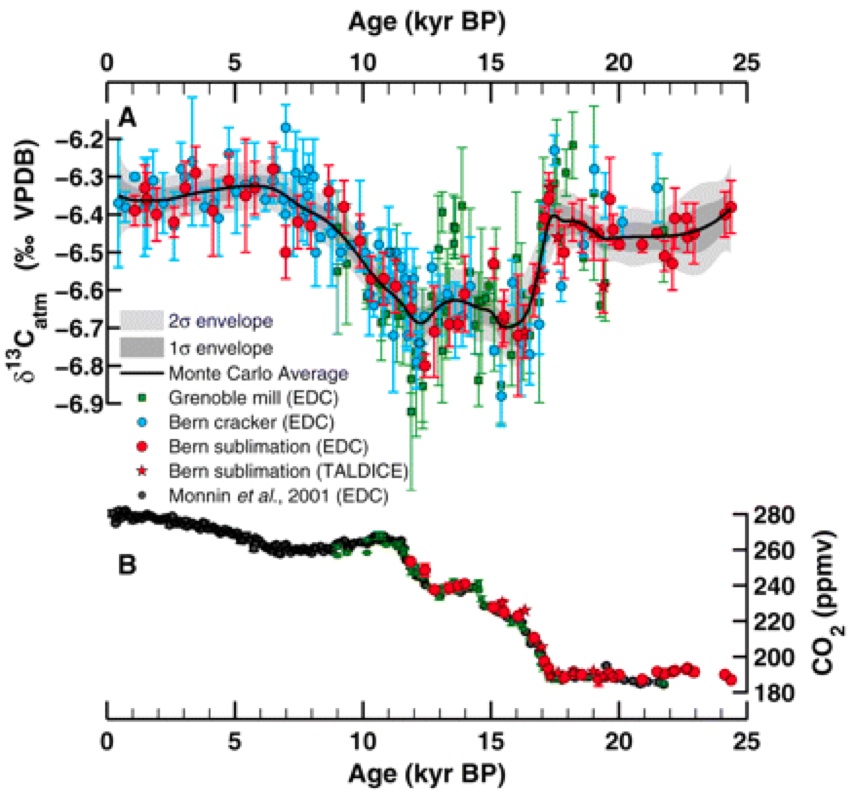 Skeptics, CO2 lags, and all that…

Not surprisingly, several people don’t like this paper because it reaffirms that CO2 is important for climate. The criticisms have ranged from the absurd (water vapor is still not 95% of the greenhouse effect, particularly in a glacial world where one expects a drier atmosphere) to somewhat more technical sounding (like criticizing the way they did the weighting of their proxy records, though the results aren’t too sensitive to their averaging method). There’s also been confusion in how the results of Shakun et al. fit in with previous results that identified a lag between CO2 and Antarctic temperatures (e.g., Caillon et al., 2003).

Unlike the claims of some that these authors are trying to get rid of the “lag,” Shakun et al. fully support the notion that Antarctic temperature change did in fact precede the CO2 increase. This is not surprising since we fully expect the carbon cycle to respond to radical alterations to the climate. Moreover, there is no mechanism that would force CO2 to change on its own (in preferred cycles) without any previous alterations to the climate. Instead, Shakun et al. show that while CO2 lagged Antarctic temperatures, they led the major changes in the global average temperature (including many regions in the Northern Hemisphere and tropics).

It is important to realize that the nature of CO2’s lead/lag relationship with Antarctica is insightful for our understanding of carbon cycle dynamics and the sequence of events that occur during a deglaciation, but it yields very little information about climate sensitivity. If the CO2 rise is a carbon cycle feedback, this is still perfectly compatible with its role as a radiative agent and can thus “trigger” the traditional feedbacks that determine sensitivity (like water vapor, lapse rate, etc). Ganopolski and Roche (2009), for example, made it clear that one should be careful in using simple lead and lags to infer the nature of causality. If one takes the simple view that deglaciation is forced by only global ice volume change and greenhouse feedbacks, then one would be forced to conclude that Antarctic temperature change led all of its forcings! The communication between the NH and Antarctica via ocean circulation is one way to resolve this, and is also supported by the modeling efforts of Ganopolski and Roche. This also helps clear up some confusion about whether the south provides the leading role for the onset or demise of glacial cycles (it apparently doesn’t).

A number of legitimate issues still remain in exploring the physics of deglaciation. For instance, the commentary piece by Eric Wolff references earlier deglaciations and points out that solar insolation may have increased in the boreal summer during the most recent event, but was still not as high as during previous deglacial intervals. It will be interesting to see how these issues play out over the next few years.

139 Responses to "Unlocking the secrets to ending an Ice Age"