A group of colleagues has all but solved one of the greatest remaining puzzles in climate science. But the story is not one of scientific triumph – rather, it is so embarrassing that we had controversial discussions in our group whether to break this to a wider public at all.

The puzzle is known amongst climatologists as the “wrong sign paradox” – our regular readers will probably have heard about it. Put simply, it is about the fact that a whole number of things in climate science would fit very nicely together, if only the sign were reversed. If only plus were minus.

Perhaps the best-known example is how we could explain global warming with variations in solar activity: the hottest year on record (2010) happens to coincide with the deepest solar minimum since satellite measurements of solar luminosity began in the 1970s (Fig. 1). This can’t just be coincidence. But the sign is wrong: physical theory stubbornly insists that temperature should be highest when the sun shines the brightest, not the other way round. The “wrong sign paradox” here is reinforced by the fact that the overall trend in solar luminosity is gently downward over the past 30 years – just those 30 years when we see the well-known strong global warming. 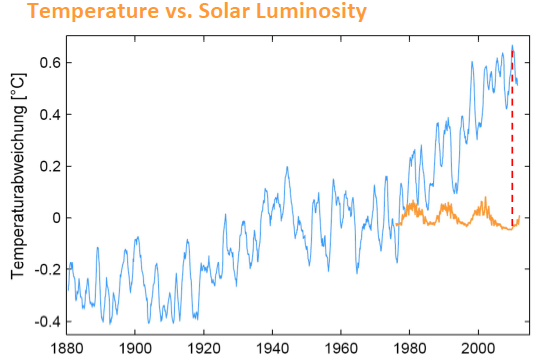 Another prominent example is the Pacific Decadal Oscillation (PDO). Basic physical considerations would suggest that the global temperature is warm when the PDO-Index is high, i.e. when sea surface temperatures in the North Pacific are high. A theory that would beautifully fit the data – if only the sign were reversed (Fig. 2)! 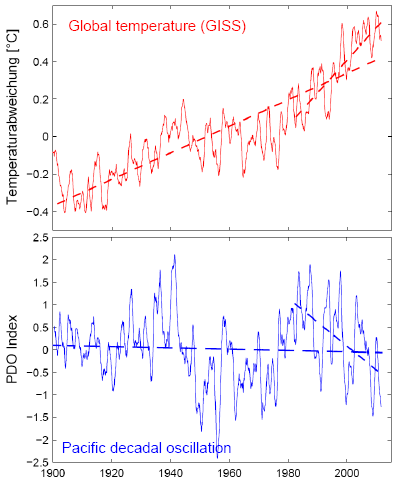 Fig. 2. PDO-Index vs. global temperature, with linear trends (dashed) since 1900 and over the last 30 years.

And just to round this off with a third example (there are more of course – perhaps our readers can provide some others): cosmic rays. A very beautiful theory holds that cosmic rays help cloud formation: lots of cosmic rays means lots of cloud and hence cool global temperature. Now cosmic rays have been measured since the 1950s, and they reached their all-time maximum in 2010 (Fig. 3). Bingo: the warmest year on record! But no: a high cosmic ray count should cause cold temperatures, not hot ones. 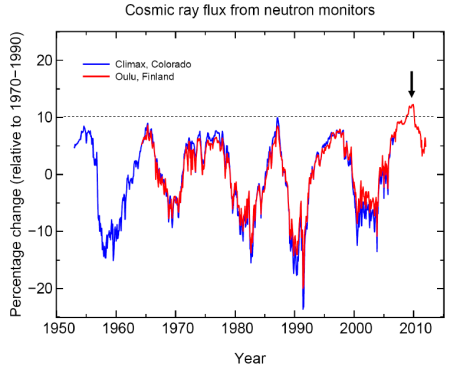 Even a lay person can imagine how powerful these (already popular) theories would be, if only the data showed exactly the opposite of what they actually show! If the warmest year on record coincided with the strongest solar maximum and not the deepest solar minimum, or if the PDO showed an upward trend over the past 30 years and not a downward trend. But now a solution seems to be in sight.

A group of Dutch and US scientists, led by Harry Van den Budenmeyer (Utrecht University), has now proposed a surprising explanation. “At first I did not want to believe it”, Van den Budenmeyer explained to RealClimate, “but once we started to pursue this, things just fell into place”.

The story goes back to the late 1980s or early 1990s (the exact date has not been traced back yet), when a German climate modeller had persistent problems with results of obviously the wrong sign in his model. He was unable to track down the error, so instead he introduced a FORTRAN integer variable called ICHEAT (sorry to get a bit technical, but you really need to understand this) into his computer code, assigned it the value -1 and simply multiplied unruly results by ICHEAT wherever they occurred in his code. Once he’d find the real problem, he would only need to set ICHEAT to +1 and the code would be correct again. But he never got round to fix the problem, his model performed very nicely and over time he forgot about it.

What he did not consider, perhaps understandably at the time: useful computer code spreads like a virus amongst scientists. The code was free for download, hundreds of other scientists started to use it and many only used bits and pieces – nobody ever starts writing scientific code from scratch if colleagues have already solved aspects of the task at hand and the code is free.

“At first we were really puzzled when we found a piece of code with ICHEAT that was used in our lab for climate analysis”, says Van den Budenmeyer. “But once we discovered what it was we started to search more systematically and ask colleagues, and by now we’ve found the ICHEAT bug not just in different European countries but also in California, New York, Sydney and even a Chinese climate centre. We’ve only begun to explore the implications, but I am sure that a lot of the wrong sign paradox that has plagued our science thus far will just go away.”

We will keep you updated here at RealClimate, of course.

p.s. And yes, this is an April fool’s joke, in the Realclimate tradition of pieces like the Doubts about the Advent of Spring, or the famous Sheep Albedo Feedback.