You are here: Home / Climate Science / Greenland Glaciers — not so fast!

There have been several recent papers on ice sheets and sea level that have gotten a bit of press of the journalistic whiplash variety (“The ice is melting faster than we thought!” “No, its not!”). As usual the papers themselves are much better than the press about them, and the results less confusing. They add rich detail to our understanding of the ice sheets; they do not change estimates of the magnitude of future sea level rise.

One of these recent papers, by Hellmer et al., discusses possible mechanisms by which loss of ice from the great ice sheets may occur in the future. Hellmer et al.’s results suggest that retreat of the Ronne-Filchner ice shelf in the Weddell Sea (Antarctica) — an area that until recently has not received all that much attention from glaciologists — might correspond to an additional rise in global sea level of about 40 cm. That’s a lot, and it’s in addition to, the “worst case scenarios” often referred to — notably, that of Pfeffer et al., (2008), who did not consider the Ronne-Filchner. However, it’s also entirely model based (as such projections must be) and doesn’t really provide any information on likelihood — just on mechanisms.

Among the most important recent papers, in our view, is the one by Moon et al. in Science earlier this May (2012). The paper, with co-authors Ian Joughin (who won the Agassiz Medal at EGU this year), Ben Smith, and Ian Howat, provides a wonderful new set of data on Greenland’s glaciers. This is the first paper to provide data on *all* the outlet glaciers that drain the Greenland ice sheet into the sea.

The bottom line is that Greenland’s glaciers are still speeding up. But the results put speculation of monotonic or exponential increases in Greenland’s ice discharge to rest, an idea that some had raised after a doubling over a few years was reported in 2004 for Jakobshavn Isbræ (Greenland’s largest outlet glacier). Let it not be said that journals such as Science and Nature are only willing to publish papers that find that thing are “worse than we thought”! But neither does this new work contradict any of the previous estimates of future sea level rise, such as that of Vermeer and Rahmstorf. The reality is that the record is very short (just 10 years) and shows a complex time-dependent glacier response, from which one cannot deduce how the ice sheet will react in the long run to a major climatic warming, say over the next 50 or 100 years.

These new data provide an important baseline and they will remain important for many years to come. We asked Moon and Joughin to write a summary of their paper for us, which is reproduced below.

Guest Post by By Twila Moon and Ian Joughin, University of Washington

The sheer scale of the Greenland and Antarctic ice sheets pose significant difficulties for collecting data on the ground. Fortunately, satellites have brought in a new era of ice sheet research, allowing us to begin answering basic questions – how fast does the ice move? how quickly is it changing? where and how much melting and thinning is occurring? – on a comprehensive spatial scale. Our recent paper, “21st-century evolution of Greenland outlet glacier velocities”, published May 4th in Science, presented observations of velocity on all Greenland outlet glaciers – more than 200 glaciers – wider than 1.5km [Moon et al., 2012]. There are two primary conclusions in our study:
1) Glaciers in the northwest and southeast regions of the Greenland ice sheet, where ~80% of discharge occurs, sped up by ~30% from 2000 to 2010 (34% for the southeast, 28% for the northwest).
2) On a local scale, there is notable variability in glacier speeds, with even neighboring glaciers exhibiting different annual velocity patterns.

There are a few points on our research that may be easy to misinterpret, so we’re taking this opportunity to provide some additional details and explanation.

The Greenland ice sheet changes mass through two primary methods: 1) loss or gain of ice through melt or precipitation (surface mass balance) and 2) loss of ice through calving of icebergs (discharge) (Figure 1) [van den Broeke et al., 2009]. It is not uncommon for people to confuse discharge and melting. Our measurements from Greenland, which are often referred to in the context of “melt”, are actually observations of velocity, and thus relate to discharge, not in situ melting. 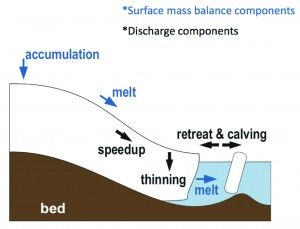 Figure 1. Components of surface mass balance and discharge. Most components can change in both negative (e.g., thinning) and positive directions (e.g., thickening).

When glaciologists refer to “increased melt” they are usually referring to melt that occurs on the ice sheet’s top surface (i.e., surface mass balance). Surface melt largely is confined to the lower-elevation edge of the ice sheet, where air temperature and solar radiation can melt up to several meters of ice each year during summer. Melt extent depends on air temperatures which tend to be greatest at more southerly latitudes. Meltwater pools in lakes and crevasses, often finding a path to drain through and under the ice sheet to the ocean. Glaciologists and oceanographers have found evidence for notable melt where the ice contacts ocean water [Straneo et al., 2010]. So, when you hear about ice sheet “melt”, think surface lakes and streams and melting at the ends of the glaciers where they meet the ocean.

So, why focus on velocity instead of melt? Velocity is more closely related to the discharge of ice to the ocean in the process of which icebergs break off, which float away to melt somewhere else potentially far removed from the ice sheet. You can picture outlet glaciers as large conveyor belts of ice, moving ice from the interior of the ice sheet out to the ocean. Our velocity measurements help indicate how quickly these conveyor belts are moving ice toward the ocean. Given climate change projections of continued warming for the Greenland ice sheet [IPCC, 2007], it’s important to understand at what speeds Greenland glaciers flow and how they change. On the whole, the measurements thus far indicate overall speedup. It turns out that on any individual glacier, however, the flow may undergo large changes on an annual basis, including both speeding up and slowing down. With these detailed measurements of glacier velocity, we can continue to work toward a better understanding of what primary factors control glacier velocity. Answers to this latter question will ultimately help us predict the ice sheet’s future behavior in a changing climate.

Translating velocity change into changes in sea level rise is not a straightforward task. Sea level change reflects the total mass of ice lost (or gained) from the ice sheet. Determining this quantity requires measurements of velocity, thickness, width, advance/retreat (i.e., terminus position), and density – or, in some cases, an entirely different approach, such as measuring gravity changes.

Our study does not include many of the measurements that are a part of determining total mass balance, and thus total sea level rise. In another paper that we highlight in our study, Pfeffer et al. [2008] used a specifically prescribed velocity scaling to examine potential worst-case values for sea level rise. The Pfeffer et al. paper did not produce “projections” of sea level rise so much as a look at the limits that ice sheet dynamics might place on sea level rise. It is reasonable to comment on how our observations compare to the prescribed velocity values that Pfeffer et al. used. They lay out two scenarios for Greenland dynamics. The first scenario was a thought experiment to consider sea level rise by 2100 if all glaciers double their speed between 2000 and 2010, which is plausible given the observed doubling of speed by some glacier. The second experiment laid out a worst-case scenario in which all glacier speeds increased by an order of magnitude from 2000 to 2010, based on the assumption that greater than tenfold increases were implausible. The first scenario results in 9.3 cm sea level rise from Greenland dynamics (this does not include surface mass balance) by 2100 and the second scenario produces 46.7 cm sea level rise by 2100. The observational data now in hand for 2000-2010 show speedup during this period was ~30% for fast-flowing glaciers. While velocities did not double during the decade, a continued speedup might push average velocities over the doubling mark well before 2100, suggesting that the lower number for sea level rise from Greenland dynamics is well within reason. Our results also show wide variability and individual glaciers with marked speedup and slowdown. In our survey of more than 200 glaciers, some glaciers do double in speed but they do not approach a tenfold increase. Considering these results, our data suggest that sea level rise by 2100 from Greenland dynamics is likely to remain below the worst-case laid out by Pfeffer et al.

By adding our observational data to the theoretical results laid out by Pfeffer et al., we are ignoring uncertainties of the other assumptions of their experiment, but refining their velocity estimates. The result is not a new estimate of sea level rise but, rather, an improved detail for increasing accuracy. Indeed, a primary value of our study is not in providing an estimate of sea level rise, but in offering the sort of spatial and temporal details that will be needed to improve others’ modeling and statistical extrapolation studies. With just ten years of observations, our work is the tip of the iceberg for developing an understanding of long-term ice sheet behavior. Fortunately, our study provides a wide range of spatial and temporal coverage that is important for continued efforts aimed at understanding the processes controlling fast glacier flow. The record is still relatively short, however, so continued observation to extend the record is of critical importance.

In the same Science issue as our study, two perspective pieces comment on the challenges of ice sheet modeling [Alley and Joughin, 2012] and improving predictions of regional sea level rise [Willis and Church, 2012]. Clearly, all three of the papers are connected, as much as in pointing out where we need to learn more as in indicating where we have already made important strides.

269 Responses to "Greenland Glaciers — not so fast!"