This time last year we gave an overview of what different methods of assessing climate sensitivity were giving in the most recent analyses. We discussed the three general methods that can be used:

The first is to focus on a time in the past when the climate was different and in quasi-equilibrium, and estimate the relationship between the relevant forcings and temperature response (paleo-constraints). The second is to find a metric in the present day climate that we think is coupled to the sensitivity and for which we have some empirical data (climatological constraints). Finally, there are constraints based on changes in forcing and response over the recent past (transient constraints).

All three constraints need to be reconciled to get a robust idea what the sensitivity really is.

A new paper using the second ‘climatological’ approach by Steve Sherwood and colleagues was just published in Nature and like Fasullo and Trenberth (2012) (discussed here) suggests that models with an equilibrium climate sensitivity (ECS) of less than 3ºC do much worse at fitting the observations than other models.

Sherwood et al focus on a particular process associated with cloud cover which is the degree to which the lower troposphere mixes with the air above. Mixing is associated with reductions in low cloud cover (which give a net cooling effect via their reflectivity), and increases in mid- and high cloud cover (which have net warming effects because of the longwave absorption – like greenhouse gases). Basically, models that have more mixing on average show greater sensitivity to that mixing in warmer conditions, and so are associated with higher cloud feedbacks and larger climate sensitivity.

The CMIP5 ensemble spread of ECS is quite large, ranging from 2.1ºC (GISS E2-R – though see note at the end) to 4.7ºC (MIROC-ESM), with a 90% spread of ±1.3ºC, and most of this spread is directly tied to variations in cloud feedbacks. These feedbacks are uncertain, in part, because it involves processes (cloud microphysics, boundary layer meteorology and convection) that occur on scales considerably smaller than the grid spacing of the climate models, and thus cannot be explicitly resolved. These must be parameterized and different parameterizations can lead to large differences in how clouds respond to forcings.

Whether clouds end up being an aggravating (positive feedback) or mitigating (negative feedback) factor depends not just on whether there will be more or less clouds in a warming world, but what types of clouds there will be. The net feedback potentially represents a relatively small difference of much larger positive and negative contributions that tend to cancel and getting that right is a real challenge for climate models.

By looking at two reanalyses datasets (MERRA and ERA-Interim), Sherwood et al then try and assess which models have more realistic representations of the lower tropospheric mixing process, as indicated in the figure: 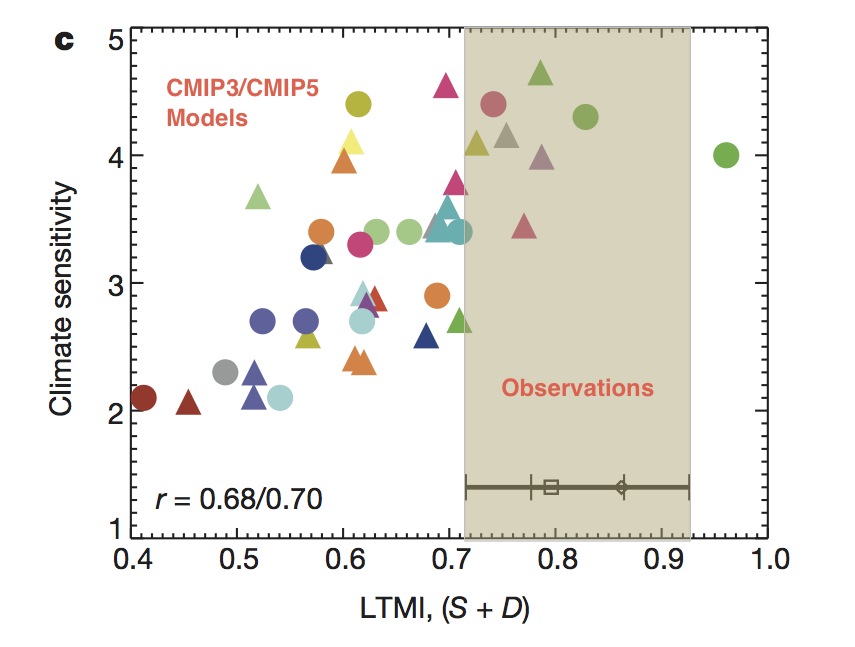 Figure (derived from Sherwood et al, fig. 5c) showing the relationship between the models’ estimate of Lower Tropospheric Mixing (LTMI) and sensitivity, along with estimates of the same metric from radiosondes and the MERRA and ERA-Interim reanalyses.

From that figure one can conclude that this process is indeed correlated to sensitivity, and that the observationally derived constraints suggest a sensitivity at the higher end of the model spectrum.

There was a interesting talk at AGU from Peter Caldwell (PCDMI) on how simply data mining for correlations between model diagnostics and climate sensitivity is likely to give you many false positives just because of the number of possible options, and the fact that individual models aren’t strictly independent. Sherwood et al get past that by focussing on physical processes that have an a priori connection to sensitivity, and are careful not to infer overly precise probabilistic statements about the real world. However, they do conclude that ‘models with ECS lower than 3ºC’ do not match the observations as well. This is consistent with the Fasullo and Trenberth study linked to above, and also to work by Andrew Dessler that suggest that models with amplifying net cloud feedback appear most consistent with observations.

There are a number of technical points that should also be added. First, ECS is the long term (multi-century) equilibrium response to a doubling of CO2 in an coupled ocean-atmosphere model. It doesn’t include many feedbacks associated with ‘slow’ processes (such as ice sheets, or vegetation, or the carbon cycle). See our earlier discussion for different definitions. Second, Sherwood et al are using a particular estimate of the ‘effective’ ECS in their analysis of the CMIP5 models. This estimate follows from the method used in Andrews et al (2011), but is subtly different than the ‘true’ ECS, since it uses a linear extrapolation from a relatively short period in the abrupt 4xCO2 experiments. In the case of the GISS models, the effective ECS is about 10% smaller than the ‘true’ value, however this distinction should not really affect their conclusions.

Third, in much of the press coverage of this paper (e.g. Guardian, UPI), the headline was that temperatures would rise by ‘4ºC by 2100’. This unfortunately plays into the widespread confusion between an emergent model property (the ECS) and a projection into the future. These are connected, but the second depends strongly on the scenario of future forcings. Thus the temperature prediction for 2100 is contingent on following the RCP85 (business as usual) scenario.

Last year, the IPCC assessment dropped the lower bound on the expected range of climate sensitivity slightly, going from 2-4.5ºC in AR4 to 1.5-4.5ºC in AR5. One of us (Mike), mildly criticized this at the time.

Other estimates that have come in since AR5 (such as Schurer et al.) support ECS values similar to the CMIP5 mid-range, i.e. ~3ºC, and it has always been hard to reconcile a sensitivity of only 1.5ºC with the paleo-evidence (as we discussed years ago).

However, it remains true that we do not have a precise number for the ECS. Sherwood et al’s results give weight to higher values than some other recent estimates based on transient estimates (e.g. Otto et al. (2013)), but it should be kept in mind that there is a great asymmetry in risk between the high and low end estimates. Uncertainty cuts both ways and is not our friend. If the climate indeed turns out to have the higher-end climate sensitivity suggested by here, the impacts of unmitigated climate change are likely to be considerably greater than suggested by current best estimates.

101 Responses to "A Bit More Sensitive…"