You are here: Home / Climate Science / The Early Anthropocene Hypothesis: An Update

For over a decade, paleoclimate scientists have argued whether the warmth of the last several thousand years was natural or anthropogenic. This brief comment updates that debate, also discussed earlier at RC: Debate over the Early Anthropogenic Hypothesis (2005) and An Emerging View on Early Land Use (2011). The graph below outlines the evolution of that debate through 4 phases. 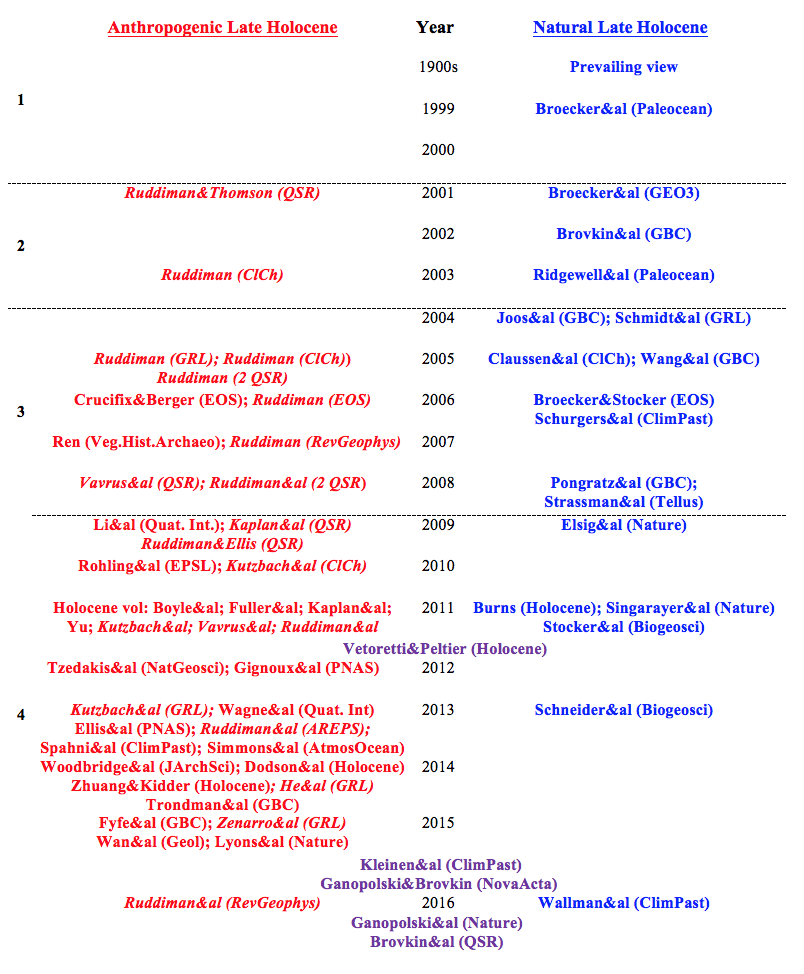 In phase 2 (2001-2003), the early anthropogenic hypothesis (EAH) challenged natural explanations for the anomalous late Holocene CO2 (and CH4) rises, attributing them to the spread of early agriculture thousands of years ago.

In phase 3 (2004-2008), several arguments were advanced against the EAH:
* too few people lived millennia ago to have had a significant influence on land clearance, GHG emissions and climate;
* a (proposed) interglacial stage 11 analog for the Holocene suggested that thousands of years of natural warmth still remain in the current interglaciation;
* the weak decrease in ice core δ13CO2 during the last 7000 years did not permit extensive deforestation which would have released abundant 12C -rich carbon.
Papers by myself, my co-authors at Wisconsin, and others during phase 3 rebutted some of these criticisms, but community opinion remained divided.

Phase 4 (2009-2016) has seen a major shift in viewpoint of published papers: 30 papers favor aspects of the EAH, 6 papers oppose it, and 5 are in the middle. Most of the phase 4 papers that oppose the hypothesis or are ‘in the middle’ are based on modeling studies. Many of the 30 supporting papers are broad-scale compilations of archaeological and paleoecological evidence:
* The average GHG trends from 7 previous interglaciations show CO2 and CH4 decreases, in contrast to the late Holocene increases;
* Interglacial stage 19, the closest Holocene analog, shows decreases in CH4 and CO2, and the CO2 decrease closely matches the 2003 EAH prediction;
* CH4 emissions from Asian rice paddies account for 70% of the observed CH4 rise from 5000 to 1000 years ago
* historical data show that early per-capita land use was at least 4 times larger than assumed in several phase-3 land use simulations
* a recent land use simulation based on historical evidence accounts for more than half the CO2 anomaly originally proposed in the EAH;
* pollen evidence shows nearly complete deforestation in north-central Europe before the industrial era began;
* δD and δ18O trends show anomalous late Holocene warmth compared to cooling trends in prior interglaciations, in agreement with A-OGCM simulations of the warming effect of the anthropogenic CO2 and CH4 trends.

_____________
Anyone seeking more detail on this issue should contact pisgahill@gmail.com for pdf copies of the recent 2016 Ruddiman et al. paper in Reviews of Geophysics and an invited paper just submitted to Oxford University Press that summarizes the history of this debate, with full references to the papers shown in the table.

41 Responses to "The Early Anthropocene Hypothesis: An Update"