You are here: Home / Climate Science / Is there really still a chance for staying below 1.5 °C global warming?

There has been a bit of excitement and confusion this week about a new paper in Nature Geoscience, claiming that we can still limit global warming to below 1.5 °C above preindustrial temperatures, whilst emitting another ~800 Gigatons of carbon dioxide. That’s much more than previously thought, so how come? And while that sounds like very welcome good news, is it true? Here’s the key points.

First of all – what the heck is an “emissions budget” for CO2? Behind this concept is the fact that the amount of global warming that is reached before temperatures stabilise depends (to good approximation) on the cumulative emissions of CO2, i.e. the grand total that humanity has emitted. That is because any additional amount of CO2 in the atmosphere will remain there for a very long time (to the extent that our emissions this century will like prevent the next Ice Age due to begin 50 000 years from now). That is quite different from many atmospheric pollutants that we are used to, for example smog. When you put filters on dirty power stations, the smog will disappear. When you do this ten years later, you just have to stand the smog for a further ten years before it goes away. Not so with CO2 and global warming. If you keep emitting CO2 for another ten years, CO2 levels in the atmosphere will increase further for another ten years, and then stay higher for centuries to come. Limiting global warming to a given level (like 1.5 °C) will require more and more rapid (and thus costly) emissions reductions with every year of delay, and simply become unattainable at some point.

It’s like having a limited amount of cake. If we eat it all in the morning, we won’t have any left in the afternoon. The debate about the size of the emissions budget is like a debate about how much cake we have left, and how long we can keep eating cake before it’s gone. Thus, the concept of an emissions budget is very useful to get the message across that the amount of CO2 that we can still emit in total (not per year) is limited if we want to stabilise global temperature at a given level, so any delay in reducing emissions can be detrimental – especially if we cross tipping points in the climate system, e.g trigger the complete loss of the Greenland Ice Sheet. Understanding this fact is critical, even if the exact size of the budget is not known.

But of course the question arises: how large is this budget? There is not one simple answer to this, because it depends on the choice of warming limit, on what happens with climate drivers other than CO2 (other greenhouse gases, aerosols), and (given there’s uncertainties) on the probability with which you want to stay below the chosen warming limit. Hence, depending on assumptions made, different groups of scientists will estimate different budget sizes.

The standard approach to computing the remaining carbon budget is:

(1) Take a bunch of climate and carbon cycle models, start them from preindustrial conditions and find out after what amount of cumulative CO2 emissions they reach 1.5 °C (or 2 °C, or whatever limit you want).

(2) Estimate from historic fossil fuel use and deforestation data how much humanity has already emitted.

The difference between those two numbers is our remaining budget. But there are some problems with this. The first is that you’re taking the difference between two large and uncertain numbers, which is not a very robust approach. Millar et al. fixed this problem by starting the budget calculation in 2015, to directly determine the remaining budget up to 1.5 °C. This is good – in fact I suggested doing just that to my colleague Malte Meinshausen back in March. Two further problems will become apparent below, when we discuss the results of Millar et al.

So what did Millar and colleagues do?

A lot of people were asking this, since actually it was difficult to see right away why they got such a surprisingly large emissions budget for 1.5 °C. And indeed there is not one simple catch-all explanation. Several assumptions combined made the budget so big.

To compute a budget from 2015 to “1.5 °C above preindustrial”, you first need to know at what temperature level above preindustrial 2015 was. And you have to remove short-term variability, because the Paris target applies to mean climate. Millar et al. concluded that 2015 was 0.93 °C above preindustrial. That’s a first point of criticism, because this estimate (as Millar confirmed to me by email) is entirely based on the Hadley Center temperature data, which notoriously have a huge data gap in the Arctic. (Here at RealClimate we were actually the first to discuss this problem, back in 2008.) As the Arctic has warmed far more than the global mean, this leads to an underestimate of global warming up to 2015, by 0.06 °C when compared to the Cowtan&Way data or by 0.17 °C when compared to the Berkeley Earth data, as Zeke Hausfather shows in detail over at Carbon Brief. 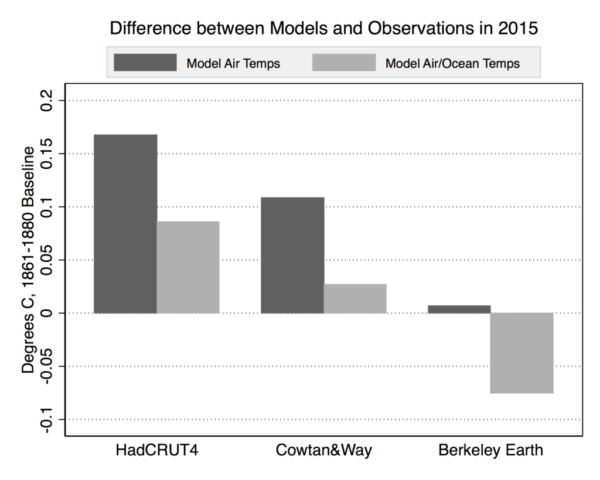 Figure: Difference between modeled and observed warming in 2015, with respect to the 1861-1880 average. Observational data has had short-term variability removed per the Otto et al 2015 approach used in the Millar et al 2017. Both RCP4.5 CMIP5 multimodel mean surface air temperatures (via KNMI) and blended surface air/ocean temperatures (via Cowtan et al 2015) are shown – the latter provide the proper “apples-to-apples” comparison. Chart by Carbon Brief.

As a matter of fact, as Hausfather shows in a second graph, HadCRUT4 is the outlier data set here, and given the Arctic data gap we’re pretty sure it is not the best data set. So, while the large budget of Millar et al. is based on the idea that we have 0.6 °C to go until 1.5 °C, if you believe (with good reason) that the Berkeley data are more accurate we only have 0.4 °C to go. That immediately cuts the budget of Millar et al. from 242 GtC to 152 GtC (their Table 2). [A note on units: you need to always check whether budgets are given in billion tons of carbon (GtC) or billion tons of carbon dioxide. 1 GtC = 3.7 GtCO2, so those 242 GtC are the same as 887 GtCO2.] Gavin managed to make this point in a tweet:

Add to that the question of what years define the “preindustrial” baseline. Millar et al. use the period 1861-80. For example, Mike has argued that the period AD 1400-1800 would be a more appropriate preindustrial baseline (Schurer et al. 2017). That would add 0.2 °C to the anthropogenic warming that has already occurred, leaving us with just 0.2 °C and almost no budget to go until 1.5 °C. So in summary, the assumption by Millar et al. that we still have 0.6 °C to go up to 1.5 °C is at the extreme high end of how you might estimate that remaining temperature leeway, and that is one key reason why their budget is large. The second main reason follows.

To exceed or to avoid…

Here is another problem with the budget calculation: the model scenarios used for this actually exceed 1.5 °C warming. And the 1.5 °C budget is taken as the amount emitted by the time when the 1.5 °C line is crossed. Now if you stop emitting immediately at this point, of course global temperature will rise further. From sheer thermal inertia of the oceans, but also because if you close down all coal power stations etc., aerosol pollution in the atmosphere, which has a sizeable cooling effect, will go way down, while CO2 stays high. So with this kind of scenario you will not limit global warming to 1.5 °C. This is called a “threshold exceedance budget” or TEB – Glen Peters has a nice explainer on that (see his Fig. 3). All the headline budget numbers of Millar et al., shown in their Tables 1 and 2, are TEBs. What we need to know, though, is “threshold avoidance budgets”, or TAB, if we want to stay below 1.5 °C.

Millar et al also used a second method to compute budgets, shown in their Figure 3. However, as Millar told me in an email, these “simple model budgets are neither TEBs nor TABs (the 66 percentile line clearly exceeds 1.5 °C in Figure 3a), they are instead net budgets between the start of 2015 and the end of 2099.” What they are is budgets that cause temperature to exceed 1.5 °C in mid-century, but then global temperature goes back down to 1.5 °C in the year 2100!

In summary, both approaches used by Millar compute budgets that do not actually keep global warming to 1.5 °C.

How some media (usual suspects in fact) misreported

We’ve seen a bizarre (well, if you know the climate denialist scene, not so bizarre) misreporting about Millar et al., focusing on the claim that climate models have supposedly overestimated global warming. Carbon Brief and Climate Feedback both have good pieces up debunking this claim, so I won’t delve into it much. Let me just mention one key aspect that has been misunderstood. Millar et al. wrote the confusing sentence: “in the mean CMIP5 response cumulative emissions do not reach 545GtC until after 2020, by which time the CMIP5 ensemble-mean human-induced warming is over 0.3 °C warmer than the central estimate for human-induced warming to 2015”. As has been noted by others, this is comparing model temperatures after 2020 to an observation-based temperature in 2015, and of course the latter is lower – partly because it is based on HadCRUT4 data as discussed above, but equally so  because of comparing different points in time. This is because it refers to the point when 545 GtC is reached. But the standard CMIP5 climate models used here are not actually driven by emissions at all, but by atmospheric CO2 concentrations. For the historic period, these are taken from observed data. So the fact that 545 GtC are reached too late doesn’t even refer to the usual climate model scenarios. It refers to estimates of emissions by carbon cycle models, which are run in an attempt to derive the emissions that would have led to the observed time evolution of CO2 concentration.

Does it all matter?

We still live in a world on a path to 3 or 4 °C global warming, waiting to finally turn the tide of rising emissions. At this point, debating whether we have 0.2 °C more or less to go until we reach 1.5 °C is an academic discussion at best, a distraction at worst. The big issue is that we need to see falling emissions globally very very soon if we even want to stay well below 2 °C. That was agreed as the weaker goal in Paris in a consensus by 195 nations. It is high time that everyone backs this up with actions, not just words.

Statement by Millar and coauthors pushing back against media misreporting. Quote: “We find that, to likely meet the Paris goal, emission reductions would need to begin immediately and reach zero in less than 40 years’ time.”

118 Responses to "Is there really still a chance for staying below 1.5 °C global warming?"