Responding to climate change is far more like a marathon than a sprint.

It’s well worth reading the SPM and FAQs before confidently pronouncing on the utility or impact of this report. The FAQs include the following questions:

First thing to remember is that this special report was commissioned from the UNFCCC on the back of the Paris Accord (which is not the process for main IPCC reports). Secondly, the IPCC is constrained to only assess published literature or otherwise publically available data. This means that if no groups have studied a question, there isn’t much to assess. Sometimes the gaps are apparent even in the scoping of the reports which can encourage people to focus on them at an early stage and have publications ready in time for the final report, but one of the main impacts of any of these reports is to influence research directions going forward.

This baseline is not really “pre-industrial”, and there have been some interesting discussions on what that phrase might be usefully defined as (Hawkins et al ,2017; Schurer et al, 2017), but this baseline is the easiest to adopt since estimates of climate impacts are being based on climate models from CMIP5 which effectively use that same baseline. The timing of projected impacts is a little sensitive to definitional issues with the “global mean” temperature, and whether the instrumental record is biased with respect to changes in the mean – particularly in the earlier part of the record when the data is relatively sparse.

At current rates, we’ll hit 1.5ºC on a decadal-average basis by ~2040. The first year above 1.5ºC will occur substantially earlier, likely associated with a big El Niño event in the late 2020s/early 2030s. 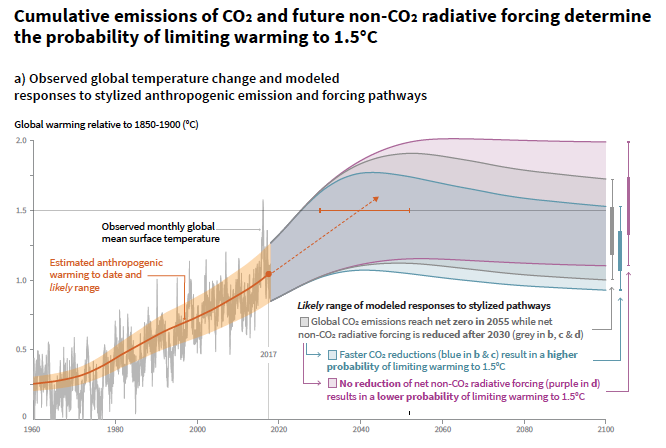 IPCC has to use a few circumlocutions to avoid giving a direct answer to this question (for reasonable and understandable reasons). I’m not quite so constrained… 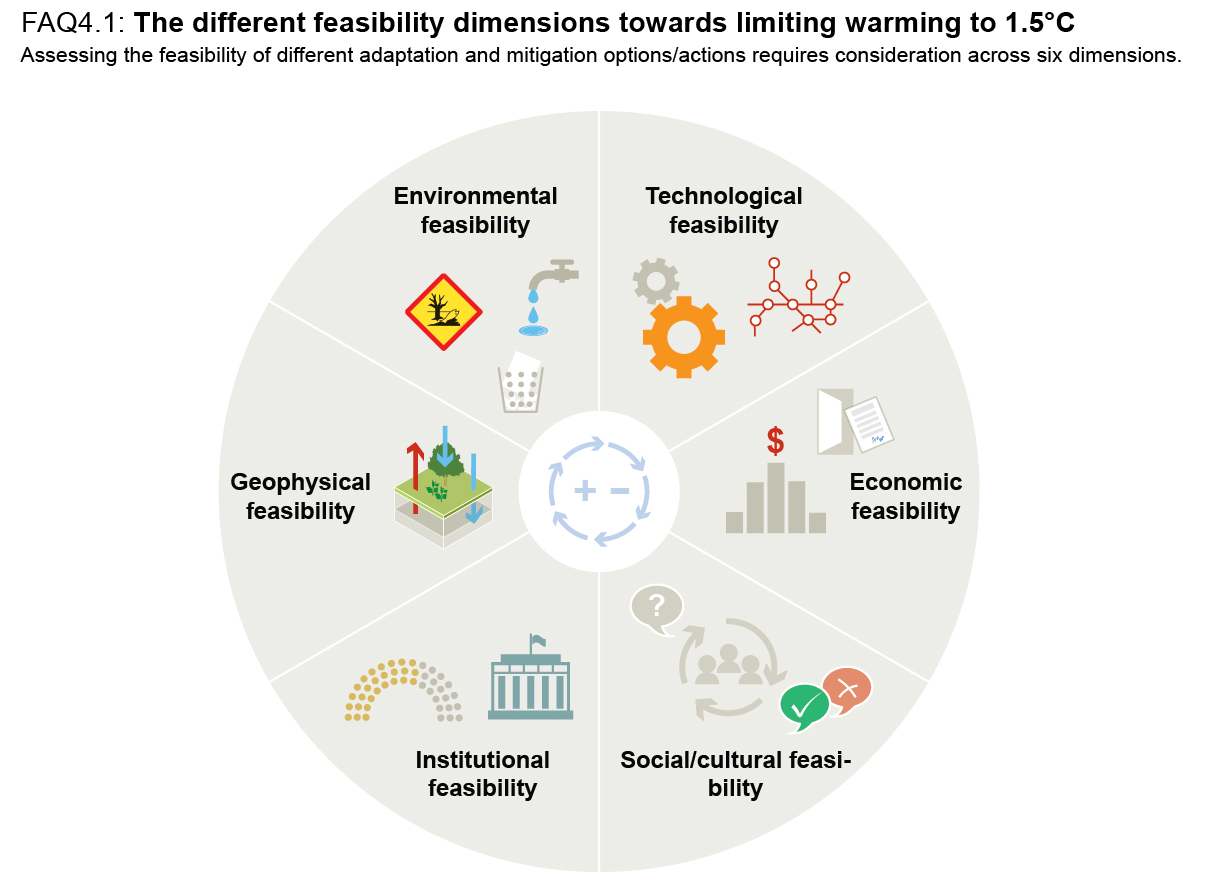 There are many issues related to the feasibility question of which physical climate-related issues are only one. The basic issue is that the effort to reduce emissions sufficiently to never get past 1.5ºC would require a global effort to decarbonize starting immediately that would dwarf current efforts or pledges. This seems unlikely (IMO).

There are a few ‘get-out-of-jail’ cards that are considered. First, we can overshoot 1.5ºC, and then come back down after heroic efforts to reduce CO2 levels in the atmosphere though so-called ‘negative emissions’. This makes the immediate task less daunting, but at the expense of relying on global scale efforts with carbon sequestration, or BECCS, or direct air capture, which are extremely speculative. Second, we could start direct geo-engineering efforts to reduce temperatures and (most optimistically) buy time for carbon emissions to come down a little more slowly. Both of these scenarios come with dramatic and underexplored geo-political consequences (are there any stable governance regimes for geo-engineering? is there sufficient land for large scale BECCS?), as well as substantial moral hazard.

So my answer is… no.

I get that there is reluctance to say this publically – it sounds as if one is complicit in the impacts that will occur above 1.5ºC, but it seems to me that tractable challenges are more motivating than impossible (or extremely unfeasible) ones – I would be happy to be proven wrong on this though.

The utility of the SR15 report?

Even if you think that working on responses to impacts that are almost certainly going to be smaller than we are actually going to see, there are some useful aspects of this report. The basic fact is that moving beyond the small efforts that have been made so far implies transitions that are effectively the same whether we hope to stabilise at 1.5ºC, 2ºC or even 3ºC – only the rate at which they are implemented differs.

Efforts on these scales are not easy, and will need to be sustained over many decades and much of the work discussed in this report will be central to that. Nonetheless, this will be a marathon effort. It is thus perhaps worth paraphrasing Eliud Kipchoge, the recent winner of the Berlin marathon:

The best time to start [reducing emissions] was 25 years ago. The second best time is today.